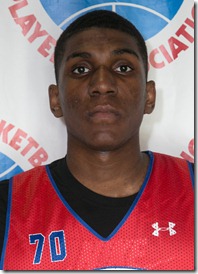 When Michigan played Louisville in the National Title game in April, the basketball world was transfixed — not just because it was the final game of the season, but because it was a superbly played game by both teams.

One of those people who was especially interested was 2014 stretch forward Kevon Looney.

Looney had the opportunity to be in Atlanta during Final Four weekend and actually watched the semifinal games live at the Georgia Dome.

Michigan hopes Looney especially enjoyed what he saw from one of the freshman standout Wolverines: specifically, Glenn Robinson III. While Looney, at 6-foot-8, offers a bit more size than Robinson, he offers a similar skill set.

Looney is a talented athlete with an extremely versatile game: he can handle the ball on the perimeter, shoot from range and take the ball to the hoop with ease, using his height as well as his shockingly long reach. While the similarities in their respective games are undeniable, Looney was especially focused Robinson’s game because he had played against Michigan’s talented freshman.

“I look at it a lot because when I was a freshman, I played against Glenn Robinson. He was pretty good,” Looney said. “I didn’t know he was gonna be that good when he first stepped into college so they obviously had to do something to make him get to that next level. He’s a great player, and I saw him get better throughout the season.”

Looney has established himself in his high school career as a great player in his own right. The Milwaukee native came in at number nine in ESPN’s updated recruiting rankings for the class of 2014 and has a significant number of schools after his services; Michigan State, Florida, Duke and Wisconsin have all offered.

Michigan has expressed interest in Looney for quite some time, and the interest is mutual. Looney references Michigan’s recent success and the system John Beilein has in place as factors that could attract him to Ann Arbor.

“They’re a good team, they win,” Looney said. “When I went to the Final Four, their fans were crazy. They just have I great system that I think I could play well in.”

Contact between Looney and Michigan continues to be consistent, with Looney saying he receives regular texts and calls from John Beilein and LaVall Jordan.

“I have contact with Michigan, Beilein calls me, texts me. LaVall Jordan talks to me a lot. So I have a pretty good relationship with Michigan.”

In fact, the only thing keeping Looney from receiving an offer already is a visit to Michigan’s campus and Beilein’s hard-and-fast policy not to offer players until he sees them in Ann Arbor. In the coming months, Looney said he will begin to pare down his list of schools to five before taking his five allotted official visits.

“I’m done with unofficial visits,” Looney said. “I’m planning on taking official visits in August and in the fall. I want to have a decision before I start my high school season in November. I plan on cutting my list down to five at the end of July.”

Trimming the list is a process that takes into account many factors, but two important ones for Looney are 1) whether or not a program places its players on track to get drafted and 2) the success of their freshmen.

“I look at NBA players that went there and had size like me because that’s my number one dream is to play in the NBA,” Looney said. “I look at like freshman success, like Glenn Robinson, he played good, he came in, he fitted well. I just look at my position. If I see a player that’s doing good, I think I can do the same.”

At the NBPA camp, Looney indicated that when it’s all said and done, Michigan has a good chance to remain on his short list at the end of the summer when he plans his five official visits.

“They have a good chance [to get an official visit]. I have a list (right now), I wouldn’t say it’s at exactly 10, but they’re in that list,” Looney said. “So when I narrow it down, they have a pretty good chance.”