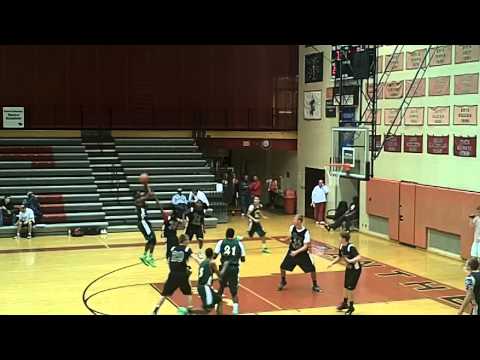 On Monday, Michigan extended an offer to 2015 guard Jalen Coleman. Coleman, an Indianapolis native, is receiving interest from all over the country and has played well this summer. The 6-foot-3 rising junior has had a big spring playing for Indiana Elite, after playing with the Spiece Indy Heat last year, and is widely regarded as the top class of 2015 prospect in Indiana. He’ll also be switching high schools this fall, transferring from Cathedral Prep to La Lumiere. We caught up with Coleman on Wednesday evening to discuss Michigan’s offer, his namesake, and much more.

How was Adidas Nations last weekend in Las Vegas?

What are some of the schools who have called you since June 15th?

Can you explain the process of Michigan calling you and officially extending an offer?

“Coach Beilein called me personally. He had talked (to my dad) the previous day, before, Sunday. They (the whole coaching staff) had sat down at a table and had my dad on speaker. Basically, the whole coaching staff was together. They offered me a scholarship like that and kind of told my dad. But they wanted to finalize it by me talking to them. Coach Beilein called me himself, which I thought was very professional of him. And that made the experience even better, hearing from the coach. He called me himself and let me know. I really enjoyed it. He said he was excited, and so was I. So I’m looking forward to going down there with my family.”

How did it feel to get that offer from Michigan?

“I was ecstatic. I was real excited. I didn’t really have too much to say but just be thankful. I was thankful and happy, especially after talking to coach Beilein himself — the head coach. Him saying that he was excited to offer me, I was very thankful. It was more motivation for me in the future, knowing that coach Beilein himself looks at me as a player and that he thinks I can help Michigan be successful in the future.”

Do you have a timeline for when you’d like to commit?

Who’s offered you so far?

“A good coach, first and foremost. A good program as far as history. Or, just coaching history, because I can’t really speak for a coach who just got a new job somewhere else. Looking at how they’ve done in their past and how they’ve improved players. Also, the school’s alumni — even if you go to the next level, if you go to the NBA or for players who don’t go to the NBA, what can they do for them? Students from that school, how do you still hook up with them and be successful? Not only in basketball, but off the court, in your life. A coaching staff who’s there for you even after the basketball years and a family type atmosphere.”

Are there schools showing interest who haven’t offered you?

“Michigan State. They say whenever I’m capable of coming down there with my family, they’ll offer, but they want to make it official with me on campus. I can’t really speak to who might offer me, but as far as interest, I have some from Duke, Florida and UCLA and North Carolina State.”

When are you going to be in Ann Arbor?

“Honestly, I’m still trying to work that out now, with my parents along with the coaching staff.”

Do you think it’ll be before the end of the summer?

“The coaching staff, one. I like the way they improve their players that I’ve watched them — well, throughout the years that they’ve been recruiting me and I’ve been paying attention to how they not only improve their starting five but also their bench players. I feel comfortable going there and knowing I’m going to improve as a player. Obviously, as a Big Ten school, education-wise they have that. I would get a very good education there. (Michigan) does have a lot of things that I would want in a school. I want to figure out more about the school and find out more from going up there. Having the option to go there, I want to know more about the school. Just in case I do want to go there, I would know and be sure.”