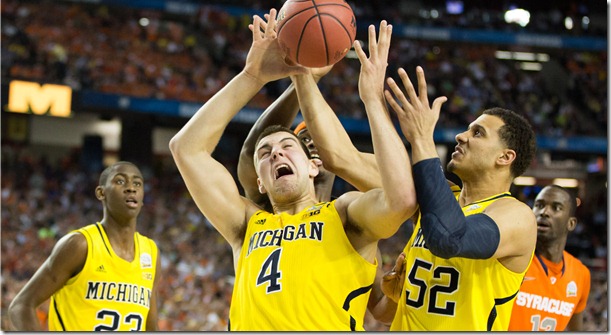 Last season, as Mitch McGary developed into a solid option at center, John Beilein found himself with some newfound flexibility.

For a long time, Michigan had so few serviceable bigs that the 6-foot-4 Zack Novak four years as a power forward. Even last season, Glenn Robinson III was Michigan’s preferred power forward option at just 6-foot-6, decidedly out of position.

But with McGary at the five and the possibility of Jordan Morgan playing the four, Beilein could either play big or small, instead of play small out of necessity. Alas, the experiment was mostly cut short with Morgan’s ankle injury against Illinois.

This season brings the possibility of continuing the two-big experiment. Michigan would like to play Robinson at the three position — it’s where he’s most comfortable and probably where he can be most productive. While that would necessitate playing two big men, Beilein said on Thursday that he plans on maintaining flexibility with the lineup — in fact any given lineup depends in a large part upon the strengths and weaknesses of the opposing team.

“I think it’ll be as flexible as we’ve always been and play what’s best,” Beilein said. “I said on the radio this morning: we played 28 teams last year, and 18 of them played small. 18 of them, and these are approximate numbers, had a stretch four that you have to chase around the perimeter, whether it’s Adreian Payne or the young man from South Dakota State. VCU had a stretch four.”

Stretch fours are matchup problems, generally. Michigan found itself without a stretch four in the true sense — Robinson could hit from long range and make plays from the perimeter, but his lack of size was a detriment.

Mitch McGary’s skill set, and hopeful development this summer, could lead to him seeing minutes at the four.

“Glenn was sort of (a stretch four), he could shoot from outside,” Beilein said. “I think Mitch is working really hard at being able to shoot from distance.”

Beilein was quick to point out that there is a lot of coaching that goes into the decision to play big or small. Many factors contribute to the decision, and there’s no sure-fire way to always know the right move. It depends on how the opposing team is playing you and the skill development of your own players.

The recently-concluded NBA Finals served as an excellent example of the pros and cons of playing big or small.

“If you watch the NBA Championship, that’s probably the biggest chess match going on right now — how big one team is playing over another,” Beilein said. “You don’t go into a season saying we’re going to play big, we’re going to play small. You have to wait and see what people can do. We have freshmen. What can they handle? How can the coaches tweak it to their strength?”

One thing’s for sure: Beilein is not nearly as concerned about the decision to play big as Michigan’s fan base appears to be.

“It seems to be a lot of concern for everybody, it’s not really a concern for us. How can we develop our players so that number one we can win, and number two for professional play. Because that’s obviously a huge recruiting draw for us.”

Michigan may play big, and it may play small. What’s so different about the upcoming season is that they will likely have the option to do either. Much of that possibility depends on McGary’s development this summer — if he enters the season with a consistent midrange shot and improved decision-making, it could free up Robinson to play his desired position.

“Hopefully this is as flexible as we’re going to be, because of what Glenn’s been able to accomplish and his growth,” Beilein said. “We recruited Glenn to play the three position. We’ll see how people play us and we’ll see how everybody develops over the summer. It’s not about the number — it’s where you’re development is and how we can assist in that.”