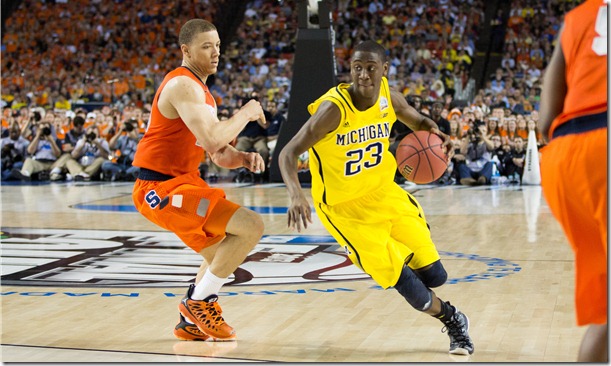 While the hype surrounding this season’s crop of Michigan basketball freshmen isn’t anywhere nearly as intense as it was last offseason, the unknown is always intriguing and there’s quite a bit riding on the new underclassmen. Two of Michigan’s three incoming freshmen could start next season and all three could find themselves in the rotation.

No matter what the freshmen do, John Beilein will likely spend the early portion of the season drawing from his stable of young but relatively experienced players — playing under the bright lights of the Final Four will cause any player to grow up fast.

During a casual discussion with media on Thursday, Beilein addressed his expectations for a few returning Wolverines, all players who will have a significant impact on Michigan’s on-court success next year. However, success on the court relies heavily on one role the team must find a way to fill this offseason: leadership.

Trey Burke was just a sophomore last season, but he was the undeniable heartbeat of the Wolverines. Tim Hardaway Jr. was a senior citizen on the eighth-youngest team in the NCAA last year, and his leadership shone through in his tireless work ethic. With both of them gone, along with the five senior bench players who were so integral behind the scenes to last season’s success, where will Michigan turn to fill the leadership void?

On Thursday, Beilein said he will turn to Jordan Morgan. Not only does Morgan provide critical experience at both the four and five positions, he was around before Michigan became a destination for top-level recruits.

“That (leadership) is a role I really want (Morgan) to embrace, and he and I have talked about this a few times already,” Beilein said. “Some of the plays that he made in the NCAA tournament and down the stretch for us were big plays. They weren’t necessarily the big numbers he’d had before, but he’s been through a lot, watching our renaissance here. So he knows better than anyone what this teamwork can accomplish. They have to look at him and see this teamwork every day. I think he understands that role.”

Beilein also mentioned the possibility of Mitch McGary stepping up and taking on a leadership role, but when asked about possibly addressing the assigning of team captains, the coach said it’s still too early to make any decisions.

“It’s too early (to talk about captains),” Beilein said. “The leadership, we’re going to do what we did last year. We’re going to wait, and we’ll wait and see who is ascending to that role.”

Beyond leadership, Beilein is looking for players whose roles were marginal last season to step into bigger shoes and contribute in more ways. One player whose offseason exploits have been exceedingly well-documented is Caris LeVert. The hype — stoked by Hardaway — has been such that Beilein felt the need to quash it.

Beilein said he would like the rising sophomore to embrace a sort of utility role next season and look to use his diverse skill set to help the team wherever it needs him.

“Earlier reports are a little bit exaggerated; he’s not 6-foot-10 right now,” Beilein joked. “He did look a little taller yesterday, though. I will admit that. He’s really working hard. He’s a great kid. He and Nik really spend a lot of time in the gym on their own. I don’t know where his role will be.

“I think Caris, he showed he can rebound if he has to play forward, he showed he can handle if he had to be a primary ballh andler at times, he showed in the Syracuse game that he can hit huge shots from distance. Bt the thing he does as good as anybody we got is guard people. His in-between game is something we wanted him to work on as well, and he seems to be doing well in the workouts that we’ve had. Because he can defend, he’s got a great chance to sort of filling in things.”

As another rising sophomore looking to take on an expanded role next year, Nik Stauskas will have to be even less “just a shooter” than he was last season. Beilein would like to see the Canuck quicken his release as well as improve his shot fake and driving ability.

In order to learn how to speed up his shooting motion, Beilein said Stauskas should be sure to watch plenty of Miami Heat games. It’s an order Stauskas — a notorious Heat fan — should have no trouble complying with.

“I think one of the biggest things with Nik is — he can really shoot, I think everybody figured that out, so I want him watching Ray Allen — he’s a big Heat fan — I want him watching Ray Allen a lot,” Beilein said. “He has a really quick release, you have to be right on his toes to get there. Nik’s really working hard on that, as well as being able to shot-fake and get in the lane and make plays, which I think he can.”