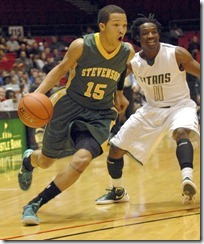 Jalen Brunson, the top point guard prospect in the class of 2015, has emerged as one of the top priorities for the Michigan coaching staff, receiving an offer on Saturday during an unofficial visit to Ann Arbor. The Illinois native is receiving attention from all over, including UConn, Illinois, Ohio State and others, and was at Michigan State’s team camp over the weekend as well. We caught up with Brunson to discuss his most recent offer, how he compares with Trey Burke and much more.

Take me through the visit on Saturday. What did you do?

“We toured campus. We saw all the academic buildings, we saw the dorms. I liked seeing the Big House. My cousin, he’s a big football addict, so seeing that with him was pretty special, and also seeing the Crisler Center. And we also saw the renovations and the practice facility, those are new. The campus is pretty beautiful.”

What did you think of the facilities?

“They were pretty nice. They’re state-of-the-art. They really caught my eye, I really liked them.”

What was the conversation with the coaching staff like?

“He just said how he’s really been watching me. He really had a good taste for me and the way that I played. He said he saw the same thing in Trey Burke in a lot of the things I did. That was a really nice compliment. He said, ‘My staff, we really believe you would be a great fit for Michigan.’ So they offered me a scholarship.”

Who was present for that conversation?

“The whole staff was involved with it, and so was my dad and my cousin.”

How did it feel to get the offer?

“I feel honored just to be mentioned with the people who have gone to Michigan. It’s just a really big honor. Just knowing that one of the top schools in the country offered me, that’s pretty special.”

Do you have a timeframe for when you would like to commit to a school?

“Like, a month before my senior season starts, just to commit then.”

Which schools have offered you to this point?

What excited you about the point guard position at Michigan, watching Trey Burke last season?

“He gives his point guard a lot of freedom, and I like that. He said, ‘We’re going to surround you with shooters,’ and I saw how Trey got, you know, when people collapsed on him he could kick out to Nik Stauskas or Tim Hardaway Jr. and all the shooters that they have.”

You also visited Michigan State this weekend for team camp?

“Yeah, I was there. I was there for team camp. I talked to coach Izzo for a little bit, but it wasn’t really a visit. I saw the facilities around the basketball building, but I didn’t see any of the academic stuff.”

How did team camp go?

“It went pretty well. I nicked my hip, my IT band, but I was back on the court today, so it wasn’t a big deal.”

Which schools are recruiting you the hardest right now?

“Most recently, probably Michigan, Virginia and Illinois. The schools who have most recently offered me would be recruiting me the hardest.”

Are there other schools who haven’t offered but are still showing interest?

“I would say there’s a lot of interest from Michigan State, they haven’t offered. I’m waiting for an offer from whoever thinks I fit in their system. Just waiting to hear if I’m a good fit for the point guard position. Talking about Ohio State, they’ve been recruiting me pretty hard. I’ve been talking to coach Paulus, just pretty much waiting.”

“When I visited, their hospitality. Also, they were coming in with the new freshmen so I got to meet them and see who they were. I didn’t get to spend a lot of time with the players, I really wish I could have done that. What I really liked was how coach Beilein told me how he wanted to keep a good relationship, have good chemistry on the court. So the relationship was key. That’s what I really enjoyed about it.”