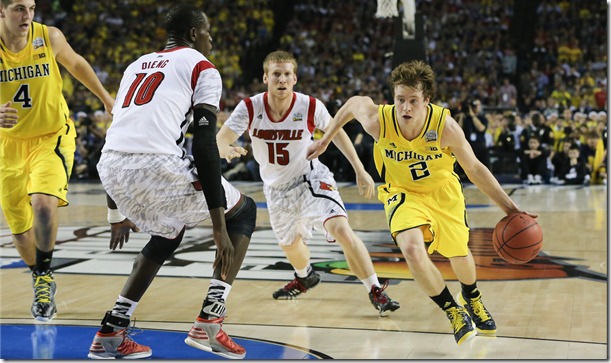 Michigan’s NCAA tournament run that took it all the way to the national title game was obviously a huge positive for the program. It was terrific exposure and it legitimized Michigan, after a prolonged absence, as a member of college basketball’s elite once again.

It also allowed high school basketball players to observe Michigan’s style of play — the smooth, fast-paced offense, the relative freedom coaches allowed for the players on the court and the hypersonic development of players like Mitch McGary throughout the postseason made an impression on up-and-coming players. Some of those players are now getting recruited by Michigan — and some are contacting Michigan themselves.

“I think we’ve gotten cold calls because people like the way we play,” Beilein said during an informal conversation with media on Thursday. “And we follow up. You never know where it’s going to go.”

As far as the effect the run has had on recruiting, Beilein concurred that he has seen a difference in the level of recruits Michigan is going after — but it’s not as though the recruits who committed before last season are slouches, either.

“There’s been a lot of phone interaction, and I know it’s positive. We’ve been very successful,” Beilein said. “If you look at the guys in this recruiting class coming in, with Derrick (Walton) and Zak (Irvin) and Mark (Donnal), I really believe that’s a great recruiting class, and that was done with none of this. We still have to be who we are, but we still get to reach out to a lot of really good prospects because of our run.”

While the Wolverines are looking to stock up on even more talent coming off their long postseason run, Michigan is already relatively stacked with big-time players. Like Beilein said, he has a great recruiting class coming in and at least two NBA-ready players in McGary and Glenn Robinson III.

This is sure to mean intense competition for playing time. With 11 scholarship players, Beilein said any one of them could crack an 8-or-9-man rotation.

“You look at a team and you’d say, ‘Okay, he’s probably not ready,’ but I think all 11 (scholarship players) have a chance to get in there,” Beilein said. “Usually it’s like 8 who get a chance to start, but I think all 11 have a good chance of being in an 8 or 9 man rotation. And that could fluctuate all year long.”

Beilein will continue to evaluate the incoming freshmen based on their readiness and returning players based on their progress. The competition last season in practices was widely recognized by the coaches as unparalleled during Beilein’s tenure at Michigan. But with the emergence of players like Spike Albrecht and Caris LeVert — two players who didn’t figure to make a huge impact last season but ended up being legitimate contributors — all the Wolverines will be engaged in intense battles for playing time that will likely last most of the season.

With a possible lineup of Albrecht, Nik Stauskas, Robinson, McGary and Jordan Morgan, Michigan’s coaching staff doesn’t have to start freshmen immediately. But is it a possibility? Beilein says yes, and he hopes his players realize it.

“They better realize there’s competition out there. You’ve got to earn everything, like at most college programs,” Beilein said. “We need to earn everything. They know that going in there, and they need to continue to do things in a way that’s made us successful, and I know they’re looking forward to the summer time. Getting six more hours of academic work done, but also be with each other. And the freshmen really have a busy summer. I’m looking forward to another bonding experience for them together.”

Notes: Beilein will be joining Trey Burke at the NBA Draft, flying to New York City the night of and then flying back to Colorado to re-join Team USA. … Beilein said he sees no correlation between a player playing internationally in the offseason and experiencing a lack of legs at season’s end, but Michigan won’t have to worry about that this season, as both Mitch McGary and Glenn Robinson III opted to stay in the country and attend Nike showcase camps despite being invited to try out for national teams. Coaches have been talking to Beilein on the AAU circuit about Michigan’s NCAA tournament run. “All the fellow coaches I’ve corresponded with for years and years and years, it is neat to hear them talk about how much they enjoyed our team’s run and the guys who have been there before.”