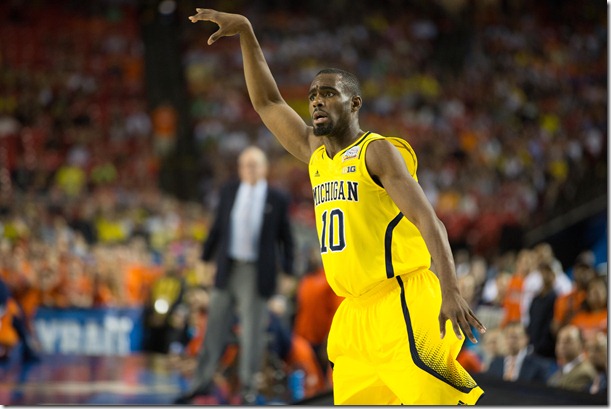 After two months of preparation, combines, flights, workouts and interviews, the 2013 NBA Draft is finally just days away. As Thursday night approaches, it becomes increasingly clear that it should be a very special night for not only Trey Burke and Tim Hardaway Jr. but also Michigan head coach John Beilein. Beilein, who is expected to attend the draft with Trey Burke, has never had a player selected in the first round and could have two on Thursday night.

Trey Burke’s stock continues to hover in the six or seven range with most national prognosticators having him slotted to New Orleans, Sacramento or Detroit. However, Tim Hardaway Jr. – who was projected as a second rounder when he declared for the draft – appears to be solidly into the first round. Almost every major national writer now has Hardaway somewhere in the top 30.

Seth Davis quoted anonymous NBA scouts on most notable draft prospects and hit on both Burke and Hardaway.

“I like Burke because he’s a winner, he’s tough, and he can score. He’s got some D.J. Augustin in him. He loves to prove people wrong. We like our guards big, but look at guys like Chris Paul and Tony Parker. I think Burke is a solid point guard but I don’t see the all-star level.”

The big guard knock is never going to change but it seems pretty safe that someone will take a chance on Burke given his natural abilities.

The reviews on Hardaway were also fairly positive.

“He has shown improvement because he’s an extremely hard worker. Defensively he’s just average. He needs to become a better shooter, especially off the dribble. He’s a better athlete than Bullock. If I’m picking late teens or early 20s and he’s available, I would take him. His problem is the position he plays at the next level is really hard.”

ESPN conducted a similar feature, ranking prospects in their “Secret NBA Draft Big Board”, a rating system based on “rankings from our most informed sources in the league”. Burke only checks in at No. 9 on the ESPN feature, below his typical mock draft selection. Chad Ford explains:

This vote shows the split in NBA circles on Burke. While some believe he’ll be a star, others think he’s going to be just an average player at the next level. Burke has moved off his status as the consensus No. 1 point guard in the draft and is now an eye-of-the-beholder type of player. Burke’s range on draft night appears to be 6 to 14.

Ford sees a high ceiling for Hardaway’s draft potential saying that some could even have him rated in the lottery.

Hardaway Jr. has been helping himself in workouts, but it doesn’t seem to be enough to move him out of the 20s. His draft night range is 7 to 27.

Ford’s latest mock draft also has Burke back to to No. 6 – he had previously slipped to Detroit at No. 8 – with the caveat that he’s New Orleans’ plan B if Len and Porter are off the board.

Here’s where things really get tricky. If Porter or Len still are here at No. 6, I believe the Pelicans will draft either one of them. If both players are off the board, the team has to move onto Plan B. While Bennett might be tempting, the Pelicans do need depth at the point guard position and will struggle to let Burke slide. Michael Carter-Williams also could be in the mix here.

Hardaway has crept up to No. 25 on Ford’s board. Find a full run down of updated mock drafts below.

Hardaway is slowly creeping up several teams’ draft boards, as executives who have spoken to him have come away impressed. He is a very good shooter — a skill the Spurs covet — who can score in transition. He needs to work on his ball handling and defense, but San Antonio has enough depth that it can be patient with Hardaway over the next few seasons.

Draft Express goes Synergy on the draft crop, examining the top point guards and top shooting guards. It shouldn’t be any surprise to someone who reads this site that Burke’s statistical profile is sterling.

Trey Burke is widely considered the top point guard available in the 2013 draft and nothing we found in studying his situational stats would lead us to believe otherwise. He does not stand out in a major way on paper, but ranks well across the board and excels in a few key areas that should aid him in his transition to the next level.

Perhaps more so than any position in the NBA, point guards are defined by their ability to excel in one particular situation: the pick and roll. While Trey Burke ranks well in both the number of possessions he used dribble off of ball screens and the rate at which he turned them into points, what is truly remarkable about his numbers in the two-man game is the degree to which he valued the ball. Turning it over on just 8.2% of his pick and roll possessions, Burke’s command of the ball makes him the only player with a single-digit turnover percentage.

The DX conclusion on Hardaway is a bit more interesting although I’m surprised to see no mention of his transition ability.

We went into detail on Tim Hardaway Jr.‘s merits on the offensive end in our scouting report on him just a few weeks ago. Reiterating the key point of that report, at different points in his career, the 3-year starter has been prolific in a variety of different areas, but rarely ever at the same time. This season, he knocked down a fifth-ranked 39.6% of his catch and shoot jump shots while making just 30.6% of his pull-ups. Last season he made 28.4% of his catch and shoot jumpers and 44.6% of his pull-ups. A smooth, intelligent scorer, Hardaway can score in a variety of ways when he puts everything together, but he’ll have to become more consistent to give his coaching staff a better idea of what they can expect from him on a nightly basis.

One from the archives, Trey Burke hits seven threes and scores 35 points against St. Edward in high school.