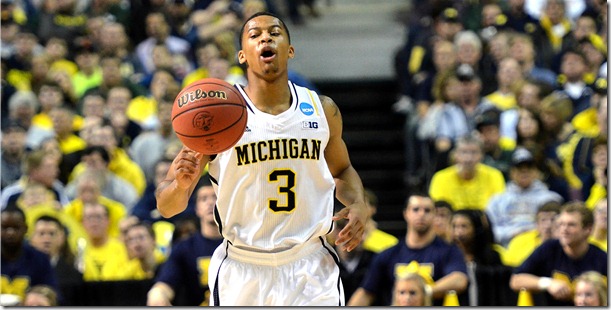 Trey Burke was the best college basketball player in the country this season. Pretty much everyone agreed. The grade that he’s concerned about – where he lands in the NBA Draft – will come Thursday night but the 6-foot Columbus native cemented his legacy as one of the best players to ever play for Michigan.

Burke’s talent was obvious as a freshman but his sophomore season seemed to be a continuous Trey Burke highlight reel. Burke was remarkably consistent through the non-conference slate, the Big Ten season and the NCAA tournament while leading Michigan to the national championship game.

It’s impossible to talk about Burke’s season without sounding hyperbolic, but in his case it’s all justified. Burke was Michigan’s coach on the floor all season long, running John Beilein’s pick-and-roll action about as well as it can be run. Burke was superb at controlling everything that occurred on the offensive side of the floor and had a knack for making his decisions at just the right time — whether it was pulling up for a shot, driving to the basket, dumping the ball to one of Michigan’s bigs underneath or kicking to an open shooter.

There was exactly one time — Michigan’s first Big Ten road game of the season against Ohio State — that I can remember Burke even remotely flustered. He was the emotional core of his team and exemplified what it means to be a leader as a point guard. As this past season progressed, it became increasingly evident that Michigan would go as far as Burke would take them. He took them all the way to the final Monday, finishing out his Michigan career leading his team to the best Michigan basketball season in over two decades.

Trey Burke was the consensus best player in college basketball and led Michigan to its best season in two decades. He will go down in Michigan history as the best point guard the program has ever seen and it’s only a matter of time before his #3 jersey hangs from the Crisler Center rafters.

Bottom Line: When Michigan began recruiting Trey Burke, he wasn’t wanted by his home state school and he had previously committed to Penn State only because he thought it was the best offer he was going to get. He grabbed Michigan’s starting point guard spot definitively as a freshman and never let go even a little bit. Now, Burke is a lottery pick and is projected to be selected in the top ten picks of this year’s NBA draft. What a delight it’s been to watch the development of such a transcendent college superstar.

The impact Trey Burke had on Michigan’s basketball program can’t really be measured, but it’s big. I can tell you this because I hear it over and over again: because of Burke, high school kids see Michigan as a “point guard’s dream” — Burke, with some help from Darius Morris, has made Michigan a positive destination for some of the nation’s top playmaking talent. As far as an image for the program, Burke put a face on Michigan’s success, a face that was nearly flawless; Burke went about his business the right way, said all the right things without being a bore and backed up all the hype surrounding him night in and night out on the court with remarkable consistency. A basketball coaching staff, let alone a fan base, can’t ask for anything more from its best player. Burke’s career at Michigan may have been short, but it was legendary, and its memory will always be cherished for Michigan fans. It was a true pleasure to watch Trey Burke don the Maize and Blue.