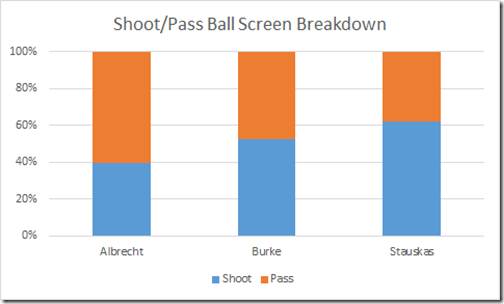 Trey Burke will walk across the stage on Thursday and hold up an NBA jersey, officially beginning the next phase of his career. He’ll be remembered as one of very best point guards players to don a Michigan jersey.

There’s plenty to remember about Burke – the steal, the block that wasn’t, the shot – but above all else, he was arguably the most effective ball screen player in the last five years of college basketball. Burke’s combination efficiency and high usage in ball screen situations was off the charts in the Synergy Sports era. We pulled the the Synergy Sports statistics for every player to use at least 300 possessions of ball screens in a season and tried to figure out where Burke ranked.

Narrowing the sample size to major-conference players makes Burke’s domination all the more impressive. It also illuminates his freshman to sophomore improvement, both of his seasons are marked in blue below.

The numbers don’t lie. Of the 22 high usage ball screen players in the last five years, only Burke and Larkin surpassed a point per possession despite all using fewer possessions.

Thursday marks the day when it’s officially time to stop admiring Burke’s dominance of the college game and start wondering what Michigan’s offense will look like without him. One thing is clear, the pick and roll will continue to be an integral part of Michigan’s offense.

When John Beilein took over in Ann Arbor, the ball screen was barely an afterthought. John Beilein’s (sometimes maligned) offense was heavy on three point shooting, spacing, back cuts, passing and slashing from the wings – not the high pick and roll. The Wolverines ran ball screens on just 6.8% of their offensive possessions in John Beilein’s first season in charge. During his second year, that number fell to just 4.4%. Last year, almost one in every four Michigan possessions hinged on the ball screen.

The Wolverine roster was very different back then but the transition has been dramatic. Michigan’s transformation into a ball screen offense has been particularly remarkable because the Wolverines continue to become more efficient as they use more ball screens. Conventional wisdom would hint that efficiency would decrease as usage increases. In each of the last three seasons, Michigan has been one of the top-25 ball screen offenses in the country.

One of the largest questions facing next season’s Michigan team is how the pick and roll will be involved in the Wolverine offense. Will a quarter of Michigan’s possessions still be used by the pick and roll? If so, who will be running them?

Michigan loses Burke and Hardaway, who provided Michigan with roughly 16 points per game of ball screen offense last year. However, there are two intriguing returning options plus a blue chip point guard to add to the mix.

Nik Stauskas was able to produce off of the ball screen efficiently all season, mostly because of his devastating three point stroke. Spike Albrecht played limited minutes last year but he was also a productive ball screen player. It doesn’t take much to figure out that Albrecht’s approach to the ball screen is radically different than Stauskas and Burke. Albrecht is strictly a setup man in the pick and roll as over 60% of his ball screen possessions were passes.

The following charts show the shoot vs. pass breakdown of Albrecht, Stauskas and Burke’s ball screen tendencies and efficiency.

Stauskas, like Burke, is most comfortable creating his own offense but competent in distributing the ball. Albrecht shows a dramatic difference. He’s the best setup man of the bunch but struggles to finish in the lane. Both Albrecht and Stauskas show less balance than Burke in terms of shot vs. pass distribution.

Nik Stauskas (along with Zak Irvin and Caris LeVert) are likely to run their fair share of ball screens from the wing. Glenn Robinson III could get in on the action as well, but these numbers show how absent that element was in his game last year. Mitch McGary generated as many ball screen points as Robinson (and not as the roll man) last season.

However, no team is labeled as a ball screen offense without a point guard that thrives in that element. The pick and roll has become engrained in Michigan’s offensive culture and the onus will fall on Derrick Walton to continue that trend. John Beilein continues to tell reporters “not to count out Albrecht” but it’s obvious that Walton will play a major role.

Walton isn’t Trey Burke, he isn’t Darius Morris or Spike Albrecht. He’s Derrick Walton. Walton is a smaller guard and more of a true point guard in the sense that he looks to pass first but can score.

From a pick-and-roll standpoint, the three questions Walton has to answer are: Can he pass over the hedge? Can he finish at the rim? Can he knock down the open three? I’m most worried about No. 2. He’s been putting in work on his shot and has the quickness to make up for his size, finishing in the paint will be a learning process.

The offense will be different next year. The ball screen offense will be handled by committee rather than squarely on the back of one man. Michigan will also look to get Glenn Robinson III more involved in the offense and it’s no guarantee (or even likely?) that he’ll be most effective in that situation. But after three successful years one thing is clear: the ball screen is here to stay. It’s a thriving part of the modern day NBA and it has suddenly become the most appealing element of Michigan’s offense on the recruiting circuit.