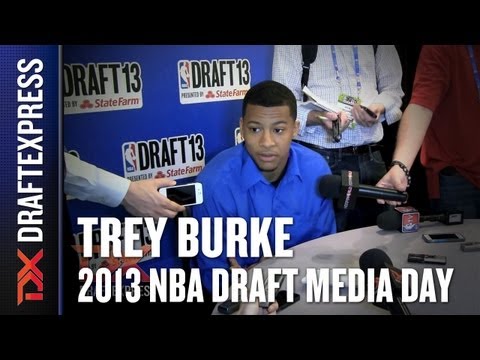 It’s draft day for Trey Burke and Tim Hardaway Jr. The duo will learn their professional destinations tonight and officially begin their careers at the next level. John Beilein plans to be in attendance with Trey Burke in the green room at the Barclays Center while Tim Hardaway Jr. will wait to hear word over the phone.

Burke has the potential to be Michigan’s highest draft pick since Jamal Crawford (8th in 2000) while Hardaway also looks likely to be selected in the first round. However, there are whispers that Burke could slip in the draft. Chad Ford dropped him to No. 12 in his mock draft this morning and back to Portland at No. 10 in an afternoon update. Could Michael Carter-Williams and CJ McCollum leapfrog Burke? It seems unlikely but you never know on draft night.

The most successful people tend to have an exceptional trait. Burke’s determination and mental toughness rival Paul’s. He considered leaving for the NBA after his freshman year, and I thought he was making a mistake. He seemed, to me, to be a backup point guard in the NBA, and a likely second-round pick. But he went back to school and got stronger and much faster — so much faster that in the first few games of his sophomore season, he was still adjusting to his improved athleticism. He got better in almost every aspect of the game.

Burke is ready for the NBA now. And if he tries 100 ways to become an NBA star, and he fails at all 100, he will go searching for No. 101. Burke is not the best athlete or biggest guy in this draft. But don’t be surprised if he turns out to be the best player.

Wojnowski in the Detroit News writes that Burke is the leader the Pistons need:

The Pistons desperately need an on-court leader, and that’s what this offseason is about. That’s what tonight’s wildly unpredictable draft should be about. And that’s why, if he gets the chance, Dumars must draft a point guard, because in the NBA, you can’t ever stop looking for one.

Jeff Goodman writes that Mitch McGary and Glenn Robinson III could have made the biggest mistake by returning to school. At the very least, they have taken a big risk.

Multiple NBA guys said that the three guys who made a mistake by not leaving early were Oklahoma State’s Marcus Smart and the Michigan duo of Mitch McGary and Glenn Robinson III. “Smart would have gone top-five this year for sure,” one NBA exec said. “Who knows where he’ll go next year, but there’s a good chance he won’t go that high.” As for both Robinson and McGary, there is a concern that both will struggle without a high-level point guard such as Trey Burke. “They both would have been top-20 picks, maybe even top 12,” one NBA personnel guy said. “They may struggle this year and see their stock fall.”

Chris Mannix asks the burning question: Who will be the first point guard off the board?

There continues to be a divide among GM’s over which point guard has the most potential. Trey Burke is the safer pick. The reigning National Player of the Year is a proven scorer and playmaker who led Michigan deep into the NCAA tournament, playing well against top competition. There is also a sense that Burke, who plays well in the pick-and-roll, will be able to make a more immediate impact. The Magic will give Burke a look at No. 2 and rival executives believe the Pelicans are very high on Burke at No. 6.

But Michael Carter-Williams continues to be a tantalizing talent. His length (6-6) is the obvious appeal, but team executives believe he is the more natural playmaker and that his skills will evolve outside of Syracuse’s system. Carter-Williams is more of a project — his jump shot is subpar and his high dribble will need work — but these are problems executives believe can be corrected with some work. It doesn’t seem likely Carter-Williams will go higher than No. 7, to Sacramento, but Charlotte (No. 4) is a wild card. The Bobcats could surprise people with that pick.

Sheridan Hoops notes that the Clippers are very high on Hardaway:

The Clippers, according to a source, are very high on Hardaway Jr. and feel his ability to shoot would be a perfect compliment to Chris Paul, Blake Griffin, and company. With Doc Rivers now on board, The Clippers seem safe in assuming Chris Paul will re-sign.

Chad Ford’s “final big board” slots Burke 8th and Hardaway 28th along with projected draft ranges for both prospects.

Burke was the college basketball player of the year and might be, along with Porter, the best player in the draft. He does just about everything well on the basketball court and plays with a moxie that coaches love in their point guards. If he were a little taller or a little quicker he’d be a lot higher.

Hardaway has been climbing draft boards the past few months thanks to stellar workouts and a reminder that he’s one of the more polished players in the draft with good shooting ability, size and athleticism. It’s his lack of upside that appears to be affecting his draft stock.

Jalen Rose and Juwan Howard have both served as mentors for Trey Burke during the draft process.

“I got the opportunity to talk with Juwan Howard,” Burke said in New York on Wednesday on the even of the 2013 NBA draft. “He told me I had a great year in college, and now it’s time to make that next step (and act like a professional).

“He’s told me to stay humble, and stay in the gym. He told me those are the two most important keys (when you’re a rookie). Keep that work ethic and stay grounded.”

My fav moment while playing for @umichbball was coming to Crisler Center every game day because no matter what, our fans had our back.

Trey Burke says he had a lot of 1 on 1 shooting contests with @NStauskas11 "It never went good my way."

"@nickbaumgardner: Trey Burke says he had a lot of 1 on 1 shooting contests with @NStauskas11 "It never went good my way."" Gotta love him!