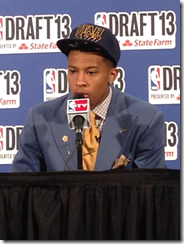 Trey Burke was selected by the Minnesota Timberwolves and promptly traded to the Utah Jazz. He addressed the media late on Thursday evening once the trade had been finalized. Read a full transcript of Burke’s comments from the Barclays Center below.

TREY BURKE:  It was a long process.  I’m happy it’s over with.  I’m happy I know where I’m going to end up.  I want to thank the Miller family, Coach Corbin and the Utah Jazz staff for giving me this opportunity.  I’m really excited.

Q.  Can you tell about the journey, your time getting here, the commercials, the movie ad, the television shows and step by step through the process, today, being with a team, getting up, excited, being traded whatever goes through that part and what’s going through your mind.
TREY BURKE:  You just named a lot.  I want to say it’s been a long process.  Ever since we’ve lost the national championship these last two months or so, it’s just been a whirlwind.  Like you said today, I got drafted by the Timberwolves and then I found out I was getting traded to the Utah Jazz.  My mind was pretty much everywhere.  I was just ready to figure out where I was going to finally end up.   Now that I’m at Utah, I’m definitely thrilled for the opportunity.

Q.  Trey, were you bummed at all that you slipped past Detroit?  And obviously what was the emotional roller coaster you went through in that maybe 20 minutes from knowing no Detroit, then Minnesota and then Utah?
TREY BURKE:  I think the only reason why I kind of got a little nervous after Detroit is because I didn’t really work out for any teams after that.  I didn’t know how far I was going to slip back into the draft.
So I was just waiting for someone to call my name.  Like I said, the Timberwolves called me, and I got traded five minutes later.  I don’t know what to really think right now.  I’m happy to be at Utah.  I’m just ready to get my career started.

RELATED: Tim Hardaway Jr. reacts to being drafted by the New York Knicks

Q.  Trey, we’ve talked a couple of times about you needing to land in a situation to be the leader.  You’ve got a young guy in Derrick Favors and Enes Kanter, Alec Burks.  You have all the tools.  Are you the guys who is going to bring the playoffs to the Utah Jazz?
TREY BURKE:  I think I’m definitely capable.  I just needed the opportunity.  Utah, the Miller family and Coach gave me an opportunity to try to help this team win.  I’m looking forward to it.

Q.  Trey, as you probably know, the Jazz have a strong history with Rickey Green, John Stockton, Deron Williams.  They bring their own style to the game.  What are you going to bring to Utah we haven’t seen before?
TREY BURKE:  I’m sure you’ve seen it with John Stockton and guys like like Deron Williams.  I think the winning mentality and the guy that’s going to work hard and make plays for this team.  This is a new journey for me, but I’m looking forward to making an impact right away and helping this team go far.

Q.  Trey, talk about coming from the University of Michigan.  There’s NBA talent galore that were your teammates.  Talk about how the competition and practices and just the motivation of you guys really pushed you to be where you’re at.
TREY BURKE:  The competition was at an all‑time high level at Michigan.  I think that’s what made us really good.  We competed against each other each day in practice.  And we pushed each other to get the potential out of each other.
I think that helped us all get better.  I’m glad to say that I’ve came from a university like Michigan.

Q.  How great is it for you and Tim to be both drafted in the first round?
TREY BURKE:  It’s great.  It’s an honor and an accomplishment that we’ve been waiting for our whole life.  And it’s an opportunity that we’ve always wanted.  So I wish him the best.  I know he’ll do great.

Q.  Trey, you had eight teams pass on you.  One team trade you.  You were lower than you thought.  Is that fuel for the fire at this point?
TREY BURKE:  I’m happy where I’m at.  It’s a blessing to be in Utah and playing for the Jazz.  I think the type of player that I am, I definitely get motivated by things like that.  Teams passing up on me.  Not knowing what to expect at the end of the day.
So I definitely think it will motivate me.  It will make me get in the gym more.  Just get better, continue to work hard.

Q.  Trey, congratulations.  Can you take us through what was going through your head from the moment you were selected until now with the whole trade and who you were talking to?
TREY BURKE:  Well, it was kind of a shocker that the Timberwolves selected me.  So I was kind of thrown off a little bit.  I was happy at the same time.  I was excited.  I got to walk across the stage that I’ve been watching since I was a little kid.  Once I found out I was getting traded, it was kind of like, what do I do?  I had the hat on and everything.  So I didn’t really know what to do.  They told me to sit in the back room until it was confirmed.  Now that it’s confirmed, I’m happy to be in Utah.

Q.  Trey, I want to ask you about your teammate Tim who got drafted by the Knicks a little while ago.  Fluid situation with the Knicks with J.R. Smith telling the team he’s going to opt it and test free agency.  There’s an opening for somebody who can score.  How do you think he’s going to fit in New York?
TREY BURKE:  I think he’s going to fit perfectly.  That’s the kind of player he is.  Tim Hardaway is a team player first.  That’s what’s most important, what he brings to teams.  He has that NBA gene in him.  He’s a great high‑volume shooter who can get hot in any second.  And I definitely think the Knicks didn’t go wrong picking him.

Q.  Trey, now that you’ve actually been selected, how excited are you to get back to basketball and how long has it been since you’ve touched a basketball?  Is this like a record length for you?
TREY BURKE:  No, I touched a ball.  I got an opportunity to touch the ball yesterday.

Q.  To actually play basketball?
TREY BURKE:  Yeah.  Two days ago they had me on the playground doing some photos.  It’s great to be able to move past this process and just focus on basketball, get ready for summer camp, for summer league.

Q.  What’s your pin?  What’s on the pin there on your jacket?  On your right side.
TREY BURKE:  No, it’s just a pin that a guy offered me to wear.  It’s a flower.  I had a regular one, but I think it just went with the tie.  So I think it was a good look for me.

Q.  So does the hat.
TREY BURKE:  Absolutely.  Thank you.

Q.  Can you talk about the decision to go with your father as an agent.  How special was that for you and him?
TREY BURKE:  It’s special, because he’s a guy that I trust a lot.  He knows a lot about basketball, and he knows a lot of people.  So I felt like he was the right guy to go with.  And I felt like with the resources that we have around myself, I couldn’t go wrong with going with somebody like my dad.  If he needed any type of knowledge, any type of input, I could use the resources that are surrounded by me.

Q.  When we talked yesterday, you said you thought No. 8 was your floor.  What was it about the Pistons when they passed on you?  When they did, what went through your mind at that moment?
TREY BURKE:  I thought me coming from Michigan and them needing another guard, I thought I could end up going to Detroit.  But once they passed on me, I was kind of like, now I don’t know where I’m going to go.  I hadn’t worked out with any other teams past the No. 8 pick.  Luckily I was the next pick right after that.
So I was just excited.  I was excited to hear my name called.

Q.  Trey, how do you see your game translating to the next level?  And with the pieces around you in Utah, would you prefer to play up‑tempo like a lot of you guys did in college or would you prefer to be more of a half‑court team?
TREY BURKE:  I would prefer to be pretty balanced.  I know I have some really good shooters around me.  I think with the guys that the Jazz already have, we can get up and down the floor as well.  But I think I’m going to be a guy that’s going to bring the winning mentality to the team, that can make plays.  And can get his teammates involved and score when I need to score and hit the open man when I need to hit the open man.  I think it’s a feel for the game that I bring to a team like the Jazz.  And I’m looking forward to helping them win.

Q.  There was a recent report Karl Malone is going to be helping out with the organization this upcoming season.  Talk about what he might bring to the table in terms of teaching and working the pick‑and‑roll with the Jazz.
TREY BURKE:  He can teach me a lot.  Especially reading the bigs, setting the screen, reading a big that’s guarding the screen.  The screener.  Just giving me a lot of input about how to become a really good pro.  Karl Malone is an all‑time great.  I can definitely get a lot of feedback from him.

Q.  Are you going to start a foundation or anything to give back to the communities or anything like that?
TREY BURKE:  Yeah, absolutely.

Q.  Have you thought about it?
TREY BURKE:  Absolutely.  I’m always willing to give back to the communities.  It’s a little early right now.  But I’m definitely willing to go back to my community, be an influence to the kids.  That’s always been a dream of mine.  Definitely.