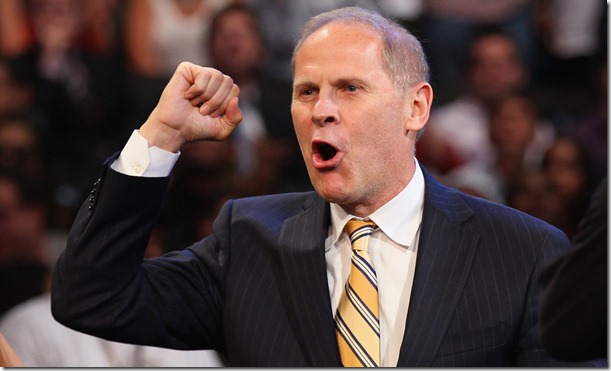 It’s been a long time since Michigan’s basketball program saw two players leave for the NBA and get selected in the first round of the draft. Just shy of 20 years, to be exact. In 1994, Juwan Howard was selected fifth and Jalen Rose picked 13th. Those two players had led the Wolverines to two national title games.

On Thursday, Trey Burke and Tim Hardaway Jr. were both selected in the first round: Burke at number nine by Minnesota (later traded to Utah), Hardaway with the 24th pick by the New York Knicks. They, too, were coming off a season that resulted a lengthy postseason run culminating in a loss in the title game.

Burke was invited to the NBA Draft green room and sat with his family at a table in a maize and blue suit. The popular guard also brought with him upwards of 50 of his friends and family from Columbus, including his good friend and current Celtic Jared Sullinger. John Beilein also made the trip to Brooklyn for the night from Colorado, taking a quick break from his work preparing Team USA for the World University Games. Hardaway watched the proceedings from a restaurant in Miami with plenty of friends and extended family.

Michigan basketball was well represented at the NBA Draft and, with both Wolverines going in the first round, continued to hammer home the upward trajectory of the program. As Hardaway alluded to in his comments after the draft: going with Burke in the first round was special, but what’s special about it is what it says about Michigan.

“It means a lot. It means the world to us. We really wanted this opportunity,” Hardaway said during a conference call shortly after he was drafted. “Coach Beilein and his coaching staff did a great job of preparing us for this moment. We’re just excited, being able to come out here and not just show our talent but show our abilities out there on the court.”

For Burke, the night was tense after the Detroit Pistons passed on him for the eighth pick in favor of Kentavious Caldwell-Pope, a shooting guard out of Georgia. Burke hadn’t worked out for any teams drafting after the Pistons and didn’t know where he would land. Luckily, the tension didn’t last long, as it was soon broken by David Stern announcing Burke’s name with the very next selection, by the Minnesota Timberwolves. Shortly after the selection it was reported that Burke had been traded to the Utah Jazz.

Burke said after the draft that he feels the Jazz bring a good fit.

“I think with the guys that the Jazz already have, we can get up and down the floor as well,” Burke said. “But I think I’m going to be a guy that’s going to bring the winning mentality to the team, that can make plays.”

For Hardaway, the night was significantly less dramatic. The Miami native watched from his hometown, far from the bright lights of Madison Square Garden. And when his name was called at number 24 by the New York Knicks, it was at the higher end of most projections.

With Knicks sharpshooting guard J.R. Smith opting out of his contract this summer, it could open up a spot for Hardaway to find his niche.

John Beilein, who spoke to SNY.tv after Hardaway was selected, sees Hardaway as a hard-nosed, durable player who’s ready for the big stage of Madison Square Garden.

“He started every game he ever played at Michigan. He had no trouble just stepping in as a freshman,” The coach told SNY.tv. “He’s been around the NBA life his whole life. We played and almost every game was a sellout. He’s used to the big stage, he’ll adapt very easily.”

Two players selected in the first round of the NBA Draft, with the head coach looking on; this moment, like many others this season, only serves to solidify the sense that Michigan has made it. The Wolverines are rolling and John Beilein’s reaction from the stands in Brooklyn was telling.

The Michigan head coach looked downright giddy and why shouldn’t he? The Wolverines are winning, recruiting, competing for championships and sending players to the NBA. John Beilein has coached for 35 years but up until this spring he had never coached in a Final Four or coached a first-round draft pick. On Thursday night, he had the chance to watch two.

Burke said the competition he experienced during Michigan practices was at an “all-time high” level. Hardaway said he was proud to make Michigan history. Both will be remembered for helping the Michigan basketball program achieve at a level both its fans and its players can take pride in.

“I’m glad,” Burke said, “to say that I’ve came from a university like Michigan.”