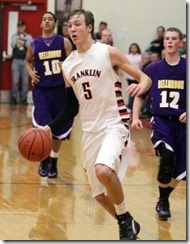 Luke Kennard was in attendance with his Franklin High School team on Friday night as Michigan kicked off the first few games of its team camp at the Player Development Center. All three assistant coaches from Michigan were there to watch, and the 6-foot-5 Ohio native didn’t disappoint.

Franklin only played one game during the short period of camp, but Kennard’s fingerprints were all over it. Manning the point guard spot for long stretches throughout the contest, the talented swingman displayed versatile handle, a smooth jumpshot and tenacity on the boards. Kennard started hot, scoring his team’s first nine points through an array of drives to the basket, pull-up 3-pointers and offensive putbacks.

It looked as though Kennard was trying to make a statement, and at times it appeared he was pressing. He had a few errant passes picked off, and tended to dominate the ball at times.

But overall, it was an impressive performance from one of Michigan’s top priorities in the class of 2015. Kennard was everywhere — he guarded anyone from the opposing team’s point guard to its center, crashed the glass relentlessly, and shot well from deep.

Despite Kennard’s best efforts, it was a close game near the end, with the two teams tied at the final possession. With roughly 20 seconds left on the clock, it was up to Kennard to make something happen. He did. After a devastating crossover at the top of the key that forced the opposing team to help, Kennard found his teammate wide open under the basket for a layup to win the game.

We will have much more from Kennard over the next couple of days as Michigan’s team camp continues. After the jump find other notes on team camp, the Kevin Durant Skills Academy and more.

Evelyn is one of the top ‘15 guards in the state of Michigan but has been sidelined with an injury for much of the spring. Returning to action this week, Evelyn could be poised for a big spring. He looks to distribute and although his shot is a bit flat, it’s reliable. The 6-foot guard is tough going to the basket and stays aggressive next to his running mate, 6-foot class of 2014 Lindsay Hunter IV.

The Kevin Durant Skills Academy tipped off on Friday afternoon in Washington D.C. and two names very familiar to Michigan fans are participating. Glenn Robinson III is playing in the college sessions with Devin Booker in the high school portion.

Robinson measured in at 6-foot-6.5 inches tall (with shoes), 211 pounds with a 6-foot-9 wingspan. While his measurements are solid, his weight isn’t in line with his tweeted stats earlier this spring. Robinson was noted for having one of the smoothest jumpshots according to one scout in attendance.

Booker measured in at 6-foot-6, 194 pounds with a 6-foot-7 wingspan. Booker recently updated his blog at USA Today, reporting a 3.9 GPA and that he plans to cut his list to “five or so” after the summer.

Since I’m here in Michigan, I went to a team camp there with the Wolverines. I’m probably gonna get over to Michigan State too and I have to get down to Kentucky. That’s the only school that I haven’t been to and me and Coach (John) Calipari talk about getting down to Lexington all the time so I’m definitely gonna make that happen.

The contact with North Carolina has slowed down a little bit since they got a commitment, but they still text from time to time and let me know that they need a shooter and would love to have me.

Duke reached out to me last week and basically just told me that they still wanted me and how they felt that Duke was still a good fit for me, and I feel the same way so there’s still mutual interest there.