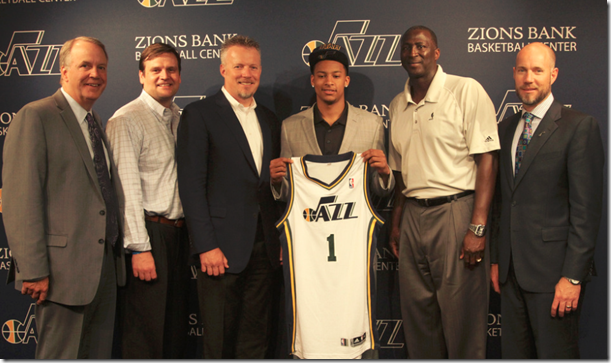 Trey Burke’s unlikely route from undersized point guard playing in the shadow of Jared Sullinger to college basketball’s best player has been well-documented. Burke originally committed to Penn State early on in his career. When he was overlooked by hometown Ohio State the second time around, he appeared ready to commit to Cincinnati before John Beilein and Michigan took a flyer on Burke to replace the recently-departed Darius Morris.

The rest, of course, is history.

But throughout the draft process, history appeared to be repeating itself for Burke. Immediately following Burke’s transcendent college season, his NBA stock appeared to be safely among the top five picks in the draft. Images of Burke scoring 24 points in 26 minutes against Louisville were still fresh in the minds of NBA scouts and general managers — it seemed obvious that Burke was hands-down the best point guard in the 2013 draft class.

But then, as the workouts, combines and interviews wore on and speculators churned out mock drafts, Burke’s stock fell. Following the NBA Draft combine, where Burke’s measurables were less than stellar, Burke heard the same questions he’s heard his entire basketball-playing life: is he tall enough? Is he quick enough? Can he guard?

All of these questions amounted to Burke slipping out of the top-5 projections and settling around the top 10, with some sites projecting him lower than that. This left open an enticing possibility for Michigan fans — could Burke wind up falling to the Detroit Pistons at the eighth pick?

On Thursday night, he did. But, just like the Buckeyes before them, the hometown Pistons passed on Burke.

“I thought me coming from Michigan and them needing another guard, I thought I could end up going to Detroit,” Burke said during a press conference on Thursday night. “But once they passed on me, I was kind of like, now I don’t know where I’m going to go.”

Burke was uncertain about his future past the eighth pick because, he said, he hadn’t worked out for any team past the ones picking in the top eight. Everything was thrown into doubt at that point: would this mean a steep slide out of the top 10? Out of the top 15?

Luckily for Burke, he didn’t have to wait long for an answer. With the very next pick, the Minnesota Timberwolves made him the ninth overall selection of the 2013 NBA Draft.

“I hadn’t worked out with any other teams past the No. 8 pick,” Burke said. “Luckily I was the next pick right after that. So I was just excited.  I was excited to hear my name called.”

But his draft day odyssey was far from over. Burke was perplexed — he called being selected by the Timberwolves “a shocker” — he knew Minnesota wasn’t in need of a point guard, with its long-term future staked in Ricky Rubio. But he found out minutes later he was going to be traded.

Burke sat in the back room at the Barclays Center until the trade was made final. And just like that, he was the newest player on the Utah Jazz. Needless to say, it was a hectic and mentally exhausting night.

“I got drafted by the Timberwolves and then I found out I was getting traded to the Utah Jazz,” Burke said. “My mind was pretty much everywhere.  I was just ready to figure out where I was going to finally end up.”

Burke ended up going to the Jazz for the 14th and 21st picks, which the Timberwolves turned into Shabazz Muhammad and Gorgui Dieng, respectively.

Despite the tumultuous night, Michigan’s former star has landed in what appears to be a favorable situation in Utah.

Burke steps into a Utah roster that doesn’t have a point guard signed for next season due to the expiring contracts of Mo Williams, Earl Watson, Randy Foye and Jamaal Tinsley. Williams is demanding a starting position if he is to re-sign and that just might signal the start of the Trey Burke era in Salt Lake City.

While Al Jefferson and Paul Millsap are also free agents, the Jazz have their fair share of young talent with Marvin Williams, Enes Kanter, Derrick Favors, Gordon Hayward and Alec Burks on the roster. Burke could step in and be the facilitator for a promising group. Michigan fans saw what Burke was able to do when surrounded by talent this past season, and it appears he’ll be placed in a similar capacity in the NBA.

“I would prefer to be pretty balanced. I know I have some really good shooters around me. I think with the guys that the Jazz already have, we can get up and down the floor as well,” Burke said. “But I think I’m going to be a guy that’s going to bring the winning mentality to the team, that can make plays. And can get his teammates involved and score when I need to score and hit the open man when I need to hit the open man. I think it’s a feel for the game that I bring to a team like the Jazz. And I’m looking forward to helping them win.”

How great of a fit did Burke find in Utah? Many pundits feel he could be the leader for Rookie of the Year honors. “Burke will be the NBA Rookie of the Year. I’d take odds on that right now,” writes CBS Sports’ Gary Parrish.

Burke is never short on confidence. At an introductory press conference in Utah in on Friday afternoon, he emphasized that he felt he could be a starter in Utah and a future all-star.

“If they asked me, I think I can be an All-Star in the league someday,” Burke told reporters. “That’s just my opinion.”

I wouldn’t bet against him.