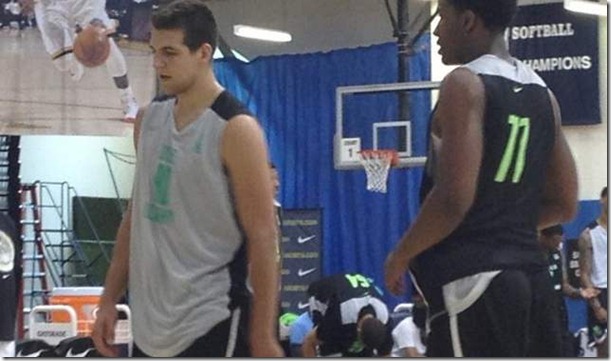 Mitch McGary was in New Jersey last week for the Nike Big Man Skills Academy and Mark Snyder was in attendance to interview him. McGary shared his thoughts on returning to school but admitted he feels pressure of leading the Wolverines as a potential All-American.

“It’s a relief that I had all that stress off my shoulders (coming back) and I had a lot more stress actually added to my shoulders,” McGary told the Free Press on Wednesday at the Nike Skills Academy featuring Amare Stoudemire in Union, N.J.

Snyder has much more from McGary including talk of rejected USA Basketball, the returning team, and much more. The Nike Academy was also an opportunity to pit McGary against some of the top college big men in front of NBA scouts. GothamHoops.com was in attendance for the event and posted scouting notes on McGary’s performance.

A factor in the Wolverines NCAA title run in 2012-13, McGary aims to increase from last season’s averages of 7.5 points and 6.3 rebounds in his sophomore stint. As proclaimed throughout the Tournament, McGary ran the floor with ease on Wednesday, playing through contract around the rim on both ends of the floor. At 6-10 1/2, 266 lbs., the rising sophomore competes at a high-level, while playing with an even higher motor. In the post, McGary proved capable of slicing passes through defenders’ fingertips, successfully landing the ball in the hands of a cutting teammate for an easy score.

The News-Press profiles Ricky Doyle’s development outside of the AAU limelight, focusing on his workout regime instead of travleing to AAU events. The article also includes some quotes from Doyle on his experience at Michigan and NBPA Camp in June.

“He has a drive to be good and a work ethic a lot of guys don’t have,” Herting said. “I could tell him to do a single drill for an hour, go home, tool around and come back after 59 minutes and he’d still be doing it.”

Doyle said he gets just as much satisfaction out of a successful practice as he does playing a game.

“If you really love the game of basketball, you’ll have fun no matter what if you have a ball in your hands,” he said. “Yeah, the conditioning will get a little tiring and I’ll wake up early sometimes and wonder why I’m doing this. But really, in the end, working and getting better is how I ended up loving the game.”

Doyle struggled at NBPA Camp but it’s clear that his development plan is working as he continues to improve his game. His next test in front of national scouts will be at the Super Showcase in Orlando during the July evaluation period. The News-Press also posted a compilation of Doyle video clips.

Kameron Chatman had the unique distinction of being invited to the Nike Point Guard Sksills Academy despite his nearly 6-foot-7 height. Gotham Hoops was in attendance for the event and noted Chatman as a standout.

At 6-6 1/2, Chatman (pictured above) proved to be one of the more versatile players in the entire camp. The south-paw, who sports a 6-9 1/2 wingspan, displayed a proficient handle and a high basketball IQ. Throughout the day, Chatman proved capable of leading an offense, using his size and length to create scoring opportunities for teammates. An able three-point shooter, the rising senior finished above the rim with relative ease throughout the day, as well.

Iowa Elites posted this recent footage of Chatman from the NBPA Top 100 Camp in Charlottesville.