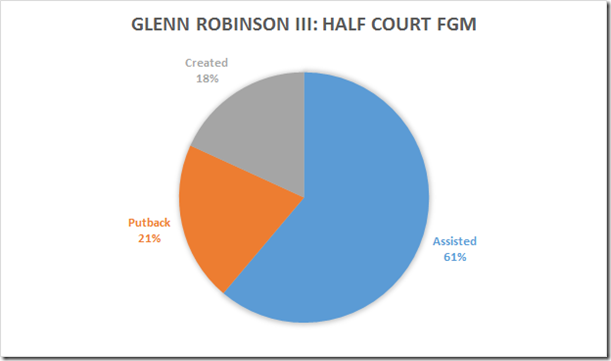 In terms of accolades, stats and accomplishments, Glenn Robinson III’s freshman season couldn’t have gone much better in Ann Arbor. Robinson started all 39 games for a team that reached the National Championship game. He averaged 11 points and five rebounds per game and was named to the All-Big Ten Freshman team.

By the time Robinson’s first season was over, he was projected nearly unanimously as a likely NBA lottery pick before opting to return to school. Despite Robinson’s sterling season, it’s impossible to shake the feeling that we don’t really know all of what Robinson can do – for better or worse.

Robinson used just 15% of Michigan’s possessions when he was on the floor. Trey Burke, Tim Hardaway Jr., Nik Stauskas and (especially in the NCAA tournament) Mitch McGary were Michigan’s primary offensive options. In terms of possession usage, Robinson was comparable to the man he replaced, Zack Novak. Despite that fact, Robinson’s ruthless efficiency and ability to finish at the rim was unmatched and made his teammates look great.

Robinson passed his test as a freshman. John Beilein couldn’t have asked for much more but it’s impossible to ignore the shift in role that awaits him as a sophomore. The grading scale and expectations will change as a sophomore.

Bottom Line: Robinson’s efficiency will obviously see some regression toward the mean as he uses more possessions but his ability to handle roughly another 200 possessions in a season will determine his future. If he thrives on the wing as a primary scorer for the Wolverines, he’s probably a top-10 pick. If he struggles with ball handling duties and creating offense off of the dribble then he could start to see a slip in his draft stock.

Give him credit, he’s confident that he’ll elevate his game .

I feel like people have only seen one side of my game, cant wait to see the shock on peoples faces when the see the real GRIII. #Excited

Robinson’s return to school was a gamble in himself. He could have gone pro, banking on NBA general managers believing he could elevate his game. But instead he returned to school to prove that he can elevate his game. Robinson had a great freshman year. He did everything that could be asked of him. And for all the talk about Trey Burke and Tim Hardaway Jr. making Robinson look good, he made them look great by finishing nearly every opportunity. Every coach in the world would beg to have a supporting option as efficient and athletic as Robinson on their roster.

Now it’s time to see if he’s ready to embrace his new role and step up as a leader for the 2013-14 Wolverines.