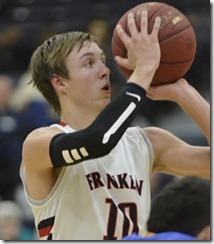 Michigan finished up with its team camp on Sunday, and plenty of recruits were on hand to show the coaching staff what they could do. UM Hoops was on hand to take in the action throughout the weekend in Ann Arbor, watching the likes of top-30 prospects Luke Kennard and Seth Towns as well as Southfield Christian ‘15 point guard Bakari Evelyn and a number of other local targets. High schools traveled as a team to the camp and each played five games — there was no tournament structure and no championship. While it wasn’t one of the deepest camps in recent years, there were still noteworthy appearances from promising recruits. Below are individual scouting reports based on what we saw this weekend.

High up on the list of more than a few big-time programs — including Notre Dame, Ohio State and Indiana — Luke Kennard’s reputation preceded him going into team camp. He was the best player there and he showed it. The Franklin, OH native has a smooth, consistent jump shot that he can make from Trey Burke range; he’s the clear leader of his team and acts like it, getting the most out of his teammates; he is almost impossible to contain one-on-one off the dribble because of his length and quickness. Kennard is especially adept at creating space for his shot, the release of which appears to speed up or slow down depending on need — with no detriment to its accuracy. His shooting is primarily off the dribble — Kennard is at his most lethal when he has the ball in his hands. Another strength is his ability to draw fouls and get to the basket. Kennard is opportunistic and very smart, able to take advantage of the slightest position he may have on a defender.

There were times when Kennard was called upon to bring the ball up against pressure defense, and he struggled a bit in that area. When confronted by a trapping press, Kennard was often forced into making poor decisions with the ball and had a tendency to throw it away when trying to do too much. On offense, the talented swingman has a tendency to dominate the ball. He isn’t selfish, he just puts his team on his back offensively when there is a better play to be made.

That being said, Kennard showed why he is considered such a high priority in the class of 2015 by Michigan’s coaching staff. He can shoot the lights out and take his defender off the dribble with ease. Not only that, but he works hard, too — Kennard consistently hit the glass hard and got to the line with relentlessly aggressive drives to the hoop. Kennard, in short, is who we thought he was.

Playing for Northland — the alma mater of none other than Trey Burke — Seth Towns is a talented member of the 2016 class. He already stands at 6-foot-7 and possesses a versatile set of skills. Towns spends most of his time on the perimeter off the ball and during team camp his main offensive contribution was spot-up shooting. His jump shot is fluid and smooth and very reliable for a player so young, but his release point is quite low, around shoulder-chest height. While Towns doesn’t need much help getting his shot off against defenders who are often much shorter, it would help him to get his release point higher in the future. Towns didn’t spend much time in the post, and when he did his go-to move was a turnaround jumper. While he was able to hit that shot and it was consistent enough to be a reliable weapon, I would have liked to see him make post moves toward the basket more.

Towns must be stronger with the ball in the post, as he was stripped regularly — mostly he should concentrate on keeping the ball high. He can hit his jumper whenever he wants from almost anywhere, and he should be more aggressive when looking for scoring opportunities. Both of those things will likely come with experience. Towns is a very talented prospect with a solid game and a bright future.

I’m a big fan of the way Bakari Evelyn plays. The 6-foot guard from Southfield Christian is relentless and confident, never afraid to take the ball to the rim or pull up for a long 3-pointer. His jump shot is unorthodox but it goes in  — Evelyn has an extremely quick release, so much so that it appears to be more of a flick because of its lack of follow-through. Evelyn’s team ran a ton of pick-and-roll, and he showed a knack for making the right play when confronted with an opportunity off that set. Evelyn gets after it on defense and never lets up, playing high-pressure man-to-man most of the time I watched him. That aggressive style translates to the offensive end as well — Evelyn is fearless when driving to the basket, great at drawing contact and finishing through it. His quick release allows him to pull up and fire from any distance, and his handle allows him to easily create space off the dribble. Evelyn isn’t very big, and his shot will likely need work at the next level. His passing could still improve, though he had his moments. Evelyn is an intriguing in-state prospect to keep an eye on in the class of 2015.

I only watched the quick rising class of 2015 Muskegon Forward Deyonta Davis play one game over the weekend but got a taste of his abilities. The long, pole-skinny big man from Muskegon was impressive. At 6-foot-8, Davis was one of the tallest players at camp and he has a wingspan that goes for days. He mostly stuck to the post and displayed a soft touch around the basket. His aggressiveness was a bit inconsistent but he was active on defense and on the boards. He keeps the ball high and his timing on rebounds and blocking shots is very good. His athleticism is obvious and he runs the floor well. Davis has a high ceiling, but is too thin to be strictly a post player. I didn’t see him show off other skills during the game I watched — he’ll either need to bulk up or diversify his game. Still, a very interesting prospect to keep an eye on.