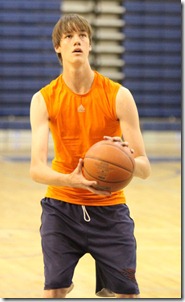 Scout.com has a new No. 1 in the class of 2015 and he sits squarely on Michigan’s recruiting board. Las Vegas big man Stephen Zimmerman is ranked No. 1 overall and a host of other prospects round out Scout.com’s top-75.

Now that all major scouting services have updated their ‘15 rankings, the consensus charts from 247 Sports are also up to date:

Jalen Brunson is the only Michigan point guard target with an offer but Sedrick Barefield is a name to remember. There’s high mutual interest between Barefield and Michigan and scholarship offer could very well be waiting for Barefield when he makes a visit to Ann Arbor.

The California point guard continued his steady play this spring at the Fairfax Summer Classic with his high school squad. Joel Francisco reports, naming Barfield his “PG With Poise”:

2015, PG, 6-foot-1, 185 pounds
Status: Claims offers from UConn and Boston College, while Michigan, Florida and Baylor are showing interest.
Barefield is a chiseled lead guard who always plays with an even keel. As his team’s lead was slipping away against Long Beach Poly, Barefield took the initiative and got to the free throw line to sink two clutch free throws to thwart Poly’s comeback. He gets into the lane utilizing his strength and his 3-point shot has improved. However, the next step in the process is the midrange pull-up when the lane is shut down.

Trevon Bluiett is in California for an Under Armour Grind Session event. He reported to Rivals that he’s still considering 24 schools and hasn’t set any official visits at this point despite almost taking one to UCLA. However, his father told Sam Webb ($) that Michigan would “for sure” get an official visit.

We’d be surprised if Bluiett didn’t use one of his official visits to trip to Ann Arbor either in August or this fall. Here’s footage of Bluiett at the NBPA Top 100 Camp earlier in June.

Class of 2016 point guard target Derryck Thorton Jr. has also had a big start to the Under Armour camp in Los Angeles.

Nice stretch for Derryck Thornton, Jr. The 2016 PG had several assists, got to basket, pulled up for two and hit a three off the catch.

Telep: Chatman could move up in July

Kameron Chatman caught Michigan’s attention this spring and is poised to blowup in July according to ESPN’s Dave Telep:

Kameron Chatman (Long Beach, Calif./Long Beach Poly), No. 42
Why he could move up: College scoring skills
Chatman is a multi-skilled player with a polished college scoring arsenal. But those skills have flown under the radar as Chatman is still relatively unknown on the national scene after sitting out the high school season due to ineligibility following his transfer from Oregon. He managed to open a lot of eyes with his play at the NBPA Top 100 Camp a few weeks ago. Chatman has a high IQ and is a versatile scorer. The southpaw is interchangeable up front, able to slide to the 4 and stretch you out behind the line or go inside to dominate smaller guys at the 3. You can see the confidence in his game and he has the instincts to get to his spot on the floor and score at all three levels.

Chatman’s father told ZagsBlog that he hopes to trim his list after July, he also mentioned Michigan.

“We like Michigan,” Canaan said. “I’ve known Coach [John] Beilien and he’s known me since  I was playing. Obviously, on the year that they had you gotta pay attention to that.

“They’re trying to lock down some national recruits and we definitely like Michigan.”

Class of 2016 guard Kyle Guy recently visited Indiana and is receiving interest from Michigan among other regional high majors. Guy wasn’t offered by Indiana but could see plenty more interest in the coming years.

“I feel like offers at a young age are a little overrated,” he said. “They want to go through the process and recruit me and that’s what I want too. I’m just worried about getting better.”

Guy did pick up a scholarship offer last week, though, from Indiana State. It came after Lawrence Central played in the Indiana State team camp on Wednesday.

t’s all very early for Guy, however. He doesn’t plan on making an early commitment, even if he does pick up some more offers after the July evaluation period.

“I don’t think I could do that,” he said. “Me and my parents have talk about it, and we just need to stay steady and not get in over our heads. I just want to play it out and go through the process.”

Dwayne Bacon and Corey Sanders highlighted a Future 150 Camp in Orlando, here’s a scouting report from the camp hosts.

Dwayne Bacon, 2015 SG: Dwayne came into the camp as the highest profile recruit nationally, and he didn’t disappoint with his play. The 6’6″ guard is a smooth wing who is confident with the ball in his hands, and even more confident playing off the ball. He uses his length and awareness to score easy baskets at the rim as well as in transition, and his jump shot has improved over the past few months. Overall, a big weekend from the prospect with recent offers from Louisville and Miami (Fl).

Corey Sanders, 2015 PG: The most exciting (and most athletic) kid to watch this weekend was a no-doubter in Corey Sanders. The Showtime Ballers point guard showed why he already holds several offers and more schools are hot on his trail. He used his quickness to get to the rim, where he showed off his ridiculous jumping ability to finish with contact. The scoring point guard also showed off some range, but he generally likes to play at the rim.