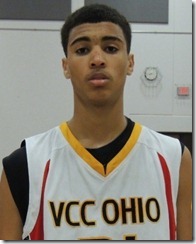 Seth Towns is a versatile 6-foot-7 class of 2016 wing prospect out of Northland High School in Columbus, Ohio.

That’s the same Northland High School that Trey Burke, Michigan’s National Player of the Year and top-10 draft pick, graduated from in 2010.

Towns is a rising star in his own right — at Northland this past season, he played a significant role on the varsity team as a freshman, averaging 10 points and six rebounds per game. While Towns will inevitably blaze his own trail in the Columbus high school basketball scene, it’s impossible to ignore that he’s next up in what’s developed as a prestigious Northland talent pipeline.

The talented swingman recently visited Burke’s old stomping grounds in Ann Arbor for Michigan’s Team Camp, but during a phone conversation on Saturday, he updated us on the Trey Burke mania collectively sweeping Columbus leading up the NBA Draft.

“Not just in the (Northland basketball) program but all around the school, everybody talks about Trey,”  Towns said. “He’s really well-known. It was all over Twitter, Instagram. I mean, that’s all you saw in Columbus was Trey’s face.”

Towns said he and Burke talk occasionally and that the point guard is determined to help his old high school however he can.

“His sister’s my age, so we know each other pretty well. And then, me and his dad, we talk every time we see each other,” Towns said. “Every time I see Trey, we convers ate about things. He comes down a lot to talk to us and help us with a lot of things at Northland.”

While the novelty of knowing a first-round draft pick is exciting, Towns is determined to establish his own legacy at Northland and beyond. He took steps toward that goal at Michigan’s Team Camp, displaying dizzying potential and an impressive all-around game.

It’s tough to pin down a definite position for Towns — he played the four most of the year at Northland, but has a skill set that better fits the three in Michigan’s system. He can shoot the lights out, but also has a developing back-to-the-basket game.

“I would say that I’m a versatile player, big but I can put the ball on the floor a little bit,” Towns said. “I love shooting. If someone plays too far back, I just take the jumper. If they’re smaller, I’ll put them in the post, if they’re bigger I’ll take them to the rim. I guess I’m just more versatile than anything.”

His versatility has attracted attention from all over. Towns already holds offers from Dayton and Xavier, but has been contacted by Michigan, Ohio State, Virginia Tech, Illinois and West Virginia.

During camp, Northland was dominant. Each team played five games and Northland won four, losing by just four points in its final contest. Towns was all over the floor — the wing grabbed rebounds, shot well from distance, and showed off some nifty post moves.

Along with a solid performance in front of Michigan’s assistant coaches, Towns was also able to take in some of the facilities, playing in the Player Development Center and the newly-renovated Crisler Center. The Columbus native said he spoke with Bacari Alexander for a bit during camp, and came away with a favorable impression of Michigan’s staff overall.

“I really like (the coaching staff),” Towns said. “Especially how they use their young guys. They’re really useful to the point where they get everybody involved with the game, whether you’re a senior or a freshman. They seem to have a way with their guys and they trust them.”

Nowhere was that trust more evident than in the way Michigan’s coaching staff allowed Burke to operate freely in the flow of the offense — something that wasn’t lost on Towns as he watched his fellow Viking over the past two seasons.

“Trey went to Northland, so that made me watch them a lot, and they put a lot of trust in him and they let him do a lot of things he thought was right because they just trust him,” Towns said. “They know what they’re doing.”

Towns admitted that Burke has had an effect on his perception of Michigan, “Because of how much I’ve watched them and I’ve developed a liking for them. I already like the coaches and everything, but watching them so much has I guess put Michigan in my mind.”

Turning the focus to his own game, Towns said he hopes to use this summer to add muscle to his lean frame, as well as work on his perimeter handle so he can be stronger with the ball in his hands.

John Beilein’s absence at team camp because of coaching in the World University Games in Russia dampened Towns’s hopes of using the trip to team camp for an unofficial visit. However, Towns said he is likely planning a visit back to Michigan in August.