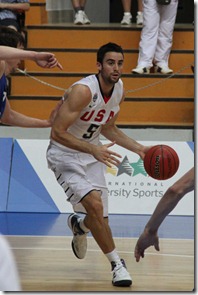 Mitch McGary and Glenn Robinson III wrapped up their summer camp circuit in Las Vegas as the LeBron James Skills Academy came to a close on Monday.

McGary reportedly had the more impressive camp. Sam Webb has posted a number of ($) glowing updates ($) on McGary’s play in Las Vegas throughout the week. Webb reports that McGary is closer to 250 pounds than his listed 266 and that he’s playing well. Webb’s updates read like the following sentence on repeat, raving about McGary’s versatility and offensive ability in the camp setting.

The player that I saw emerge the #1 big man in the country two years ago, the player that was on display for Michigan at the NCAA tournament… that’s the player I’m seeing here in Vegas.

Reports are that Robinson had a quieter week but both sound like they had successful summers. Robinson earned praise from Premier Basketball as a “three level scorer”. McGary is hoping to prove that he can play like he did in the NCAA tournament consistently over a full season. Robinson is working to add to his game and become a more complete offensive player. It appears both sophomores have made strides in their games.

Robinson and McGary both tweeted praise of their teammate’s abilities

My dude @MitchMcGary4 knocking down shots at LebronJamesSkillsAcademy. His games looking right!

My bro @GRob_1 dropping dimes left and right at the LebronJamesSkillsCamp!! Y'all ain't ready for this year!

While McGary had a good week, it does sound like he might have got dunked on by LeBron James according to this tweet from John Lucas.

The next step is to return to Ann Arbor and begin gelling with their new teammates on the roster. Individual workouts are underway now that everyone is enrolled in summer school.

Bacari Alexander is tweeting again and Mark Snyder rounded up Alexander’s praise for every Wolverine on the roster in his first “tweet blitz”. Some of our favorites:

“Caris Levert has gotten stronger and Stands at 6’6″ and some change. The biggest change is his confidence. #mygoodness”

“Derrick Walton Jr. Has a presence about him that seems very familiar. #hmmmm…”

“Zak Irvin is not afraid to take big shots at big times. Nice attribute to have. #intriguing”

“Mitch McGary is on the summer circuit for college guys and its easy to see that he has an engine that any car would love.”

In other team news, Nik Stauskas is up to 205 pounds according to an picture of him on a scale that he posted to Instagram.

Burke signed the maximum rookie contract allowed – 120 percent of the $2,032,300 slotted rookie salary. That means Burke will make $4,987,320 guaranteed over the first two seasons of his deal with team options in the third and fourth years.

Burke struggled in his summer league debut in Orlando, finishing with 1-of-12 from the field with 8 points, 7 rebounds and 5 assists in 32 minutes. Burke and the Jazz will be back in action today at 3 p.m. (NBATV) against the Houston Rockets.

Hardaway signed a “standard 4-yr, $6.1 million deal” according to his agent Mark Bartelstein. Hardaway will play with the NY Knicks summer league team in Las Vegas. The Knicks tip off summer league action on July 12th against the New Orleans Pelicans. Hardaway recently sat down with the Knicks official website for a seven minute one-on-one video interview. Hardaway has reportedly been impressive in early workouts with the Knicks but New York also re-signed guard J.R. Smith which will provide additional roster competition.

Team USA ‘s World University Games squad is off to a 2-0 start in Russia with with a 140-46 win over UAE And a 96-53 win over the Czech Republic. With four Big Ten players on the roster – Michigan State’s Adreian Payne, Indiana’s Yogi Ferrell and Will Sheehey, and Iowa’s Aaron White on the roster, John Beilein is in a precarious position of making his opponents better. He emphasized that he’s not afraid to coach up his Big Ten foes.

“We’re going to sit down tomorrow, that’s for sure,” said Beilein, an assistant coach on Bob McKillop’ USA staff. “Adreian and I are going to figure out why he got in foul trouble today. I think he’s going to have to adapt to the way they’re going to call fouls here. I know this (meeting) sounds a little unique. You’ve got the Indiana guys and the Michigan State guy and a Michigan coach on this team. Sure, these are guys that we compete against. But it’s also USA.”

“We’ve got to make us all better,” Beilein said. “I’m sure if opposing coaches from the Big 10 were coaching my guys I’d like them to use this time to make my guys better. That’s what we’re trying to do.”