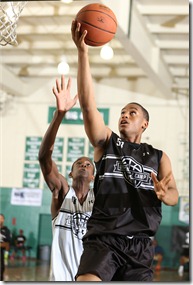 Apologies for light posting over the holiday, we should be back in full swing as we head into the July recruiting period.

The big news over the weekend revolved around Indianapolis. Brad Stevens took the Butler job, the Bulldogs hired Brandon Miller instead of LaVall Jordan and rumors began to fly regarding Trevon Bluiett.

Bluiett’s father set the record straight and informed the media that Butler was still very much on the 6-foot-6 rising senior’s list. Then again, so are 23 other schools. Trevon has discussed trimming his list since last July and has yet to remove anyone from the running. (Photo: Kelly Kline/Under Armour)

Butler is still on Bluiett’s list but it’s undeniable that Brad Stevens departure will hurt the Bulldogs in his recruitment. It was no secret that Butler was in great shape – most likely leading – for Bluiett’s services. Brad Stevens was handling Bluiett’s recruitment personally and his departure is almost certain to be a blow for the Bulldogs. LaVall Jordan is his primary recruiter for the Wolverines so it’s silly to think that Butler’s coaching decision won’t have an effect on Bluiett’s decision.

So Butler is still on the list but it’s clear the dynamic has changed. 247Sports’ ‘Crystal Ball’ provides a more politically correct way to convey trends like this. A week ago, 100% of the projections had Bluiett headed to Butler. Now the Crystal Ball says 78% Michigan with all of those updates coming July 3rd or later.

Devin Booker will visit Kentucky for Big Blue Madness on October 18th. Booker has visited Michigan seven times, recently tripped to Michigan State and has seen all of the other schools on his list. However, Kentucky is the newest to the party and has made a big splash as John Calipari has been recruiting Booker personally. Booker hopes to narrow his list and take some official visits this fall.

Luke Kennard updated his recruitment at the LeBron James Skills Academy with Scout.com’s Simone Scott. Kennard admitted that he has some favorites and listed off Ohio State, Michigan, Indiana, North Carolina and West Virginia when probed for a top five. Kennard said he plans to make his decision sometime junior year, “from the beginning to the end”.

ESPN’s Paul Biancardi was impressed with Kennard’s play on day one of the camp. Kennard, who measured in at 6-foot-5, 182 pounds with a 6-foot-4.5 inch wing span, is one of the few 2015 prospects at the event.

This left-handed shooting guard always finds ways to put the ball in the basket. In skill work he was a constant with making shots, and it quickly translated into the games. Kennard understands the value of the shot fake to lift his defender and create enough separation to shoot it or go all the way to the rim. Once in the lane he showed an ability to finish with a floater and off-balance runners. Kennard already has a list of offers from Ohio State, Michigan, Michigan State, Indiana, Notre Dame, Butler, Dayton, Xavier and West Virginia, and he is also hearing from Duke, North Carolina, Kentucky and Louisville.

Kevon Looney is the highest rated class of 2014 prospect that John Beilein and his staff are still pursuing. Looney is a consensus top-ten recruit and would be in a shoe in to replace Glenn Robinson III if he enters the NBA draft after next season.

Many presume Looney to be a Duke lean but he plans to trim his list to five schools this fall and take his official visits. Dave Telep writes that the two head coaches that Looney is hearing the most from are John Beilein and Tom Izzo:

ESPN 100 power forward Kevon Looney (Milwaukee/Hamilton) will cut his list to five at the end of the month. Duke, Florida, Michigan, Michigan State, Tennessee, Georgetown, Wisconsin and Stanford get a lot of play right now, and the most active head coaches have been John Beilein and Tom Izzo. “(Michigan State assistant) Dane Fife used to call a lot, but my mom told him she wanted to hear from the head coach and now Tom Izzo calls the most.” Rule No. 1 in recruiting: Obey the mother.

Chatman sat out his junior season due to transfer rules but it hasn’t taken long for him to emerge as a star on the AAU circuit. Chatman will trim his list to five schools this August before school begins, according to Scott Sommer, in hopes to commit this fall.

ESPN 100 small forward Kameron Chatman (Long Beach, Calif./Long Beach Poly) is one of my favorite basketball players in the 2014 class. He samples from so many areas of strength for his position, including IQ, shot making, passing and defense. Whichever college gets him won’t have him all four years. Michigan, Oregon, Arizona and Connecticut are likely to receive official visits. Arizona also has a little hook with him: Both his father and Arizona assistant coach Damon Stoudamire are Portland natives.

Chatman’s shooting was considered a weakness earlier this spring but he’s showing improvement.

Not really sure what Kameron Chatman can't do. Hits a three then makes a great pass for a bucket

Kameron chatman has really improved his shooting. He has so many tools. Can post up, good passer and can handle. Play 4 position if neesed

A terrific passer from the small forward position, Chatman also had success shooting the ball from the outside Sunday.

Jalen Brunson has emerged as one of the top point guards in the country and the Michigan offer kept up his strong play at the LeBron James Skills Academy. ESPN reports

Brunson doesn’t have blazing speed or quickness, but he is very clever while dissecting the defense from the point guard position. Ball fakes, hesitation dribbles and playing on balance are his calling cards as he made one play after another. He had a couple assists where it seemed like he had eyes in the back of his head.