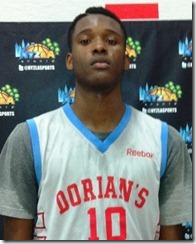 The July evaluation period tips off this afternoon and will run for the next three long weekends (July 10-14th, 17-21st, 24-28th) throughout July. College coaches will be on the road (or in the air) traveling between major AAU tournaments in Indianapolis, Augusta, Las Vegas, Orlando and in a host of other gyms throughout the country.

The period starts today with the Nike Peach Jam in Augusta, the Adidas Invitational in Indianapolis and the Reebok Breakout Challenge in Philadelphia.

For class of 2014 prospects, it’s the last chance to impress college coaches on the AAU circuit before your senior year. For underclassmen it’s a chance to emerge as a big time target. One strong tournament could be enough to propel a prospect into the top-50 and at the top of high-major coaches’ recruiting wish lists for the next year.

Here are six things to watch as Michigan’s coaches hit the road in July.

John Beilein is still away in Russia for the World University Games so Jeff Meyer, Bacari Alexander and LaVall Jordan will be Michigan’s only three coaches on the road at the Adidas Invitational, Nike Peach Jam and Reebok Breakout Classic this weekend.

Not having the man in charge available for recruiting could dampen some of Michigan’s gusto on the circuit but it’s safe to assume that his absence has been well communicated to Wolverine prospects. The Wolverines should still have a heavy presence at the Nike Peach Jam, where offered prospects like Trevon Bluiett, Luke Kennard and Vince Edwards will be playing, as well as the Adidas Invitational where they’ll watch the likes of Kevon Looney, Jalen Coleman, Stephen Zimmerman, Sedrick Barefield and many others.

It feels like Michigan is on the verge of becoming the next “Point Guard U” but the Wolverines haven’t been able to strike point guard gold since Trey Burke’s emergence as national player of the year quite yet. That’s partially due to John Beilein’s offer policies.

Jalen Brunson is the highest rated point guard prospect on Michigan’s recruiting board and, depending on who you ask, the country. He visited and got his offer but he’s in no hurry to make a decision.

Sedrick Barefield appears to be the primary candidate for the next point guard offer and he will put his talent on display in the Midwest this weekend at the Adidas Invitational. Barefield will need to visit in August or in the fall before receiving an offer and has had a solid spring. His July performance could alter the course of Michigan’s point guard evaluation.

Selfishly, we are excited to finally see Barefield in person at the Adidas Invitational where he could hypothetically match up against other Wolverine guard targets including Jalen Coleman and Hyron Edwards in bracket play.

Edwards didn’t have the best summer but remains a viable option. He’s passed the visit criteria but the Michigan staff doesn’t appear ready to extend an offer. Florida guard Corey Sanders is yet another option. He’s in the same boat as Barefield, needing to visit before any scholarship talk is relevant, but he’s hoping to visit Ann Arbor with his teammate Dwayne Bacon this fall. The key for Sanders this July will be to prove he’s a point guard. He has the handle and the athleticism but we want to see if he’s a true point guard.

3. Can Jordan Barnett or Jaylen Johnson earn an offer?

Devin Booker, Kameron Chatman, Trevon Bluiett and Vince Edwards have been Michigan priorities for quite some time. All seem content on taking official visits this fall before advancing toward a decision. Michigan will spend a significant amount of time showing attention to all four players (and Kevon Looney) throughout July but will also be evaluating other options.

Jordan Barnett was impressed by his Michigan visit in early June but was told that he wouldn’t earn an offer until John Beilein watches him play. That opportunity will come this July but perhaps not at Peach Jam due to Beilein’s absence. Barnett will be in Orlando for the AAU Super Showcase in Orlando from July 24th through 27th and that could be his opportunity.

Barnett is a super athletic combo forward ranked in the top-100 nationally and appears to be a viable option to compete with Kameron Chatman and Vince Edwards for Michigan’s combo forward spot.

Another name to watch is Jaylen Johnson. The Ypsilanti post player has played well all spring, earning an invitation to the LeBron James Skills Academy. He’s a hard working, athletic four man that doesn’t quite fit the mold of a traditional Beilein-stretch four but is too talented to ignore. The Wolverines have been tracking Johnson for quite some time but haven’t offered, he has a chance to impress this July.

Ricky Doyle isn’t at national tournaments and camps every weekend throughout the spring and summer. The Michigan commitment doesn’t play AAU ball so his chances for national exposure are limited. He was injured at the City of Palms Classic in December and had a quiet weekend at the NBPA Top 100 Camp in June.

The camp environment isn’t always the most conducive to strong post play and the good news is that Doyle will have another opportunity to impress national scouts at the Super Showcase in Orlando. Doyle will be playing with his high school team rather than a hodge podge group of highly rated players looking to impress scouts and that familiarity could be key for a better showing in July.

The top targets on Michigan’s ‘15 recruiting board are clear with offers Luke Kennard, Jalen Coleman and Jalen Brunson and heavy interest in Stephen Zimmerman, Diamond Stone, Dwayne Bacon and Sedrick Barefield but there’s another group that we’ll be watching for improvement. July isn’t just about watching the top names, it’s about tracking the development of the next tier of players. For Michigan in the class of 2015 that group includes players Noah Dickerson, Nate Fowler, Evan Boudreaux, Eric Davis, Bakari Evelyn, AJ Harris and a host of other prospects that could come to light this July.

Some big names on Michigan’s class of 2016 recruiting board are already well known. Cassius Winston and Josh Jackson are top-25 national prospects that play their high school ball right down I-94. The Wolverines are tracking west coast point guards Derryck Thornton Jr. and Devearl Ramsey. Michigan has paid close attention to the Midwest as well. Eron Gordon has been a priority and Northland wing Seth Towns starred at the Wolverines’ Team Camp.

Those names are well known but one who hasn’t gotten as much play is Tyus Battle. Battle is a top-10 player in the class and a Michigan priority. Battle is hearing from Michigan, Indiana, Syracuse, Ohio State, UConn, Villanova and a host of others. He wrote in his blog that he “plans on visiting Villanova, Michigan, Syracuse, at some point in 2013”. Battle is playing at The Peach Jam 16U tournament this weekend in Augusta.

Michigan has almost a year to go until class of 2016 offers are extended but the priorities in this group should start to become clearer by the end of July.