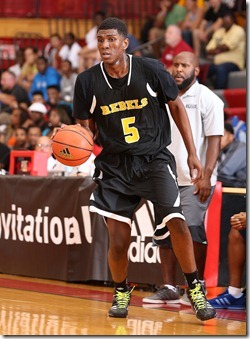 Come the end of this month, Michigan’s coaching staff hopes it makes the top five – earning a coveted official visit.

Looney has committed to trimming his long list of suitors to the final five by the end of July, but on Wednesday he was in action for the first day of the Adidas Invitational in Indianapolis. Looney’s Runnin’ Rebels faced off in a high-profile matchup against the New Orleans Elite on the main court at North Central High School.

Michigan assistant coach Jeff Meyer was watching along with Thad Matta, Tom Izzo, Rick Pitino, Mike Krzyzewski and a host of other coaches.

Both teams looked fatigued, as they were playing late in the day and most had arrived in Indianapolis earlier that same day. Looney himself had trouble getting anything going, but the stretch four still managed to hit some shots from long range and even notched a four-point play. Matched up against fellow top-25 forward Craig Victor, Looney scored 11 points and played almost the entire game — which ended as a loss for the Runnin’ Rebels.

“I played okay today. The matchup, that was my third time playing with (Victor), so we knew each other pretty well,” Looney said after the game. “Neither of us played a terrific game, but I think I played good. Just coming off a road trip, so it was tough for the first day. But I’ll play better tomorrow.”

While the overall energy level of the game was low, Looney showed off part of what makes him so dangerous: his versatility. Looney hit a number of shots from deep, but was also able to grab rebounds in the loss and was one of the taller players on the court.

It’s exactly that ability to single-handedly stretch the floor that has John Beilein so excited about him. Looney, who just started allowing college coaches to contact him directly, said he hears from Beilein quite often.

“Beilein will send a text or he’ll call, a couple times a week,” Looney said. “I talked to him right before he went to Russia. So I’ve stayed in good contact with them.”

Michigan is among a who’s who of college basketball’s best programs vying for Looney.  Florida, Duke, Michigan State, Wisconsin, Tennessee, Georgetown and Stanford are some of the others that stand out on Looney’s list.

That list, he said, will be cut to five by the end of the month. Those will be the five schools he will then visit officially. As far as Michigan’s chances of making the top five, Looney was mum.

“I’m not sure,” he said with a smile. “I’ve got to sit down with my parents and talk about that.”

Sedrick Barefield still not sure when he’ll visit

Kevon Looney wasn’t Michigan’s only high-profile prospect in action on Wednesday. Sedrick Barefield, one of Michigan’s top point guard targets in the class of 2015, took his Compton Magic Select squad across the country to Northview Middle School to take on Memphis Pure Magic Elite.

While Barefield struggled early, he was impressive late. The 6-foot-2 point guard is lightening quick and has excellent vision — his shot wasn’t falling, so he concentrated on finding his teammates for open looks. He also showed off an ability to finish strong in traffic against post players.

It wasn’t Barefield’s best game — he scored 11 points — but his team won handily and it’s obvious how talented he is. These skills have Michigan looking to Barefield as next in line in its traditional bi-annual point guard signing.

There’s only one problem — he hasn’t received an offer yet.

“(John Beilein) said basically if I get out to visit, I’ll have an offer waiting for me,” Barefield said after his game on Wednesday. That’s not surprising, given how high Michigan’s coaches are on Barefield and Beilein’s policy of not offering a player until he’s taken a visit to Ann Arbor.

“The last coach I talked to was coach Beilein,” Barefield added. “He was talking about the season they had, the season I had and how much I been improving.”

The Barefields would like to visit but coming from California, it’s not always easy. Barefield said he hopes to visit “soon.” That visit will probably have to come in August or in the fall as a hectic travel basketball schedule picks up in July.

Class of 2015 wing Tyler Williams has been on the Michigan radar for a while. The Texas native watched Michigan beat Michigan State at the Big House this past football season and has kept in contact with the Wolverines. While updates from Williams have been scarce since then, it’s clear his recruitment hasn’t slowed down in the least.

“I talk to coach Alexander probably on an every-other-day basis. So me and him are pretty close,” Williams said after his game on Wednesday. “I like to keep in touch, and I look forward to what happens in the future.”

Williams holds offers from Texas A&M, Houston, Iowa State, and SMU, but he’s receiving interest from many other top schools. He was impressive as his Urban DFW squad took on Team Loaded Virginia, scoring 17 points. Williams played an all-around game, getting after rebounds, finishing strong in the post and also running the floor.

The 6-foot-5 swingman is eyeing a return trip to Ann Arbor this fall.

Stay tuned to UM Hoops throughout the week for additional coverage from the Adidas Invitational in Indianapolis.