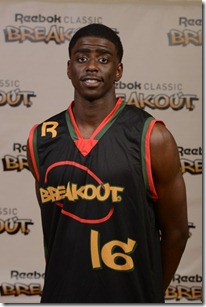 17U play tipped off on Thursday and LaVall Jordan was on the scene in Augusta tracking some of Michigan’s top targets including Trevon Bluiett, Jordan Barnett, Vince Edwards and Jalen Brunson.

Bluiett and Barnett went head to head on Thursday morning to open the event. Bluiett’s Spiece Indy Heat team entered the tournament with a depleted roster after JaQuan Lyle left the team before the tournament. Bluiett tallied 20 points in an 18 point loss to the St. Louis Eagles, going 4-of-15 (1-6 3pt) from the field but knocking down 11-of-14 free throws. Spiece played just six players in the game. Barnett had 18 points on 6-of-11 (1-4 3pt) shooting for the Eagles iwth four rebounds, two assists and a steal in 21 minutes.

16U play began on Tuesday at Peach Jam and Luke Kennard has been playing well with his King James Shooting Stars. King James is 2-1 at the event and their game this afternoon (3 p.m.) against Team Final wil determine whether they advance to Friday’s quarterfinals. That match-up will pit Kennard against 2016 phenom Tyus Battle (who we discussed here).

Kennard impressed a host of different scouts at the event. Future 150:

The smooth lefty never plays out-of-control on offense, and that was exactly what we saw of him tonight. The 6-foot-5 shooting guard had a tough time shooting the ball, but showed good ball-handling skills and slashing ability going to the basket. Intense defense was also something we enjoyed seeing from the #22 prospect in the current 2015 rankings.

Wouldn't shock me if Luke Kennard's recruitment went to the next level with the national powers. Kid is fun to watch.

2015 SG Luke Kennard out of OH is super fundamental with a high skill level. Has a good feel and pace to his game. Smooth lefty #PeachJam

Mike Krzyzewski made the trip down to Augusta from Indianapolis to watch Kennard face Battle and Kennard is picking up where he left off.

Luke Kennard is a very crafty player. Makes smart decisions with the ball looks to run and finish and also make extra pass in the halfcourt

With Luke Kennard and VJ King struggling in their final game of the night, it was 2015 5-foot-9 point guard A.J. Harris who stepped up for King James Shooting Stars (OH). Despite his size, Harris put on quite a display by draining threes, getting to the bucket and doing his best Allen Iverson impersonation to keep his team in the game. His size may limit his recruitment somewhat, but he is considered the top point guard in the state of Ohio for his class.

He is being targeted by Dayton, Illinois, Xavier, Ohio State, Michigan, Cincinnati and some mid-major schools, who may not be able to get him if he continues to play big in games like these.

Bacon tallied nine points on 3-of-7 shooting with two assists and two rebounds in the camp-format event.

Finally, some other players making waves on the first night were 2015 point guard Corey Sanders, 2015 wing C.J. Keyser and senior-to-be Johnnie Vassar. A top 100 player, Sanders is a big-time athlete with serious explosion around the rim and he’s capable of making plays off the dribble.

One of the most electric players in the camp, Sanders lived up to his reputation. He was a blur with the ball in his hands and no one was able to stay in front of him. Sanders also showed off his quick hands, as he came away with a couple of steals.

Michigan targets Diamond Stone and Evan Boudreaux were in action at the NY2LA event in Milwaukee. Stone had 17 points in a opening night win and continued his impressive summer.