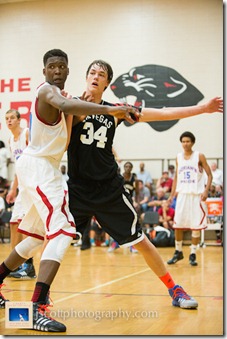 INDIANAPOLIS – At eight o’clock in the morning on Thursday, Stephen Zimmerman and his Dream Vision squad took the court in the auxiliary gym at North Central High School. Armed with coffee cups and notebooks, the best college coaches in the business surrounded the court in folding chairs, hoping to catch a glimpse of the rising senior from Las Vegas.

Who cares about sleep when you’re dealing with a talent like Zimmerman?

In what has become routine over the past year, the 6-foot-11 center was playing in front of some of the best college basketball coaches in the game. And he likes it that way.

“It just gets me more excited and wanting to play,” Zimmerman said, speaking to reporters after the game. “I already want to play 100 percent but, you know, I just want to put on a show.”

His early game was a relatively uneventful victory marked with mistakes anyone could expect from two teams playing so early in the morning – an 8 a.m. tip off in Indianapolis is more like a 5 a.m. tip off for Las Vegas based Dream Vision. But during his afternoon game against Dorian’s Pride, Zimmerman showed flashes of why he’s one of top-five players in the country.

No big man runs the floor like the lanky star, and when he gets the ball on a fast break, the best thing to do is get out of his way. While Zimmerman faces constant double-and-triple-teams in the post, he has a reliable jumpshot that can open up his offense.

With all of this talent, his coaches have one big portion of his game he still needs to improve: aggressiveness. And with his teammates’ help, he’s getting there.

“Being aggressive. That’s probably my main thing. That’s been a big downfall in my game lately, so I need to be more aggressive,” Zimmerman said. “I try to do it myself, but teammates help me out and stuff. They try to get my hype and stuff like that. I look to my teammates a lot.”

Michigan, of course, is on Zimmerman’s long list of schools. The only reason he doesn’t have an offer yet from the Wolverines is because he hasn’t visited campus. Still, the Michigan coaching staff makes it known they want the 6-foot-11 shot-blocker.

“(Michigan) has been talking to me a lot. They’re a great school,” Zimmerman said. “They want me to go out there and see the campus and stuff. I’m not sure on an exact date yet.”

Zimmerman has no visit dates planned, but he’s hearing from coaches almost constantly. He had a succinct way of describing the contact he’s had with all the college coaches who woke up so early to watch him play on Thursday:

Zimmerman may have been the headliner in Dream Vision’s afternoon contest against Dorian’s Pride, but Ypsilanti native and top-100 2014 prospect Jaylen Johnson did his best to steal the show, and the victory, from the Vegas native.

Johnson was extremely active and routinely took Zimmerman inside, fiercely challenging him in the post and winning more than a few under-the-basket battles. The 6-foot-8 forward gave up a few inches to Zimmerman, but you wouldn’t have known it the way he was getting to the rim.

Johnson said he knew exactly what he was doing — and what was at stake.

“If I know you’re good, I’m going to try to be better and invested in everything. I think I was more invested today,” Johnson said after the game. “(Zimmerman) had some plays when I was out that picked up the momentum but usually when I play against better players I play harder.”

The talented big man said he hears from Michigan “all the time,” but the Wolverines have not offered.

AJ Turner, formerly of De La Salle High School in Warren, was in action alongside Johnson for Dorian’s Pride. Turner recently reclassified from the class of 2014 to 2015, transferring to New Hampton School in the process. Turner said the reaction to his decision from college coaches has been positive.

“Since I reclassified, Syracuse and Florida have definitely picked up their interest. I’ve been talking to Boston College since I reclassified,” Turner said. “They think it’s a good move, because it gets me another year to get stronger and get ready for college. I still talk to Michigan, coach Beilein and coach Bacari.”

Focusing on improving his strength and quickness, Turner said he’s hearing from Michigan “every couple of weeks.”

The two enticing teammates certainly differ in demeanor. While Turner is modest and somewhat unassuming, Johnson has no trouble speaking his mind. When considering a school, he wasn’t shy about articulating his end game — and what he considers his ceiling.

“I mean, I just want to go to the next level and be developed so I can do well in the League,” Johnson said. “Like, I can be the next LeBron, the next Kobe.”

After his Indiana Elite team notched a victory early in the day, 2015 wing target updated his recruitment as it stands at this point in the summer.

Coleman’s primary recruiter from Michigan is assistant coach LaVall Jordan. Given the recent uncertainty about whether or not Jordan would be offered the head coaching job at Butler vacated by Brad Stevens, Coleman was relieved to find out Jordan would be staying on with the Wolverines and has continued to keep in contact with the coaching staff.

“I was hearing rumors about him going to Butler and things like that,” Coleman said after his game on Thursday. “Coach Beilein also texts me a lot, so it’s good.”

Coleman scored 24 points in a win over Florida Elite.

Notes: CJ Lee was in Indianapolis recruiting for Michigan on Thursday. The Wolverines are allowed an extra recruiting assistant due to John Beilein’s obligations outside of the country for the World University Games. Sedrick Barefield bounced back on Thursday after a lackluster opening night, helping his Compton Magic Select team to a 60-point win and a 36-point win.