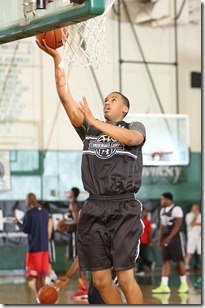 Much was made of what effect Butler’s decision to hire Brandon Miller would have on Trevon Bluiett’s recruitment and the 6-foot-6 wing finally addressed the situation in an interview at Peach Jam.

“They were both calling me (during that time),” said Bluiett. “If coach LaVall had got the job, that would have been good for him, he’s one of the best recruiters in the country. Either way it went, Butler would have been set for success.”

So now that the dust is settled?

“Since he gets the hire, nothing changes with Butler,” said Bluiett. “I have known him for four years and we have a good relationship. Probably a better one that I have with Stevens, so that is always a plus.

On the court, Bluiett led an admirable comeback effort to lead Spiece Indy Heat to a comeback victory. Bluiett had 22 points on 8-of-18 (3-9 3pt) shooting with three assists in 31 minutes including a burst in the second half where he scored eight straight points. (Photo: Kelly Kline/Under Armour)

Jordan Barnett has helped the St. Louis Eagles to a 2-0 record at Peach Jam thus far, adding a 18 point (4-of-9 shooting), four rebound performance on Thursday evening. Vince Edwards and All Ohio Red are 0-2 but Edwards had a 10 point, 10 rebound double double on Thursday.

More after the jump including a top four for Kennard along with notes on Devin Booker, Dwayne Bacon, Corey Sanders and others.

Luke Kennard is drawing big crowds at the Peach Jam as Roy Williams, Thad Matta, Mike Krzyzewski and Tom Izzo were all in the bleachers yesterday. After the game, Kennard reported that he has a top four, according to the Fayetteville Observer:

Kennard said Duke, Michigan, North Carolina and Ohio State are in his top four. Florida, Kentucky, Louisville and Indiana are also very much in the mix.

“They said they were going to stay in touch and start the process right now,” Kennard said.

It was the first time Williams got a chance to see Kennard play in person. He tried to watch him at an event earlier this year, but the game ended up being a forfeit.

“Hopefully the other team shows up this time so I don’t have to watch you guys warm up,” Kennard said that Williams told him in a phone call a few days ago.

King James will play in the Peach Jam 16U quarterfinals this afternoon (1:30 p.m.) against Nike Team Florida.

Bacon, Sanders stand out at Reebok

Corey Sanders athleticism has never been questioned by scouts but he continued to impress with big dunks like this one at Reebok’s showcase event in Philadelphia.

Sanders drew praise from 247sports’ Jerry Meyer. Sanders reported to Meyer that Mcihgian is recruiting him the hardest.

A dynamic 2015 6-0 point guard, Sanders plays for the same travel team as Shane Larkin played for. Those are big shoes to fill, but Sanders does have a game reminiscent of Larkin’s.

Sanders is explosive to the rim and has strength and quickness on defense. Exactly what kind of shooter he is isn’t quite clear.

He currently holds offers from Memphis, Marquette, Murray State, Georgia Southern and UCF. However, Michigan, who hasn’t offered yet, is recruiting Sanders the hardest.

“Michigan is recruiting me the hardest,” Sanders told 247Sports. “They want me to visit. I really like them, the school, the staff. I’m in contact with the coaches and Coach Beilein a lot. They have been on me since day one.”

Louisville is also pressing Sanders to visit while Oklahoma State, Georgia and Miami are showing interest as well.

Sanders went for 16 points on 7-of-10 (1-2 3pt) shooting with four assists and seven rebounds in a Thursday night loss.

Dwayne Bacon also found his groove on day two of the event. Bacon had a big game on Thursday afternoon, scoring 21 points on 9-of-21 (3-6 3pt) shooting with four assists, seven rebounds and a steal in a 76-64 victory. The performance drew praise from Rivals.com and Bacon announced that he’ll be attending IMG Academy next season:

Recently, class of 2015 wing Dwayne Bacon settled on a transfer to Bradenton (Fla.) IMG Academy for his junior season. With that out of the way, the 6-foot-6 four-star can concentrate on balling, and he was definitely showing flashes Thursday morning. A controlled player, Bacon is strong with the dribble and came to life with a big-time baseline drive and three-pointer when his team needed it most. Far from chopping down his college list or making a decision, Bacon claims offers from the likes of Florida State, UCF, South Florida, Virginia Tech, Old Dominion, Georgia Southern, Baylor, Marquette, Memphis, Xavier, Clemson, DePaul, Oklahoma State, USC, Louisville and Miami.

Booker still drawing attention out of the spotlight

Devin Booker has played in just about every high profile grassroots event this summer but this weekend he’s been a bit more off of the beaten path. Because his Alabama Challenge EYBL team didn’t qualify for the Peach Jam, they are playing in the Elite Youth Invitational, down the road from Peach Jam in Augusta.

While the event lacks some of the star power of other events this weekend, plenty of coaches made the trip over from Peach Jam to check in on priority targets. Tom Izzo and John Calipari were both spotted at the event and almost certainly checked in on Booker.

On Friday morning, Booker’s Alabama Challenge team faced off against another Michigan target: 2015 big man Noah Dickerson. Dickerson’s team got the best of Booker, advancing with a 70-67 victory and Dickerson tallied 26 points to Booker’s 17.

Boudreaux, Stone impressive at Next Level

Evan Boudreaux and Diamond Stone both drew rave reviews at the NY2LA Next Level Invitational.

Evan Boudreaux — 2015 — F — Team NLP JF 6-7 — Lake Forest H.S. — Lake Forest, IL Boudreaux had a solid outing rebounding, scoring and defending in a sometimes choppy win over Kingdom Hoops. In games like that when there’s no consistent tempo, having players like Boudreaux is a nice luxury because he can do the dirty work inside or show a bit of his skill and knock in jumpers.

Diamond Stone — 2015 — C — Young Legends 6-10 — Whitefish Bay Dominican — Wauwatosa, WI The elite 2015 big man looks to be in better shape since the spring and it showed in his explosiveness on both ends of the floor. Stone finished dunks with more ease and was especially improved as a shot blocker. Stone finished with 17 points in a Young Legends win and also controlled the glass and showed some skill as a passer.