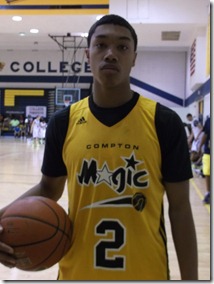 INDIANAPOLIS — During the first 10 minutes of the Compton Magic’s only game of the day on Friday, nothing went right for Sedrick Barefield. He turned the ball over, played tentatively and his shot wasn’t falling. His coach, AJ Diggs, took him and some of his teammates out of the game and urged them, somewhat colorfully, to pick up their play.

Barefield took his advice to heart. The 6-foot-2 point guard was a different player when he got back in the game, shaking defenders, finding his teammates for alley-oops and scoring at will.

“I just had to kind of get in a zone,” Barefield said after the game on Friday. “I wasn’t focused, I came out sort of lackadaisical and just my mindset wasn’t right. I had to adjust myself. I came out when coach took me out and I played better.”

He didn’t just play better — he had arguably his best game of the tournament. Barefield finished with 21 points but was responsible for far more, creating opportunities for his teammates on the fast break. His handle was on full display as he embarrassed his defender at the free throw line with a devastating crossover and hit an easy jumper in the second half.

Simply put, Barefield justified the formidable hype surrounding his game. And he did it in front of Michigan assistant coach LaVall Jordan, along with a slew of other coaches from around the country.

For Barefield, the challenge is staying focused on the game with all the expectations surrounding him.

“It makes you kind of nervous at first, but once you start playing in front of [college coaches], you get used to it and you don’t even notice them,” Barefield said. “The main objective is to win and not focus on impressing them. Because they like winning.”

The Magic won this game by almost 30 points after being up just five at halftime, thanks largely to the performance of its star lead guard, who’s looking more and more like a pure point guard, as opposed to a combo guard, every game. It’s something Barefield has been working on all summer.

“Me and my dad talk about it a lot,” Barefield said. “Just being a true point guard — not just looking for my shot, but being an all-around player.”

Of the players Michigan is recruiting in the class of 2016, Derryck Thornton Jr. may be among the most accomplished.

Playing with Dream Vision, Thornton has spent his entire summer playing with the 17U team, a full two age brackets above his own. And he hasn’t just played with the big boys — he’s thrived against them.

Thornton is a 6-foot-2 point guard with a developed skill set for his age. Along with  great handle and vision, Thornton has developed his jumpshot to the point where it’s one of his most reliable weapons. The result is a versatile game that makes him dangerous from anywhere on the floor.

The little things were his specialty when he plays with the likes of Stephen Zimmerman with Dream Vision 17U. On that team, there are plenty of talented players who can carry the offensive load.

But this week, Thornton has been playing with 16U, and he’s still acclimating himself to being more of a focal point of the offense. However, his main focus is still on facilitating for his teammates.

“I’m making sure I’m just playing as much as I can and helping my guys win and help my guys get some scholarship offers,” Thornton said. “I’m trying to help everybody else out.”

As far as his own offers, Thornton needn’t worry. He has already been offered by nearly the entire Pac-12, and is receiving interest from Kentucky, Kansas, Florida State and Michigan.

Thornton wasn’t the only impressive 2016 recruit playing on Friday. Another was Justin Jackson, a physically gifted swingman from East York, Ontario. Jackson’s YAAACE Elite team dominated its morning game to the extent that Jackson sat for much of the contest. Still, his impact — and incredible raw ability — was undeniable.

Already standing at 6-foot-7, Jackson has a wiry frame and an incredibly long reach. He’s also shockingly versatile, often bringing the ball up and playing the role of distributor for his team.

“I sort of think of myself as a point forward,” Jackson said. “I can dribble, I can shoot, but my main ability is my passing. That’s what a lot of people say: that I have good vision.”

Jackson is currently looking at prep schools for the fall, and they are already lining up to vie for his services. But colleges have already started to do the same — while coaches can’t contact Jackson directly until next June, Michigan, Ohio State, Wake Forest and Baylor are among those that are interested.