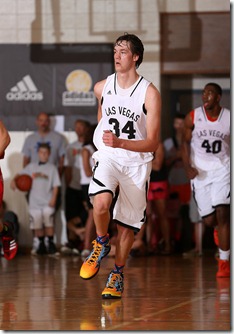 Throughout the development of Stephen Zimmerman, the No.1 player in the class of 2015 according to Scout.com, the seven-footer has gone up against some of the stiffest competition in the country.

The Las Vegas native may be seven feet tall, but has been traditionally undersized as far as bulk. As a result, he was forced to learn how to play well against players who were able to push him around at times.

“Throughout the years, Zimmerman has been playing with and against players such as Anthony Bennett, Shabazz Muhammad, Winston Shepard, Robert Upshaw,” Dream Vision coach Clayton Williams said after a game on Saturday. “He’s never had the strength to really compete with them physically, so his game developed. He’s a little savvy, he built a very good skill set, and that’s how he got by.”

That, however, is changing.

Zimmerman is still quite thin at only 220 pounds, but he has devised a way to make up for his lack of size by improving his aggressiveness around the rim. It has been a focus of his all through the last year and a half, and something he feels is still not quite there.

“(Being more aggressive) is probably my main thing,” Zimmerman said. “That’s been a big downfall in my game lately, so I need to be more aggressive.”

In Indianapolis, it was clear that was his goal. Zimmerman attacked the hoop and ran the floor with abandon on fast breaks, fearlessly drawing contact consistently. Being ranked so high, it’s truly his time to dictate the action on the floor, and he’s taking full advantage.

Williams, for one, has been impressed with Zimmerman’s aggressiveness to this point.

“He attacks the basket, he’s not scared. He’ll finish over you, he’ll go through you, he’s come a long way in that,” Williams said. “By nature, he’s a physical guy, he’s just a little thin right now. As he fills out, he’ll get better.”

While Zimmerman spent a lot of time at the top of the key in Dream Vision’s offensive sets, he ran the pick-and-roll well, even if he had trouble finishing at times. It was clear opposing big men knew exactly who they were facing and targeted him, at times playing with a little extra physicality — one play when Zimmerman was positively decked on a fast break on Saturday was a good example.

But Zimmerman simply shrugged it off, got up and walked to the free throw line.

The way he handles incidents like that mirrors the low-key attitude he has about his recruitment. There’s always a scrum of reporters waiting for him after every game, but he answers questions patiently. Yes, he will pare down his list but no, it won’t be this summer; yes, he has talked to (name of school), but he’s been talking to (every other school) as well; yes, it’s a blessing to have so much interest but yes, all the coaches watching every game can be nerve-wracking at times.

Speaking of which,  steady dose of Maize was present at nearly every one of Zimmerman’s games. The young center said he has been in contact with the Wolverines and plans to make a trip to Ann Arbor.

“They’ve been talking to me a lot. They’re a great school,” Zimmerman said. “They want me to go out there and see the campus and stuff. I’m not sure on an exact date yet.”

But Zimmerman is in no hurry to rush the recruiting process. He doesn’t have visits scheduled to any school and is more focused on enjoying the summer travel season.

“[I won’t trim my list] this summer,” Zimmerman said. “Probably once the school season starts I’ll be more into it. But right now I’m just trying to get better and have fun.”

While Stephen Zimmerman and Mitch McGary are very different players, Michigan’s recruiting pitch has revolved around McGary blossoming in the Wolverine offense. Although McGary has never had a shortage of aggressiveness, Zimmerman’s versatile skill-set makes him an intriguing fit for the Michigan offense. Zimmerman can get up and down the floor, finish at the rim and even step out and knock down jumpers.

Williams sees Zimmerman’s skill set as particularly useful for Michigan in the pick-and-roll.

“He could do multiple things. He’s an asset,” Williams said. “I’ve watched Michigan basketball and the way they open up. I think he’d play great. I think he’d fit in great there or any place. … He can pick and pop, or he can pick and finish. And he’s a 7-footer with a 7-6 armspan. So, it speaks for itself.”