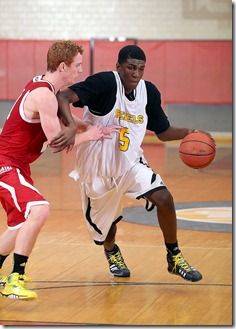 At 6-foot-9 and with an incredible wingspan, top-10 2014 prospect Kevon Looney is a matchup nightmare for any team. He seems to fit the role of the modern day combo forward but his skill set is so versatile that it’s tough to pigeonhole him into just one position on the floor. He can shoot and drive like a wing, post up like a traditional four man and defend opposing fives

Given Looney’s flexibility, it’s fitting that his Milwaukee Runnin’ Rebels coach doesn’t believe in strict positions for his squad.

“Our team has a lot of freedom. Really, there’s no position,” Shelby Parrish, the coach of the Runnin’ Rebels, said after his team’s game on Saturday. “There’s a lot of motion stuff. Defensively, [Looney] guards the biggest person if we’re playing man.”

It’s the perfect system for a player with the combination of size and skill that Looney possesses, although that freedom sometimes allows Looney’s teammates to hog the halfcourt offensive opportunities. The talented swingman is left to his own devices on offense, according to the player matched up with him.

Considering the success Michigan experienced last season with two versatile options at the forward and center positions in Glenn Robinson III and Mitch McGary, it’s no surprise that they want to continue going after players with multi-faceted games. Looney certainly follows in that line.

The mutual interest comes from what Looney watched Michigan do during this past season — specifically, he saw the success Robinson experienced as a first-year player.

“I could be next,” Looney said. “When you see someone that’s built like you, has a style of play like you, and you see he’s going to get better, you sort of put yourself in that position.”

Looney knows what he’s looking for in a school.

He has all the physical tools. Parrish said he would like to see Looney improve his strength, though the forward has already put on a lot of weight in the past year. He also needs to be more confident in his jumpshot, which has improved but still needs work.

Watching Looney is a bit like being hypnotized. The game is so effortless for him and the ease of his movements are such that he fools you into an impression of complacency on his part. Then all of a sudden, he’s at the rim for an and-1. His moves are methodical instead of flashy, but they are effective mostly because of his size and the way he uses his length.

As far as those skills translating at Michigan, Parrish sees it as a no-brainer.

“He could play a stretch four, a three, he could play multiple positions for that team,” Parrish said. “They played some zone, Beilein likes to use the 1-3-1 some, so his length will help out with that. And it’s wide open — they play both ways; they get out, they get up and down, they use athleticism, and then they run sets. So at the three position there’s a lot of freedom.”

Looney maintains what he calls a “pretty good” relationship with Michigan’s coaching staff, saying John Beilein contacts him about twice a week.

One aspect of Looney’s recruitment that can’t be overlooked is the importance of retaining assistant coach LaVall Jordan, who was being strongly considered for the Butler head coaching job. Looney said Jordan is the coach he has the best relationship with and that he was glad to hear he was returning to the team.

“That’s big,” Looney said of Jordan returning. “He’s the assistant that’s been recruiting me, so I have probably the best relationship with him. That’s big.”

Looney hopes to narrow his list to five schools after July and take his five official visits before making a decision.