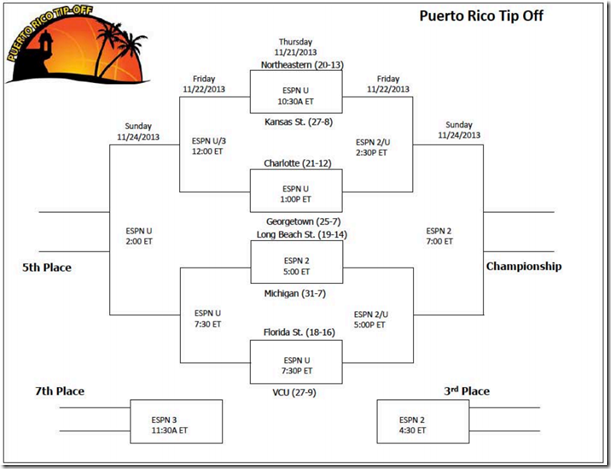 The Wolverines’ half of the bracket also features Florida State and VCU, leaving a Michigan-VCU NCAA tournament rematch as a likely possibility. Michigan beat the Rams 78-53 in a round of 32 last season en route to a National Championship game appearance but VCU’s aggressive full court pressure will be a stern test for young point guards Derrick Walton and Spike Albrecht.

The other half of the bracket features Northeastern against Georgetown and Charlotte against Kansas State. (updated)

Games will be played on November 21st, 22nd and 24th and will be broadcast by ESPN2, ESPNU, or ESPN3. Four of eight teams in this year’s Puerto Rico Tip Off reached the NCAA tournament last year, Georgetown, Kansas State, Michigan and VCU. Long Beach State finished 19-14 last season with a KenPom ranking of 178.

Four of ESPN’s five experts predict VCU as event favorite with only Andy Katz picking the Wolverines to win the tournament.

Find a full rundown of Michigan’s confirmed 2013-14 scheduling dates on our future schedules page. View the full 2013 bracket after the jump.