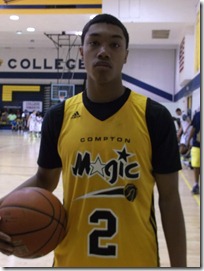 INDIANAPOLIS — On Friday night, during his best game of the tournament, Sedrick Barefield played like the high-level point guard recruit many see him as. By the end of the contest, he was putting the game away through every skill set available to him — his vision, his scoring ability, his body control, he dominated the game as it spiraled into a blowout..

But the game didn’t always go so swimmingly. It started slow, with Barefield and his teammates noticeably focused on individual play rather than concern for team success.

The game was an excellent microcosm of how right things go when Barefield is utilizing all aspects of his game — and how wrong they can go when his focus is solely on scoring. It isn’t selfishness that drives Barefield to force things — rather, it’s the pesky knowledge that he has the ability to take over a game, and the youth that blinds him at times to knowing when and when not to use it.

Becoming what he calls a “true point guard” has been Barefield’s focus all summer. Ever since attending Nike’s Elite 100 camp, during which he played alongside some of the most formidable offensive weapons in the country, the 6-foot-2 guard has endeavored to craft a better all-around game.

“When I went to Nike Elite 100 [camp], that’s when I realized that I had to be more of a true point guard,” Barefield said after the game on Friday. “I had a lot of guys on my team that could play and I wasn’t the only guy who could get off. My teammates were good — I was playing with Luke Kennard and some guys like that. I had to find them and get them going as well.”

His teammates on the Compton Magic aren’t slouches, either. But AJ Diggs, Barefield’s coach, said that it’s Barefield’s job to make them even better, and in doing so, Barefield will improve as well.

Barefield’s raw talent is obvious. He has a solid frame, a great handle and solid athleticism. He plays excellent defense and possesses the vision necessary to be a great point guard. He can shoot the ball well and his handle can be devastating.

According to Diggs, Barefield has a choice about where to go with his game. He’s made the decision to be a true point guard, and while he’s made impressive progress, it’s something he’s still working on.

“His growth has been unbelievable,” Diggs said. “For him, it’s just crazy because he has so much talent. He can do whatever he wants to do on the floor. But you got seven other guys who can also do whatever they want on the floor, so are you going to get everyone involved like you need to, or are you just going to go one-on-five because you know you’re better than everyone.”

Barefield faces this dilemma every time he steps on the court, and he’s still finding his way through it. Sometimes he completely gets it, as he did Friday, and sometimes it’s harder to grasp.

Through it all, Barefield keeps his cool and listens attentively to his coaches. His coach knows that for a young point guard, the shift in priorities is largely mental.

“For any good point guard, you have to enjoy the assist more than you enjoy the ball going in the basket. You have to enjoy the team getting press clippings over you getting press clippings. When you’re 15, 16 years old, that’s difficult,” Diggs said. “He just has to continue to embrace it. It’s not going to be easy. There will be ups and downs. You have to take the good with the bad. You can get blinded by success, or he can be buried by his failures. Those are his choices that he has to make.”

It’s easy to draw the comparisons between Barefield and Trey Burke. While Barefield is bigger than Burke, Burke had a similar ability to take over games — and a similar propensity, as a younger player, to turn to that option a little to quickly.

Michigan’s coaching staff followed Barefield throughout the weekend in Indianapolis and the Wolverines have prioritized the California guard. It appears as though Barefield is interested, as well. When asked if Michigan would be a school he considers going forward, he said they would be.

“I like them a lot,” Barefield added. “Final Four, national championship game, that’s a great program. What Trey Burke did with them was amazing. I like the coaching staff, they’re a great program.”

Barefield reported that Michigan coaches have an offer waiting for him in Ann Arbor and he hopes to work on scheduling a visit after the July AAU season wraps up.

For his part, Diggs could see Barefield thriving in Ann Arbor, especially given the success of Michigan point guards in the recent past.

“They’ve done a wonderful job of giving their point guards the keys at a young age, and I think that intrigues Sed,” Diggs said. “He’s seen the success, and not only in college but also the ability to put guys in the NBA. When you got Trey burke going nine, you got Darius Morris, who left a little early but got drafted, that’s intriguing to a point guard. How they play the floor spaced, spread, which allows you to showcase. I think Sed has a lot of Trey Burke in him — the ability to take over the game.

“I don’t know what he’s going to decide, but I know that he likes Michigan and I know that it’s a school that definitely intrigued him. I know his parents like it as well.”