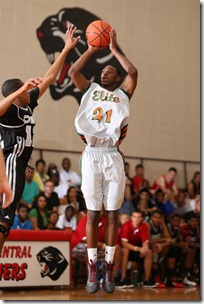 INDIANAPOLIS – Last summer, Jalen Coleman spent much of his AAU season playing up an age level with Spiece Indy Heat’s 16U squad. Coleman didn’t just play up a level, he was the focal point of that team and had a great summer on the AAU circuit.

This summer, Coleman is in different situation. The 6-foot-3 guard prospect is now a member of Indiana Elite and is playing with kids his own age. The adjustment means Coleman is also in a loaded backcourt with fellow high-major class of 2015 recruits Hyron Edwards and Chandler White.

The pairing of Edwards, who’s primarily a distributor, and Coleman, whose specialty is scoring, has proved to be a lethal combination. Any early growing pains from this spring have been ironed out and Indiana Elite went on to win the platinum bracket of the loaded 2013 Adidas Invitational. Indiana Elite 16U coach Bill Duany is impressed with both players’ chemistry.

“Hyron’s got great vision, he really finds guys, and Jalen’s a guy that benefits off of that,” Duany said. “A guy with great vision, it makes it a lot easier for him. Creating that shot, getting a bucket here and there on his own, it takes its toll during the course of a game. But to be able to get easy shots off a guy like Hyron, it’s great.”

Coleman’s ability to score in bunches is the main reason his recruitment has been picking up throughout the summer. The Indianapolis native has a versatile offensive game — he can drive to the basket, he can shoot the lights out and he can even post up smaller guards. Coleman’s game is centered around simply getting buckets.

He has been doing so with such regularity that the majority of the Big Ten is now after his services. Two schools who have been recruiting the talented wing hardest are Michigan and Purdue, while Coleman has also been hearing from Indiana, where he occasionally drops by for open gym.

“I recently came back from playing [at Indiana] with their new guys, the incoming freshmen,” Coleman said of playing with the Hoosiers. “It’s a good fit for them. Most of them are one, maybe two and done. So I had a good feel.”

As with any recruitment, different schools have different strengths. Coleman’s father is great friends with Purdue associate head coach Jack Owens. Michigan State has been a constant presence in Coleman’s recruitment and UCLA just extended a scholarship offer after watching him in Indianapolis.

For Michigan, LaVall Jordan has handled Coleman’s recruitment. The major strength for the Wolverines is that Jordan will be returning to the program after interviewing for the Butler head coaching gig following Brad Stevens’ departure.

“I was hearing rumors about him going to Butler and things like that,” Coleman said of Jordan. “Coach Beilein also texts me a lot, so it’s good.”

For now, Coleman is just working on improving. He’s seen as primarily a scorer, and while he does that very well he is currently trying to expand his game and become a better all-around player.

One of the areas where his coach has seen the most improvement is in his passing and facilitating for his teammates.

“I’ve noticed an improvement in his passing, his vision,” Duany said. “I think he’s really taken a lot from playing with a really good team. He’s growing. He’s obviously a really good scorer. What I’m seeing on a day-to-day basis is him getting other guys shots. He’s not taking too many shots because he doesn’t feel like he has to. He can get someone a really good shot just like he knows someone can get him a good shot next time down the floor.”

Coleman’s transition to a different setting this summer mirrors what he will eventually be doing in the fall — transferring schools. Coleman left Cathedral Prep this year and will now be playing at La Lumiere High School.

Coleman said the transition will be helpful in deciding if he’s okay with living far away at college, as La Lumiere is about two and a half hours from home.

“It’s gonna show me, as far as in college, if I’m going to want to go distance, or if I want to stay somewhere close,” Coleman said. “I’ll get a better feel for college and being able to be prepared and staying focused in that environment.”