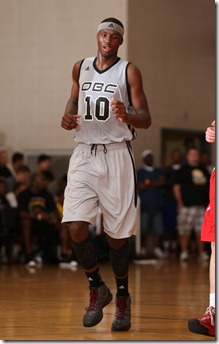 Michigan coaches spent time tracking a handful of players that are very familiar to Michigan fans at the Adidas Invitational. The Wolverines were present at almost every game that Jalen Coleman, Stephen Zimmerman, Sedrick Barefield and Kevon Looney played in Indianapolis, but there were also some fresh faces that emerged as Wolverine targets over the weekend.

While I only watched Carlton Bragg play in one game in Indianapolis, that’s all the time I needed to recognize him as one of the country’s top big man talents in the class of 2015. Bragg is hyper-athletic, has great hands and his rebounding instincts are excellent. The Cleveland native is the No. 10 player in his class, according to 247Sports’ composite rankings.

Bragg has been receiving interest from all over, including Kentucky, Indiana, Ohio State, Illinois and Michigan — he already holds offers from the Buckeyes, Illini and Hoosiers along with a new offer from Georgetown.

As far as contact with Michigan, Bragg said he talks with the coaching staff a few times per month, and he’s been hearing from them consistently throughout the summer.

“They contacted me last week, I was talking to an assistant coach,” Bragg said after his game on Saturday, a victory for his Ohio Basketball Club. “They want to get to know me as a person more than as a player.”

Bragg is looking to take a few visits later in the summer, expressing hopes to get to Indiana and Kentucky, as well as Michigan.

“We’re going to take a visit down there (to Michigan) this fall,” Bragg said. “I’m trying to hopefully get everywhere. Kentucky, Indiana, Michigan, I’m trying to go to Texas, trying to get around.”

As far as a potential offer from the Wolverines, Bragg said the coaching staff has told him they would like to see him on campus before offering. It’s unclear if there’s an offer waiting for him in Ann Arbor, but with Bragg’s talent and close proximity, it’s a safe bet the coaching staff will be watching him closely in July.

Another forward whom Michigan is tracking closely, but who has flown significantly lower under the radar, is rising senior forward Mac Mercer. Mercer recently joined the Eric Gordon All-Stars alongside former Michigan targets Sean Sellers and Bryant McIntosh and has thrived in his new setting.

The Plymouth, IN native has put on a significant amount of muscle since the high school season ended and has shown an ability to bang in the post as a result — known as a scorer, it’s important for Mercer to prove he can play solid defense and rebound at a high level. Michigan has been showing interest, and Mercer listed them as one of the schools contacting him the most recently, along with Northwestern, Belmont, Purdue and Indiana State.

“I speak with (Michigan) probably 2-3 times a week,” Mercer said. “Coach Beilein has been texting me, along with coach Meyer, coach Meyer is the main assistant who’s been recruiting me. Seems like they’re really great people.

“They really want to see me play in July, watch me play defense and rebound, just watch me play a complete game and go from there.”

Mercer was at Michigan’s College Practice Camp and played well. Mercer shot the ball well, but more importantly he showed he can play physical in the post and rebound the ball well. He’s still figuring out how to use his new bulk, but he seems to be coming along nicely.

“I’ve been working on my lateral quickness, jumping, my hands, because I’ve got to be able to play a complete game if I’m going to play at the next level,” Mercer said. “I feel like I’m coming along pretty well.”

Mercer plans to take an unofficial visit to Ann Arbor in August.

Playing for the Michigan Mustangs 16U squad, Miles Bridges showed off a versatile game, able to take opponents off the dribble as well as go to work in the post. With a long frame and solidly built for his age, Bridges had not trouble finishing through traffic inside.

After an impressive showing at the Izzo Shootout team camp in East Lansing last month, Bridges has been hearing from area schools, including Michigan State, Michigan and Detroit. The Flint native has already picked up an offer from Oakland, as well.

At this early stage in the process, Bridges is focused on cultivating his all-around game.

“Trying to work on my post moves, my shot, driving to the basket, passing, rebounding,” Bridges said after a win on Thursday. “That’s pretty much what I’m focused on.”

Bridges is looking for a school with a supportive team and good coaching, and he said for him, Michigan fits that bill.

“Great coaching, teammates that will cheer you on even if you do bad, they’ll still tell you to pick your head up and stuff,” Bridges said. “I like (Michigan’s) coaching staff. They’re a good organization. I like the plays they run, I like the way their coach coaches them.”

Bridges said he went to a football game at Michigan last fall and will likely be in Ann Arbor again after this summer. Bridges also told reporters that Indiana and Kansas are his “dream schools”.