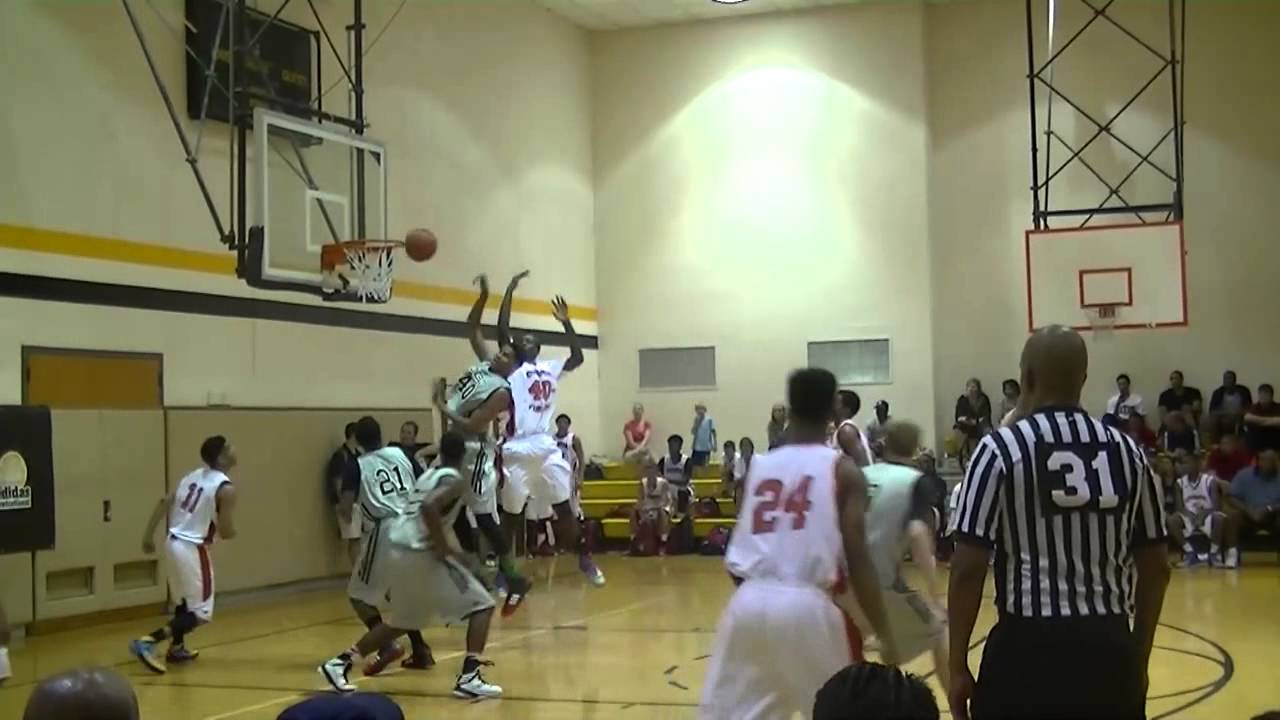 With an unassuming build — 6-foot-2 and rail thin — elite 2016 point guard prospect Derryck Thornton isn’t exactly physically imposing. During warm-ups, it’s difficult to immediately pick out the player among the rest of the Dream Vision 16U squad who’s being recruited by the likes of Kentucky, Kansas, and Arizona.

And then the ball is tipped, and it becomes obvious. Thornton, as he said on Saturday, has indeed been “playing up” his whole life.

At just over 16 years old, his stint with the 16U team over the weekend at the Adidas Invitational was the first time all summer that Thornton was playing against kids his own age. Over the AAU circuit this season, the Henderson, NV native has been playing alongside super-recruit Stephen Zimmerman with the Dream Vision 17U team.

As a result, Thornton finds himself still figuring out how to play with his new teammates. It was apparent the team was still working out some kinks, chemistry-wise, but Thornton’s AAU coach Michael Cage said he’s doing what he can to make sure the players feel comfortable around each other.

“We do family settings like tonight, we’re going to have dinner, and then we’re going to the movies, then we’ll be at the hotel together,” Cage said after a Friday night game. “Everyone can just sort of talk, get to know one another, we all come from different walks of life.”

That sort of team-building off the court is no doubt productive, but as a point guard Thornton is doing his best to facilitate on-court chemistry. The young point guard possesses excellent vision and anticipatory skills, and is used to looking for opportunities for his teammates.

Essentially, he sees it as his job to make his teammates look good.

“I’m making sure I’m just playing as much as I can and helping my guys win and help my guys get some scholarship offers,” Thornton said. “I’m trying to help everybody else out.”

However, while that may have been his main objective playing with the 17U team, Thornton now must look for his own opportunities more often. With his ability, seeking out his own shots and becoming more of a scorer is now essential to his younger team’s success.

Thornton is extremely quick, with impeccable handle. He is also fearless driving to the hoop, drawing high praise from his coach, who says Thornton reminds him of another athletic, manic point guard.

With an improving jumper and experience playing at Team USA camp, Thornton has drawn interest from some of the top schools in the nation. He said the entire Pac-12 was recruiting him, along with basketball bluebloods Kentucky and Kansas.

Michigan has gotten in on the race to secure Thornton’s services, even if it does seem to throw off their pattern of offering a point guard every other year. With a few different point guards on the radar for 2015, it may seem strange to see the Wolverines going after a player in the 2016 class — but Thornton is simply too appealing a talent to pass on.

Thornton said he has had consistent contact with Michigan, saying his dad and some of his coaches have been talking with the coaching staff.

“I like how Michigan plays. I like how they run,” Thornton said. “(The NCAA tournament run) was very exciting. I feel like I could fit in that system. … I think Michigan will always stay in the loop.”

The lead guard said he didn’t have any visits lined up just yet. However, the way he described what he was looking for in a program seemed to line up closely with what he watched Trey Burke do at Michigan over the past year.

“Just like a school that lets me handle the ball and make decisions for our team and be like a coach on the floor,” Thornton said of what he’d prefer in a school. “A coach that trusts me and lets me do what I do best.”