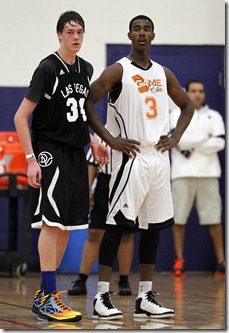 It must be difficult to take the court as a top-level recruit because of the hype and pomp that constantly surrounds your presence. When Stephen Zimmerman was playing in games, other teams would congregate around the court and say things about him, often commenting on his game. Sometimes a player would simply inform his teammates: “That’s Stephen Zimmerman.” And if there was a break in the action, Zimmerman would look over, hearing his name.

Because of his high ranking (No.1 in the country by Scout.com, No. 3 in the class of 2015 according to 247 composite rankings), Zimmerman’s game will be more closely picked apart and scrutinized than others. And there are a few aspects of the game he still needs to grow in. His frame is the most obvious area that needs improvement, and it’s also something he has limited control over. He will certainly put on muscle before he leaves for college, and that would be smart — he needs to be able to match up physically with post players who are bigger and stronger than him. But this doesn’t make Zimmerman soft — he’s a tough kid who doesn’t mind contact and often seeks it out in the post, and he’s not scared of anyone. But right now his frame is very thin and it doesn’t allow him to be as physical as necessary at times. In the games I watched over the weekend, Zimmerman spent too much time drifting along the perimeter, but that has more to do with offensive systems than anything. His team didn’t run a whole lot of action through him in the post. He struggled receiving passes at times and corralling the ball on rebounds, but his hands haven’t been a marked weakness of his in the past and I’m tempted to chalk it up as a fluke.

As far as what Zimmerman does well, it’s a lot. He runs the floor, never gets tired and has excellent instincts on defense, keeping his hands active. His footwork is advanced and so is his jumpshot. Zimmerman is very comfortable shooting from anywhere on the floor and utilizes a fadeaway out of post-ups, though more aggressive post moves would be preferred. His athleticism stands out, and part of what makes him so versatile. As his coach said, Zimmerman is a smart, savvy player. To use an overused expression, he has a great feel for the game. His vision passing out of the post is truly exceptional, and he just makes the correct plays. Zimmerman is a gifted player with a bright future — he has all the tools to be a great college big man.

I watched Sedrick Barefield play in three games over the weekend. He struggled in two of them, and was brilliant in the other. Barefield has all the physical tools to be a great point guard: he’s got a big body, his vision is exceptional, and his handle is great. His jumper is solid but streaky in Indianapolis over the weekend.

Like Barefield himself admitted after one of his games, when he struggles it’s because his mind isn’t right. When things aren’t going well, he gets frustrated and tends to force things. At that point, his game becomes to focused on looking for his own opportunities rather than creating for his teammates. He needs to work on keeping calm and letting the game comes to him. The fact is, Barefield carries a heavy load on his team and has the ball in his hands more often than not. This means he’ll have more opportunity to make iffy decisions than other players — and he may feel an increased responsibility to take over a game when he feels his team is struggling.

However, when he gets in a groove, it’s a thing of beauty. He has a Burke-esque ability to dictate the pace of a game. His crossover is lethal — he has no trouble getting by defenders and occasionally making them look silly. His quickness is off the charts and his handle is advanced. His jumpshot looks smooth but he wasn’t hitting this weekend. I would love to see him crave contact more in the post. With his ability to get by people and his athleticism, he could make a living at the free throw line. There is a lot to like about Barefield’s game, and Michigan would love to have him. He’ll only get better, and he has a lot of room to grow.

Derryck Thornton, a top point guard recruit in the class of 2016, has spent all summer playing with Stephen Zimmerman for Dream Vision’s 17U squad. Unfortunately, over this particular tournament we only got to see him play with the 16U team – still one grade level up. While Thornton showed flashes of ability it seemed like he was still trying to figure out his way playing with a new team and it may have curtailed his production a bit.

Thornton’s handle is very impressive and he exhibited the ability to get by defenders with ease. His shooting was solid from the perimeter with a smooth release but he really struggled from the free throw line. He had some trouble finishing inside with his willowy frame, but didn’t shy away from contact and was able to draw fouls regularly. He seemed to be consistently a step or two ahead of his teammates, which led to frustration at times — he did a good deal of explaining during games. Thornton has a tremendous ability to create off the dribble and he makes his teammates better. I would have liked to see him pull up for midrange opportunities a little more — his shots were either at the rim or beyond the arc. Thornton will only get better, and he’s already really good. He probably fits in better with the 17U team as far as basketball IQ goes, and at times played down to the level of his competition in 16U games.

Another player in the class of 2016, DJ Wilkins displayed an impressive all-around game in Indianapolis. The rising sophomore is already being recruited by the majority of the Big Ten, and his list of suitors is sure to grow throughout his recruitment.

Despite being 6-foot-3, Wilkins makes his living at the rim. He is a terrific rebounder for a guard and loves bodying up bigger players and drawing contact. He’s skinny but extremely tough and has excellent touch around the basket. He’s very quick and his handle is already very solid. His jumper is developing, but he doesn’t go to it often. He is all about attacking the rim. Wilkins is a strong prospect right now, and he’s only going to get better. If he grows a bit, he will be a lethal combination of speed, size and toughness at two guard in the next level.