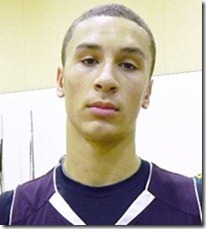 When Tyler Williams, a 2015 wing prospect out of Carrollton, Texas, began this summer with Urban DFW, he didn’t do much talking. His coach, Corey Dudley, described the 6-foot-4 swingman as a lead-by-example kind of player.

But that has changed. Now, not only is Williams embracing the role of being a vocal leader, he’s even running timeouts.

“When we started out, he was hesitant to be a vocal leader,” Dudley said at the Adidas Invitational on Saturday. “This year, he’s really made an effort to be more of a vocal leader. A couple times in this game, I didn’t even handle the timeout, I let him work the timeout. So, he’s grown into that role, it’s coming out of him.”

But Williams’ vocal leadership isn’t the only area of his game that’s improved. Since Williams took his visit to Michigan last fall, the rising junior has worked hard to improve his jumpshot and physicality — during the Adidas Invitational, Williams stood out as one of the best rebounding guards in attendance. With excellent instincts and an ability to get to the rim, Williams showed off a consistent intensity that was impressive.

More than anything, Williams is a player who can do whatever his coach needs him to do – even though he was playing through a foot injury throughout the tournament.

“It’s really on a game-by-game basis, really. He’s really a utility player in that he can do it all,” Dudley said. “This particular week he has been battling a foot injury, so his balance is not really there so he can’t push off and his jumper is not as consistent as it normally is. His IQ is the biggest asset of his game. he’s an unselfish player and that’s what makes it so easy.”

While Williams has flown under the radar of most Michigan fans since his visit, he’s no under the radar recruit to the Wolverine staff. Williams said he talks to Michigan coaches often, about anything from basketball to his schoolwork.

“I talk to coach (Bacari) Alexander probably on an every-other-day basis,” Williams said. “So me and him are pretty close. I like to keep in touch, and I look forward to what happens in the future.”

Along with planning visits to other schools showing interest, including Creighton, Texas, Texas A&M and Baylor, Williams said he is planning a return trip to Ann Arbor this coming fall. He has already visited Oklahoma State, as well.

For the time being, Williams looks to continue to the progress he’s already made this summer. His coach said improving his foot speed and shooting are two skill sets high on his to-do list.

As far as Michigan goes, Williams said he watched the Wolverines in the NCAA tournament this season and sees himself in the mold of a Tim Hardaway Jr. or even Glenn Robinson III, given his versatility.

One thing’s for sure: there appears to be strong mutual interest between Michigan and Tyler Williams.

“I know he’s very high on Michigan and looking forward to visiting in the fall,” Dudley said.