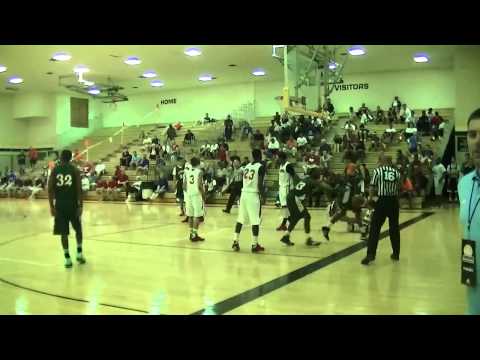 With an appealing all-around game and a relentless scorer’s mentality, Jalen Coleman was impressive throughout his play at the Adidas Invitational and a major reason for the success of his Indiana Elite 16U squad – which eventually won the championship. Coleman is a worker with good instincts and a willingness to do whatever his team needs from him.

There is no question about the strength of Coleman’s game: scoring. As he progresses through the next two years, he would benefit from working to improve his vision and setting up his teammates. However, he was the one being set up by his teammate Hyron Edwards most of the tournament. As his coach, Bill Duany, articulated after one of the team’s games, Coleman can function as his team’s go-to option when an offensive set breaks down, and they can count on him to make a basket, get to the rim or get to the line. Coleman has a solid, consistent jumper but doesn’t settle and draws contact well at the rim.

Coleman’s instinctual and effortless scoring style, and the way he simply puts the ball in the basket by any means necessary, are what has drawn the attention of some of the top schools in the country. He can take his game to another level if he focuses on his setup ability.

Bragg has the combination of length, athleticism and skill that you would expect to see from a top-25 four-man. He was a game changer defensively with his ability to block shots, often times swatting driving guards layup attempts into the bleachers. Offensively, he prefers to face up after catching the ball with his back to the basket but his jump shots was inconsistent. He knocked down a couple but he’s more effective around the hoop. He’s a plus offensive rebounder and finished a handful of offensive rebounds with tip slams.

As eluded to in the previous scouting report, Hyron Edwards’ primary role on his team is to serve as a playmaker and setup man for his teammates. He does this very, very well. Edwards shot the ball well over the weekend and showed that, despite his small stature, he is able to control the pace of a game. Edwards’ obvious strong suit is running the fast break. He has excellent instincts and a natural ability to find the open man at just the right time. He also has the propensity for flashy passes, finding his teammates at times when they aren’t even ready. That being said, it’s on his teammates to be prepared when playing with Edwards — rarely does the East Chicago native exhibit poor judgement with the ball in his hands. Edwards possesses advanced handle, but one of the reasons his recruitment has plateaued a bit this year is because of his lack of growth. Still quite small, Edwards has game, but sometimes struggles against bigger guards in half-court sets. He finished up a big week after I had departed, scoring over 30 points in the 16U Championship game to lead Indiana Elite to the title.

Tyler Williams’ coach, Corey Dudley, accurately described Williams as a “utility player.” The 6-foot-4 swingman can fill many different roles for a team. With the ability to get to the basket and his rebounding, which is excellent for a player his size, Williams can do whatever a coach needs. What stands out about Williams more than anything is his high basketball IQ. He knows where to be, his anticipation skills help him quite a bit on the boards and his help defense was really impressive. All of this creates opportunities for his teammates. The Carrollton, TX native would benefit greatly from improving the consistency of his jumpshot. He seemed hesitant to shoot and when he refuses to shoot an open 15-footer, it makes his game a bit too predictable.

There’s a lot to like about Jaylen Johnson. He’s very athletic, he works hard, and he’s much stronger than his frame would suggest. Johnson has a world of potential given his natural ability, but he’s still very raw as a basketball player. Going up against Stephen Zimmerman, he arguably outplayed the Las Vegas native because of his relentless style and physicality. However, that isn’t enough to consistently out-perform opponents. He has great touch around the rim, but his footwork needs improvement. He didn’t display much of a jumpshot but got to the basket consistently. Johnson is interesting because of his potential, and with some hours in the gym could turn into a very dangerous player. Though he is right down the street in Ypsilanti, it appears Michigan isn’t quite as hot on him as other schools.

The recent prep school transfer from De La Salle High School in Michigan played well over the weekend, but experienced some inconsistency with his jumpshot. When Turner is hitting his jumper, he’s very difficult to guard, but he settles for it quite a bit and it makes him one-dimensional. Turner needs to get to a point where he feels physically confident enough to get in the paint and go to the rim against bigger players — as of now, he’s still very thin. Reclassifying was a smart move for Turner, who will now have an extra year to develop in prep schools against very strong competition. He handled a lot of ballhandling duties for Dorian’s Pride, but at his height and his scorer’s mentality, Turner has the potential to turn into a very good off-guard prospect.