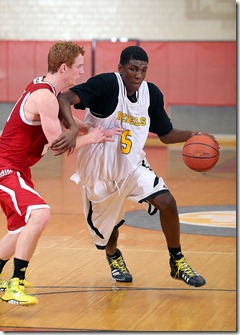 Kevon Looney’s game has an effortless quality to it that can fool you into thinking he’s playing lazy. This isn’t the case, but it did seem as though, over the course of the weekend, he could have done more offensively. Part of that is due to his team’s offensive structure that sees his guards taking a majority of the shots. Looney is gifted physically, and where he is most able to use his gifts (his length, his height) was on the defensive end of the floor. His hands were active, he displayed excellent strength in keeping his man out of the post and his help defense was very good. His awareness on defense was impressive. His length makes it nearly impossible to drive on the Runnin’ Rebels and was a huge boost to his team.

Offensively, his shot is developing. His coach expressly wanted him to shoot, but it did seem like Looney fell back on it too often. He hit some nice threes, but with a player his size it feel as though he is bailing out his defender every time he doesn’t take the ball to the rack. His handle is advanced for a player his size, but he did seem to have trouble creating his own shot off the dribble. Specifically, he encountered difficulty against double-teams. Every time Looney drove to the hoop, he would have no trouble getting by his initial defender, only to be confounded by a second defender rushing him as he approached the elbow. Looney is tall enough to see over almost anyone guarding him, and there are opportunities available off this defensive decision — he just needs to be coached how to recognize them.

That being said, Looney is a top-level prospect whose ceiling is very high. He’s also a perfect fit for the stretch four position at Michigan. He possesses all the skills necessary to be very successful at the next level. His teammates called him “KD,” and it’s easy to see why — with his shooting ability, handle and versatility, 0nce he gets in the paint, finishing through contact is a breeze. Looney is a great prospect with serious game that will translate to the college level.

With the basketball pedigree backing up Eron Gordon, it’s tough to imagine having to live up to expectations every time he steps on the court. However, even while playing up with the 17U squad, Gordon still manages to impress. His frame is still slight, but he’ll get bigger as he gets older and that doesn’t mean he hesitates to take the ball to the hoop. I only caught one game — not to mention one in which the referees seemed especially lenient — but Gordon consistently took the ball to the rack and drew solid contact. He didn’t have a good shooting night, but Gordon can clearly shoot. Gordon struggled a bit on Friday night, but even then he was able to create opportunities for his teammates and consistently get to the rim. Although he was frustrated at times, it was clear that Gordon is a unique talent withe a bright future.

I unfortunately did not get to catch Justin Jackson in action for too long, but there was a reason for that — in the game I watched, he quickly led his team to open up a 30-point deficit and his coach sat him for most of the second half. During his brief, but impressive stint, one thing is obvious: Justin Jackson is going to be a household name on the high school level, and very likely any level, very soon.

Jackson, at 16, is already 6-foot-7, yet handles the ball with precision and poise as though he were a seasoned point guard. He has a lanky build with long arms and runs the floor well. His athleticism is very impressive, and his strength allows him to play literally any position on the floor. Jackson is still working on improving his jumpshot and his handle, but his vision is what makes him stand out. He considers himself a point guard, and it’s tough to argue with some of the passes he was making. Justin Jackson has all the physical tools to be an excellent college player — right now. Unfortunately for those he will be going up against in high school, he still has three more years before moving on to the next level.

A rising junior playing for Spiece Indy Heat, KJ Walton showed off an impressive array of skills over the weekend. His strengths lie in taking the ball to the hoop — his athleticism allows him to finish over big men but at 6-foot-3 he’s not exactly small himself. Walton’s body control going to the rim is excellent and his ability to finish through contact was exceptional. While he’s extremely quick, his handle appeared to need a bit of work as he got picked a few times. He also didn’t shoot the ball much from the perimeter, electing instead to attack the basket. He could have opened up his game a bit more with some outside shooting.

Mack Mercer, a rising senior from Plymouth, IN, was very good in the game I watched him play. He used his big frame well in the post, concentrating on footwork and displaying a soft touch around the basket. His offensive versatility is undoubtedly the major strength of his game — Mercer is comfortable with the ball in his hands anywhere on the court and has above-average shooting ability with a confident stroke from long range.

Mercer has been working on his strength in the post and rebounding, and he struggled a bit defensively. The big man is still learning how to use the extra 20 pounds of muscle he put on from the end of the high school basketball season, and his quickness needs work. Mercer has the smarts and the offensive game to be a dangerous Big Ten player, but his toughness in the post needs work.

Michael Benkert visited Michigan last summer, and since then his recruitment appears to have cooled a bit. His jumpshot is improving, however, and he’s an aggressive player with no fear going to the basket. Benkert can score in many different ways, and displayed an excellent floater in the post. He also has some bulk, allowing him to finish well in traffic.