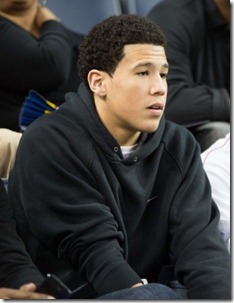 WASHINGTON — Devin Booker hasn’t trimmed his list of schools. But he will soon, and Michigan will almost certainly make the cut.

The Wolverines’ top priority in the Class of 2014 displayed his full arsenal of skills at the Nike Global Challenge in front of dozens of high-level college coaches, including John Beilein, Tom Izzo, John Calipari, Frank Haith and Roy Williams.

A report surfaced Saturday that Booker had cut his list of schools to five, but the 6-foot-4 shooting guard quickly went to Twitter to refute the story. Booker will stick with his plan of trimming his list after the summer evaluation period ends.

“It’s about eight or nine,” Booker said. “I haven’t officially cut it down yet or anything. I’m just taking it slow, I’m enjoying it, and maybe after the summer I’ll cut some down officially.

“That’s probably when I’ll cut it to seven or five, I’m not sure, and then I’ll just go from there.”

It’s a very safe bet the Wolverines will still be in the mix at that point. It doesn’t hurt Michigan’s chances that Booker is originally from the state and his Mom lives there. He’s spent this summer in Michigan when not traveling for tournaments.

“Michigan’s recruited me since eighth grade,” Booker said. “I’ve been there what, seven or eight times? We have a great relationship, so Michigan will be in there.”

Booker noted that the coaches he has the best relationships with are Beilein, Izzo, Calipari and Haith. They are all in the mix to host Booker for visits this fall — he’s already planning on attending Kentucky’s Big Blue Madness — when he’s in the final stage of his recruiting process.

That’s a stage, Booker says, during which he’ll want both his parents — even if separated by 1,000 miles — involved and helping him.

“My Dad hasn’t been on a Michigan trip with me yet,” Booker said. “I actually want to take my official with both my parents, so I’m just gonna — Michigan will probably be in there.”

Booker’s USA South Team went 3-1 during the tournament that featured 40 of the top U.S. players and four international U-19 teams, falling in the championship game to the USA West team. Playing on a team stocked with talent, Booker made his presence felt — on both ends of the court.

His ability to shoot from the outside is no secret, so it wasn’t a surprise when he caught fire in his team’s 130-122 shootout semifinal win over USA Midwest — making five FIBA 3-pointers en route to 21 points. More impressive were Booker’s two left-handed finishes at the rim, including one drive that began, while snugly guarded, near halfcourt.

Booker was just as impressive on the other end of the court. There wasn’t much defense played in that semifinal win, but a play that stood out was when Booker chased down point guard Tyus Jones (No. 3 in ESPN’s rankings) and appeared to smother his layup attempt against the backboard. A foul was called, which Booker clearly disagreed with.

Whatever the call, the play highlighted the pride Booker takes in playing defense.

“I just wanna be the best player I can on both sides of the floor,” Booker said. “Me and my Dad stress on that a lot — just playing both ends of the floor.”

It will be at least a few months before Booker makes a decision. But if the tournament in Washington was any indication, it will be more than worth the wait for whichever school lands the dynamic playmaker.