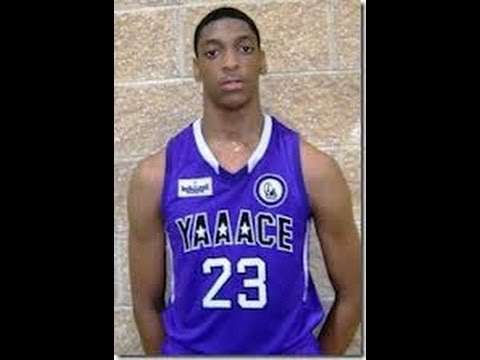 In action against a woefully overmatched team during the Adidas Invitational earlier this month, Jackson needed only about 15 minutes to pull his team out to a 30-point deficit. And it wasn’t as though Jackson was merely taking the ball down low and using his height to score over much shorter players — the young Canuck was running the offense, leading the break, making great passes and controlling the pace of the game.

Jackson isn’t just a physical specimen at a very young age — his basketball IQ is as advanced as his body.

“I sort of think of myself as a point forward,” Jackson said. “I can dribble, I can shoot, but my main ability is my passing. That’s what a lot of people say: that I have good vision.”

A lot of people are right. Jackson’s coach for his YAAACE AAU team, Jordan McFarlane, said Jackson’s favorite player is Magic Johnson and that’s who he models his game after. The ceiling for Jackson is sky-high, and the talented rising sophomore is working hard to ensure that he fulfills his dizzying potential.

“This summer, I’d like to put a lot of weight on,” Jackson said. “When I go against older guys I want to be physically fit, you know? And also my speed.”

Naturally, Jackson has attracted all sorts of interest from colleges across the country, though at this point it has the feel of the calm before the storm. Since he’s a member of the class of 2016, college coaches aren’t allowed to call him just yet. He said he’s received letters from Ohio State, Wake Forest, Baylor and Detroit. Other schools, Michigan included, contact McFarlane.

For now, however, Jackson is focused on deciding on which American prep school to attend for his remaining three high school seasons. Among the schools he’s considering are Findlay, Huntington, La Lumiere and St. Benedicts.

“Well pretty much every prep school has contacted us about him,” McFarlane said. “We have a big decision to make in the next couple weeks as to where he’s going to end up. He’s definitely going to end up south of the border. He won’t be in Canada for high school next year.”

While his talent level is already quite high, Jackson still needs to work on his game to prepare himself for the competition he’ll face at any of the nation’s elite basketball powerhouses.

McFarlane sees plenty of room for growth in an already diverse skill set.

“So far, what we’ve been working on this year is his jumpshot,” McFarlane said. “That’s something that I really think he’s going to need to improve on. He’s doing alright with it now, but if he can improve it so that he’s consistent every game, it will really open up his penetration to the basket and enabling him to be able to create. He’s a creator. Along with the strength and conditioning and the mental game.”

The attention Jackson is receiving now is nothing compared to what he will surely receive after playing even one full year in the United States. It’s safe to assume all of the basketball bluebloods will be after him, but it’s nice that Michigan has thrown its hat in early.

Jackson said he watched the Wolverines this season in the NCAA tournament, but when I asked him if he thought he’d fit in Michigan’s offense, he confessed he wasn’t focused on that so much as watching his fellow countryman, Nik Stauskas.

“I was more watching my Canadian, Nik Stauskas,” Jackson said. “I wasn’t really paying attention to anyone specific, but he’s nice.”