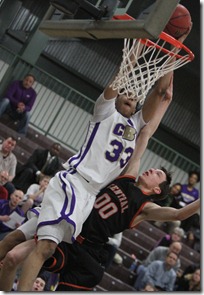 WASHINGTON — Jordan Barnett finally got his chance to play in front of John Beilein, even if he didn’t know Michigan’s head coach was watching him.

The Class of 2014 prospect hasn’t received an offer from Michigan but played in the Nike Global Challenge during the second July evaluation period. Barnett was watched by John Beilein and LaVall Jordan, who were both in D.C. for the event.  Beilein had previously told Barnett during an unofficial visit to Ann Arbor in June that he needed to see him play before offering a scholarship.

“I actually didn’t know he was there,” Barnett said after the tournament’s final day. “That’s the first I’ve heard about that. I knew he’d be here at some point. I didn’t know what day it was gonna be. Yeah, it’s good to know that.

“This was the first time he’s actually seen me, so I hope he was impressed.”

Since his June visit, the 6-foot-7 St. Louis prospect has been in constant contact with Jordan in addition to a few exchanges with assistant Bacari Alexander.

“Coach Lavall Jordan, he’s the main one that talks to me,” Barnett said. “Coach Bacari Alexander sends a few texts here and there. Coach Jordan, he has a hard time reaching me sometimes. Sometimes I fail to answer my cell phone. He tries. He definitely tries his hardest to reach me, get in contact, and make me tell him what events I’m gonna be doing.”

Jordan has also given advice to Barnett and told the small forward that he envisions him playing the two guard in college.

“Also, he tells me that what excites him about me is that I have a whole different gear,” Barnett said. “Sometimes I don’t play in the ultimate gear, I’m playing down at a seven or eight (when) maybe I need to be at a 10.”

That gear and Barnett’s athleticism and versatility are attributes that have a few Big Ten schools in addition to others interested.

“Michigan State’s definitely working their tail off to get me to go there, Florida as well, Texas, and I’m feeling like Michigan’s starting to do the same thing,” Barnett said with a smile. “Iowa also.”

In June, Barnett said he hoped to make his college decision by the end of the summer. After the Nike Global Challenge concluded Saturday, he said that realistically it will probably take longer. Still, he’d like to decide sooner rather than later in case some scholarships offered are filled by other players.

“Whew, I don’t know. I don’t know what I’m gonna do,” he said. “It’s an extremely hard decision. … I mean, I want to make a decision by the end of the summer but I don’t know if that will happen or not.

“I do kind of want to get it over with, because, you know, colleges are gonna start — you know, if I wait too long, somebody comes along at my position they may take away the scholarship. I definitely want to try to commit before something like that happens to one of the schools I want to go to.”

Barnett played limited minutes for the Midwest team during the Global Challenge, but made the most of them. What stood out was how effortlessly he ran the floor, his rebounding awareness, and his defense. During the Midwest’s blowout win over the East in Saturday’s third-place game, Barnett never failed to get a body on an offensive player and box out. He also was one of the few players in the fourth quarter contesting shots at the rim.

“That’s the No. 1 thing,” Barnett said. “People tell me I can be a really talented defender, and I guess that starts with hustling at all times.

“If I’m gonna foul somebody to keep them from getting the easy layup or dunk, I’m gonna do it. That’s just how I play. I’m a hustle player. I’m a defensive player first and offense comes second.”

Offensively, Barnett might remind Michigan fans a bit of Glenn Robinson III as a freshman, although he’s about 30 pounds lighter. He prefers to play on the wing and baseline, will shoot from the outside when open, and scores on baseline cuts to the basket (a staple of Robinson’s first year with the Wolverines).

While Barnett’s athleticism stood out — on consecutive defensive possessions Saturday, he elevated for rebounds over taller defenders — he also showed a smooth shooting stroke, going 3-for-6 from the FIBA 3-point line during the event.

And maybe most importantly, Barnett had his best game of the tournament on Thursday, in front of Beilein, when he scored 11 points and grabbed four rebounds in a win over Brazil.

“Definitely something that I’ve learned from playing with this type of competition is there are, there’s a lot of talent out there on every single team we play,” Barnett said. “You’ve got to play hard constantly, you’ve got to work on your game constantly, because if you’re not working hard, somebody else is and they’re gonna take your spot. You just have to continue to push forward and work hard.”

Barnett will get another opportunity to showcase his abilities at the national level this week when plays for his St. Louis Eagles AAU team at the AAU Super Showcase.