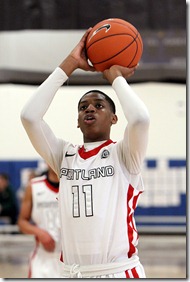 WASHINGTON — If the Nike Global Challenge made one thing crystal clear about Kameron Chatman, it’s that the Class of 2014 prospect will do whatever’s needed of him.

Whether that’s rebounding, deferring offensively, or cheering from the bench, Chatman put on his best team hat during the four-day tournament and his USA West team won four consecutive games and the championship.

“It just gave me a better chance to get better, expose myself, and help my team win, which we did,” said Chatman, who was offered a scholarship by the Wolverines in early June.

“I like it — just having Daniel, Stanley, being able to pass — that’s what I like to do,” Chatman said on Friday. “And we winning, so I’m having a good time.”

Chatman demonstrated that if he ends up in, say, a loaded talent pool at Michigan, he won’t have a problem with it, will learn from his teammates, and will do what’s in the best interest of the team.

What remains to be seen is where Chatman will play his college basketball.

Originally from Portland, Chatman now attend Long Beach Poly in California – where he was forced to sit out last season due to transfer rules. He’s weighing offers from Arizona, Oregon, UConn, USC among others. He also has the Michigan offer to consider, and Duke and Syracuse — while they haven’t offered — are watching him closely during the summer evaluation period.

Chatman said Friday that all of the coaches are going through his Dad, former Oregon State player Caanan Chatman. He plans on taking five official visits beginning after the evaluation period wraps up.

“I’m probably gonna plan on taking an official to Michigan,” Chatman said. “But it’s not planned out right now.”

Chatman will wrap up his summer season at the Las Vegas Classic this Wednesday through Saturday.

At the Challenge, Chatman played in front of John Beilein on Wednesday and Thursday and assistant Lavall Jordan on Friday. Duke assistant coach Steve Wojciechowski also watched him play, among others. His audience had no effect, however, on Chatman’s game, which he let come to him.

Chatman went scoreless in two of his team’s four games and had just four points in the other contests, but he filled the stat sheet — grabbing rebounds in traffic, getting his hands in a passing lane for a steal, and, of course, passing to his hot-shooting teammates.

“I’ve always passed in my game, but (now) more passing,” Chatman said of the experience. “But it’s all good. It’s not really that much of a change.”

When asked his position, Chatman said he guards the one through the four. He prides himself on being versatile on both ends of the court and is aware of what college coaches like from freshmen and what could gain him more playing time.

After consecutive scoreless games, Chatman showed in a 1-minute span of Saturday’s championship win over USA South that he can score when needed. Immediately upon entering the game, he knocked down a midrange jumper and made a tricky baseline layup.

He didn’t score again, but he didn’t need to. And he was perfectly content to soak in the experience, especially the final result.

“Definitely, yeah,” Chatman said when asked if he was playing with the greatest assembly of talent in his young career. Later, after the 98-95 championship game victory, Chatman said the tournament was the closest thing to college basketball he’ll experience until the real thing.

Soon enough, the West Coast kid will be on a college campus. And, by the way, weather won’t play a factor in his decision.

“No, not for me,” Chatman said. “Most California dudes do that just because they got good weather and all that, but I’m from Portland so I’m used to the rain and cold and so it’s not really a factor for me. It’s not affecting me.”