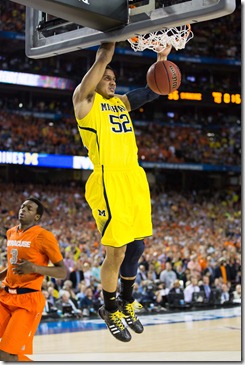 ‘Was Michigan ever good at basketball?’

That was Ben Cronin in 2007. Beilein excused the question because Cronin “grew up watching Sports Center in 1999 when we took a hiatus from the post season” but six years later Michigan basketball is back.

Beilein inked a $2.45 million per year contract extension through 2019 earlier this month and it’s a safe bet that the Wolverines will be a force to reckoned with for the foreseeable future.

Michigan’s head coach isn’t worried about the past, he’s more concerned about what the extension means for the program’s future.

“But obviously I love what I’m doing now and who knows where this all goes and I love the faith the University has in me to re-do my contract for that extension.”

Earlier recruiting has led to the necessity of longer contracts, according to Beilein who is focused on pursuing 2015 and 2016 recruits along with the oft discussed class of 2014.

“Back in the day when you weren’t looking at 2015 and 2016 kids [this wasn’t as big of a deal]. They want to know [who’s with the program]. With young men committing earlier and just looking at the long range, they want to know who’s going to be coaching there,” Beilein said. “That’s the only plan that we have. It’s important and I think you’ll see that we aren’t the only ones doing that. You’ll see it’s a commitment by the University, it’s a commitment by myself, ‘this is what I want to do’ because I’ve found a place that is just a tremendous place to coach.”

Beilein was confident that he wants to coach “at least” six more season but doesn’t want that to be misinterpreted. Six years is no hard stop.

“It’s very similar to when I first came here. I think that’s a fair amount for you to just do your job and stay focused with it,” Beilein explained. “The day I don’t want to get up and go to the office will be the day I don’t coach anymore.

Michigan assistant coach LaVall Jordan nearly made the jump from rising star assistant coach to Big East head coach. Jordan was a finalist for the head coaching job at his alma mater, Butler, before the Bulldogs selected Brandon Miller as their new headman.

Beilein compared to situation to an NBA early entry.

Beilein emphasized that Butler would be a great situation for Jordan – and he would have “understood it 100%” – and that Michigan’s assistants can pick and choose the right job.

“With all of our assistants, they’re very capable assistants,” he said. “What they have is the best of both worlds right now. They have a top high level coaching environment here at Michigan so they can be very selective with where they would like to go if they were given a head coaching opportunity.”

But Michigan’s staff is back and even Jordan was ready to hit the ground running.

Lost in Michigan’s remarkable run to the Final Four was a bittersweet close to the season for Jordan Morgan. Morgan never quite looked himself after being plagued by a high ankle sprain midway through the season.

“I’ve really seen some good things [from Jordan Morgan]. We’ve only had two workouts with him and then yesterday,” Beilein said. “The way he was ending to the way he is now. There’s a really positive development with his shooting, his attitude, everything. He’s healthy. His legs are healthy.”

Although Morgan still played in 36 of 39 games, he was clearly never himself after the ankle injury. He played fewer than 10 minutes in 14 of Michigan’s final 20 games and registered just 25 minutes of playing time in the NCAA tournament.  (Photo: Dustin Johnston)

“I don’t think we’ll ever be able to really put a number on what that cost him, that injury,” Beilein said. “That sprain was nagging and threw off his timing, it threw off his confidence. It will really be big for him to come back the way he had played at several times over his career here. There were times he was the best big man on the court – on either team.”