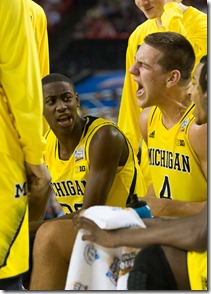 Mitch McGary and Glenn Robinson III have spent a large part of their summers traveling to LeBron James, Kevin Durant and Amare Stoudemire’s Nike camps. The invitation only events provide an opportunity to compete against other college stars but more importantly to showcase their skills in front of NBA scouts. The motivation behind the camps is no secret, the 2014 NBA Draft process starts now. Despite the fact that additional early NBA Draft attrition could be inevitable next April, John Beilein is most impressed with how both players have handled themselves in their return.

“I’ve heard some great comments on both of them in some of the areas that they’ve really improved on,” Beilein told reporters on Tuesday morning. “Whether it’s passing, shooting, defending – that’s all music to our ears . I just love their attitude. They’ve unpacked their bags and say we’re going to make Michigan as good of a team as we can be.”

McGary and Robinson need look no further than their point guard last season for guidance on how to handle the “two-and-done” process to perfection. Trey Burke flirted with the NBA Draft before returning to school and taking himself from borderline first-rounder to lottery pick.

Beilein emphasized the progress that both returning stars have made, eliminating bad habits that took so long to break last season.

“I also like with Glenn and Mitch working on their balance – catching the ball on two feet, maximizing and being efficient with their game,” Beilein said. “I watched Mitch yesterday and those are things that are in the past now. He does all those things now and he’s worked hard to get there.”

If Mitch McGary with balance is anything like Mitch McGary in the NCAA tournament, the rest of the college basketball landscape could have a problem. McGary averaged 14.3 points and 10.7 rebounds per game in the Big Dance and was critical to guiding the Wolverines to the National Championship Game.

Despite Michigan’s lengthy season, the Wolverines have still made progress in the weight room across the board.

“Mitch and Glenn – I could go back 12 months when I first saw them workout then,” Beilein said. “Their bodies are changing in a very positive way.”

Nik Stauskas and Caris LeVert also earned praise from Beilein for their work in the weight room. LeVert’s physique has been the talk of the offseason as he continues to grow in the height department and fill out his frame.  He’s listed at 6-foot-6, 185 pounds on the latest Michigan roster compared to 6-foot-5, 170 pounds last fall. Stauskas also added 15 pounds to his reported weight from 190 to 205 pounds.

“I did get to see Nik and Caris a great deal in June and I know that both are carrying much more weight than when they left this season and good weight – I thought.”

While Beilein was quick to emphasize the importance of Jordan Morgan and Jon Horford’s  leadership as  the only two players on the Michigan roster with greater than sophomore eligibility. He was also quick to point out that Michigan’s sophomores have plenty of experience.

“Jon and Jordan have seen a lot of great things, how great teams are built,” Beilein said. “But there was a lot of experience there for those five sophomores that they’ve brought to the freshmen.”

In the backcourt, LeVert, Stauskas and Spike Albrecht could be the key to a smooth transition for Michigan’s incoming freshmen.

Stauskas had an up and down NCAA tournament but started 33 games and averaged double digits for a 31 win team. LeVert, who served as Trey Burke’s protégé a season ago, made good use of his burned redshirt – he made his minutes count even in limited opportunities.  Albrecht’s timely success is no secret either, he exploded for 17 points in the National Championship.

Michigan’s backcourt sophomores will have to help along Derrick Walton and Zak Irvin in the backcourt the same way that Trey Burke and Tim Hardaway Jr. took them under their wings last season. While the freshmen are important, the success of Michigan’s five sophomores on the floor is likely to determine Michigan’s fate in 2014.