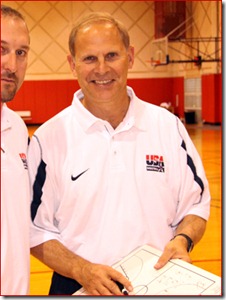 While Michigan’s assistant coaches were busy on the recruiting trail over the past few weeks, John Beilein was in Kazan, Russia, contributing as an assistant coach for Team USA at the World University Games.

The United States finished a disappointing ninth, after a 94-85 loss to Canada in the final game of the preliminary round knocked them out of medal contention. However, despite the less-than-stellar finish, Beilein said it was a great experience. He also offered a partial explanation for what he saw as the main hurdle for team USA.

“The national teams at particularly Canada, Australia and Russia, they were really well-prepared and they had practiced for a long time. They had been together and we were just introducing ourselves to each other. That’s something I think USA basketball will look at in the future, but would I do it again? Absolutely. It was a great experience for me.”

It was a truly unique situation for Beilein, who had never before been an assistant coach in his career. Davidson coach Dave McKillop was head coach, with Beilein and South Carolina coach Frank Martin serving as assistants.

Beilein said he enjoyed playing the unusual role, and it also freed up opportunities for him to focus on strategy and preparation when scouting opposing teams.

“That was good. That was actually very good,” Beilein said. “I enjoyed saying, ‘okay, Norway, Finland, who do we play? I’ll scout it.’ I wanted to scout other teams, I wanted to see what other people did, so that was always rewarding for me.”

But he didn’t just learn from scouting opponents — Beilein said the interactions with the other coaches were where he learned a lot, as well.

“Listening to Bob McKillop and Frank Martin talk, they would say things that I had never heard of,” Beilein said. “That happens every day with college basketball — this game changes. They would say things and I would think, ‘I never even thought about that in a game.’ And I’m sure I was saying things to them where they thought, ‘I never thought about that.’ So really, it was a clinic.”

Working closely with Martin was a rewarding experience for Beilein. He and the South Carolina coach were roommates, and Beilein said they woke up and went to sleep talking about basketball.

Along with sharing strategy and coaching techniques, the two men also discovered how their careers were intertwined.

“He and I, basically, from the time we were together, when you look back at it, when I left West Virginia, Bob Huggins went to West Virginia, Frank became the head coach at Kansas State,” Beilein said. “So, there was that connection that we didn’t even put together until we talked about it a little bit. We had a lot of stories just with basketball and comparing things, but I didn’t know him like that. Believe me, I know him really well right now. It was great. I think that we have a bond right now that will last forever. A lot of inside jokes about our time together, but a bond that will last forever.”

Along with picking the brains of other coaches, Beilein also had the opportunity to coach players he’s used to strategizing against during the Big Ten season.

Photographs from Russia of Beilein coaching the likes of Adreian Payne, Aaron White, Will Sheehey and Yogi Ferrell may have turned Michigan fans’ stomachs, but Beilein said that while he certainly imparted some concepts to those players, he also learned a lot about their respective games.

“Anyone that we played against this year, there was a great connection and there was some ribbing now and again but it was good,” Beilein said. “Between Yogi being the point guard, I recruited Yogi a little bit, Will Sheehy, I had recruited as well. Aaron White. They were good. Some of the things that we ran – I didn’t do a lot with the offense, it was more with the defense – but I gave them the names we (at Michigan) give them. So they probably will recognize some of the things if they retain it. I certainly remember some of the things they do well and don’t do well and will maybe keep that in my brain sometime. It was a great experience.”

It was a busy time for Beilein. So busy, in fact, that he didn’t have much time to learn the language. When asked if he had picked up any Russian, Beilein could come up with just one word.

“‘Spasibo,’ which means thank you,” Beilein said, a bit sheepishly. “That’s about it.”