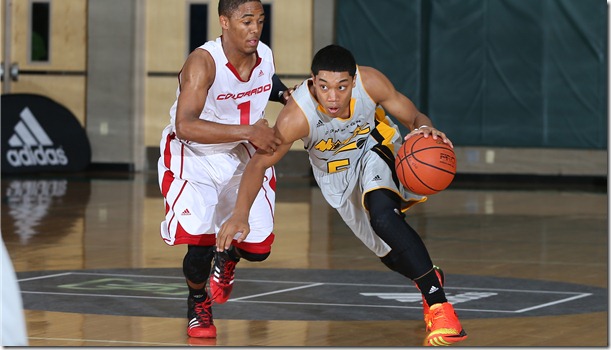 The summer evaluation season officially came to a close on Sunday as tournaments in Las Vegas and Orlando wrapped up. Michigan coaches were spotted across the country, checking in on a number of top prospects.

Rivals.com focused on Barefield’s tendency to force things to happen, the primary knock on his game this summer.

At times Barefield forced the issue a little too much and made some poor decisions; but when he relaxed and made the available play, he was putting teammates in position to score.

Michigan coaches followed Barefield throughout the summer and the next step will be working to get him on campus in August or September, when a scholarship offer is likely waiting.

John Beilein also spent significant time tracking 2015 combo forward Evan Boudreaux in Orlando over the final evaluation period. Boudreaux is a prospect that can do a bit of everything at the forward spot, providing toughness to go along with a solid outside shot.  Future 150 was impressed with Boudreaux’s play at the event.

Boudreaux has improved his perimeter game in the past year and it really shows. Last season he was considered a PF and now he is working to be a more complete player. He can score on the block as well as facing up. Boudreaux is a versatile guy who plays hard 100% of the time and will make an impact on a program in the near future.

Michigan has been at just about every AAU game that Devin Booker has played over the last couple years and the Wolverines continued to track him in his final weekend of AAU basketball. Booker was in Orlando with the Alabama Challenge for AAU Nationals and played well.

Court Cred posted some footage and a short interview from the event.

Future150 noted that Booker was deadly once his jumpshot heated up:

Booker lived up to his reputation as a big time scorer during his game against Q6. While he got off to a slow start, Booker warmed up after a couple of threes went in. He began to show why he is considered such a deadly scorer who can bring almost instant offense to any squad next season.

Rivals.com reports that Booker caught fire and plans to cut his list shortly with his father.

All of that changed in the fourth quarter, however, when the smooth 6-foot-6 wing knocked down consecutive contested, pull-up three-pointers to break open a lead and find his confidence. The Challenge pulled out a win that was much closer than the final score would indicate.

Booker finished with a game-high 27 points in the win, knocking down clutch free-throws, athletically finishing above the rim in transition and hitting jumpers both off of screens and the dribble.

“I just feel that as the go-to guy on this team I have to do big things in crunch time,” Booker said of his late-game heroics. “Sometimes I’ll have to put my team on my back when we need a bucket.”

The four-star went on to explain that he plans on sitting down with his father in Mississippi later this summer and shortening the list; but for now, many schools still have a shot at signing the scoring specialist.

Kevon Looney helped the Milwaukee Running Rebels to the 17U Super 64 finals, capping his AAU career with another big weekend. Looney has long discussed trimming his list after the July period and plans on taking official visits this fall. Michigan will be in tight competition to earn one of Looney’s five allotted official visits.

Here’s footage of Looney in action in Las Vegas.

Looney’s scouting report is nothing earth shattering, but more of the same.

Top 10 prospect went to work late with some good moves around the hoop where he showed his body control and touch, finished plays at the free throw line and knocked down some tough contested shots off spins and up-and-unders etc. Later Looney was his normal self again, throwing in dunks he makes look easy and blocking shots with his long reach. – See more at:

Looney was an all-around standout in the Rebels’ win over Dream Vision. Although he fouled out in the second half, Looney scored at all three levels, burying deep threes, hit mid-range stepbacks and also remaining productive around the rim thanks to his rebounding and putback prowess. He also fired multiple crisp baseball outlet passes to streaking guards for buckets.

John Beilein spent some time watching Josh Jackson and Jaylen Johnson in Las Vegas over the weekend as well. Jackson has long been known as a class of 2016 star in Michigan but he’s emerging nationally with his huge performance in Las Vegas. Rivals.com writes that Jackson could be the top player in the class of 2016.

A wing with a pure jumper and range beyond the 3-point line, Jackson is a big-time athlete with lots of wiggle to his game. This is a kid who has hit his stride, and he is the best shooting guard prospect that Rivals.com has seen in the class of 2016. He may need to be in the discussion for top overall player in his class.

The bottom line is that Jackson is an exciting player who has potential star power down the road. He has a blast on the floor, and his style makes him a crowd favorite. Jackson isn’t doing interviews yet, but he’s going to be a prospect coveted by coaches at the highest levels of college basketball

NY2LASports was also impressed with Jackson as he went head-to-head with Kevon Looney:

After Kevon Looney dropped 18 in the first half, Jackson somehow followed that up with a 22-point first half as he dropped in jumpers at a high level. Refs needed to stop play to fix the net three times in the half as Jackson’s stroke was so pure that the nets kept coming up through the rim. He’s playing much more assertively as a scorer since the spring and is also a high-level passer with tremendous vision that makes good basketball plays with his sound IQ.

Jaylen Johnson also played well, and continues to be a prospect the Wolverines will track as 2014 recruiting comes into focus.

Jackson was the main show for Dorian’s Pride, but four-star power forward Jaylen Johnson impressed as well. One of the bigger risers during the last update to the 2014 Rivals150, Johnson looks like he’s still on his way up. Very young for his class, Johnson won’t turn 17 for another month and he’s got more skill than he is given credit for.

Josh Jackson might be in play for the top ranking in the class of 2016, but the state of Michigan isn’t short on talent in that class. A pair of local guards, Devon Daniels and Miles Bridges, have emerged on the national circuit over the last two months. Daniels attended Michigan’s College Practice Camp in June and is hearing from Michigan, Michigan State, Central Michigan and Detroit. He impressed in Vegas:

As he often does, Daniels put up another big performance for the Michigan Mustangs in their win over Garner Road. Daniels scored a game-high 25 points and put together some big scoring runs for his team. The 6-4 wing is a high volume scorer and does it in a variety of ways

Bridges played well in Indianapolis and continued his strong summer in Las Vegas.

Bridges is an intriguing prospect because of his versatility as a forward and as a wing. The 6-8 sophomore flashed his ability to handle the ball in transition and shoot from 3-point range. Bridges also attacked the rim from the wing and worked hard inside on the glass. He finished with 15 points in a win over Garner Road.