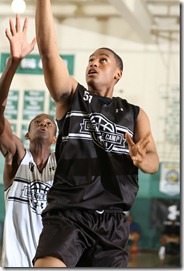 Trevon Bluiett announced his new list of schools this evening, trimming his list down to seven schools from 24.

Bluiett is the consensus No. 47 prospect in the country according to 247 Sports and averaged 19.3 points on 46.7 percent shooting over 22 games in the Nike Elite Youth Basketball League.

Michigan has been recruiting Bluiett steadily for over two years and offered him a scholarship in June of 2012. Bluiett told the IndyStar that he has the best relationship with Michigan’s coaches.

“I probably have the best relationship with their coaches,” he said. “Me and (assistant coach) LaVall Jordan talk or text almost every day and coach (John) Beilein is in contact about once a week. He lets his players play and I like that. He has a lot of trust in his players and they play with a high IQ.”

UCLA has made a recent surge in Bluiett’s recruitment after hiring his former prep coach, Ed Schilling, as an assistant coach. Butler has long been considered a front-runner for Bluiett’s services but Brad Stevens leaving for the Celtics is thought to have damaged their standing. Indiana was the first school to offer Bluiett in 2010 while Arizona just offered on Monday.

Bluiett plans to make a college decision before the early signing period in November.