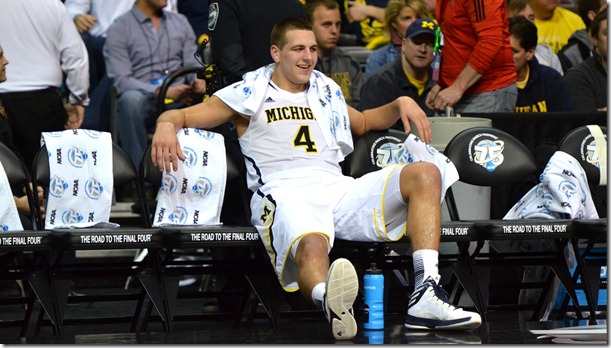 If Mitch McGary’s grade is based solely on his final exam, he passed with flying colors. McGary’s NCAA tournament run was legendary and completely unexpected given his play over Michigan’s first 23 games. The jump in performance came after what could be described as nothing better than a learning year in the Big Ten.

McGary’s non-conference season was defined by limited flashes of brilliance. A great play always seemed to be followed by a poor decision or mental lapse. The burly freshman didn’t see the court for more than 20 minutes in any of Michigan’s non-conference games as John Beilein opted to bring him along slowly. In Big Ten, McGary regressed against better competition. He played more minutes, partly due to Jordan Morgan’s injury, but his rebounding and offensive efficiency declined.

Then came the NCAA tournament and the return to form that, frankly, nobody had seen since the summer AAU circuit in 2011. Averaging a double-double throughout six games, McGary played more minutes and carried the Wolverines to the NCAA Championship.

Looking back on the season, John Beilein deserves credit for bring McGary along slowly before unleashing him in March.

The numbers tell the story perfectly. John Beilein did’t take any shortcuts with McGary. He wasn’t able to avoid a couple trouble-spots here and there, but Beilein never rushed things. Michigan never relied on McGary until the NCAA tournament. He only started two games before the tournament and never felt the pressure of his high ranking. Every player’s learning curve is different and it’s up to the coaching staff to bring them along at the correct speed, John Beilein receives top marks for McGary’s development over the 39-game season.

McGary’s A+ in the NCAA tournament will stick with him (and Michigan fans) forever but his season long grade has to account the regular season as well. McGary reached double figures only five times in the Big Ten season and was never really able to find any hint of consistency. Playing physically dominant basketball in the NCAA tournament was impressive, but if McGary is able to impose his will on the nation’s most physical conference for a year that would be special.

NCAA tournament success isn’t always a barometer for success the next year. Durrell Summers is a great example of a player who managed to get hot in the NCAA tournament but could never quite seem to put together an entire season of dominant play.

The good news for McGary is that his explosion didn’t come after years of inconsistent play, it felt like he finally had the college game figured out. The even scarier thing is that there’s so much more untapped potential. McGary was dominating games in the NCAA tournament and was still scoring mostly off of drop off passes and pick-and-rolls. There’s a whole lot more that he can do on the floor and without Trey Burke and Tim Hardaway Jr. on the roster, John Beilein is going to have to explore those options.

McGary turned 21 in June which means his sophomore season will be critical for his NBA aspirations. His decision to return to school was a gamble given his age and just how high his stock was in April, so he’ll have plenty of proving to do. But the opportunity will be there and John Beilein made it quite clear that he’s not afraid to let McGary carry the load.