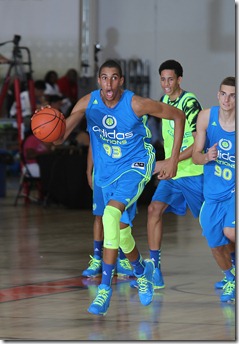 Michigan’s guard and wing priorities are clear with Devin Booker, Trevon Bluiett and Kameron Chatman. All three players are offered, priority recruits that are expected to take official visits to Michigan this fall and the Wolverines are in the thick of the race for each prospect.

But with Glenn Robinson III and Mitch McGary’s likely departures to the NBA after the coming season, Michigan clearly feels the need to add a combo forward to the mix. Kevon Looney is out and Vince Edwards seems more likely to end up at Purdue every day. As intriguing as Chatman is as a prospect, he’s probably too skinny to be a full time four man.

Here are five combo forwards that broke onto the Michigan recruiting radar after the July evaluation period with video and notes. (Photo: Kelly Kline/Adidas)

Bolden exploded at Adidas Nations over the weekend and appears to be a perfect fit for the combo forward position in Ann Arbor. Bolden is long, can defend the interior, finish at the rim and step out and knock down the perimeter shot. Raised in Sydney, Australia, Bolden will be attending Findlay Prep next season along with fellow Michigan target Derryck Thornton Jr. and a host of other talented prospects. His dad is from Flint, Michigan and played basketball at Boise State.

He told Scout.com ($) that he’s always watched the Wolverines and likes the way that his position plays in that system. But the 6-foot-8 combo forward told 247Sports that he’s in no hurry to make a decision and the only school he’s aware of recruiting him right now is Arizona.

Bolden will be highly, highly recruited once he begins playing in the United States. Schools are already pursuing Bolden, but he has been uninvolved in his recruitment to this point with his father handling all the dialogue with coaches.

Bolden told 247Sports that the only school that he was aware of recruiting him is Arizona.

Expect Michigan to jump head first into Bolden’s recruitment after his big weekend at Adidas Nations.

Michigan has been keeping tabs on Cunningham, who we profiled last week. Cunningham is a good athlete with a host of major offers from Northwestern, Dayton, Bradley, DePaul, Missouri, St. Johns, Oklahoma, Iowa, Iowa State, Nebraska and Creighton.

Despite a three-star consensus rank from 247Sports, Cunningham actually is rated as a 4-star prospect by the three major scouting services – Scout, ESPN and Rivals. While Cunningham’s AAU team is loaded with star power – top big men Jahlil Okafor and Cliff Alexander along with rising star point guard Jalen Brunson – Cunningham used the opportunity to play in front of big name coaches to make a name for himself.

Grantham is attending Hargave Military Academy next season despite being a full qualifier, mainly to boost his recruiting stock. Grantham has 11 high-major offers, most recently adding offers from UConn, VCU, DePaul and Texas.

Grantham was impressive at the Reebok Breakout Challenge early in July.

Grantham is a 6-8 face up four-man that loves to take his man away from the basket. He has the ability to not only shoot a 3-pointer, but also can put the ball on the floor and make plays off the dribble. He is always very physical in the low post and can block shots. He can really run the floor and finishes everything in transition with ferocious dunks. The only criticism I have with Grantham’s game is that he spends a lot of time on the perimeter and not enough in the low post, where he can be very effective.

Clemson, Miami, Texas, Virginia and Cincinnati were among the schools recruiting him the hardest at the start of July while Michigan will try to secure a visit late in the process.

Robinson is a top-50 forward with major interest from across the country. Notable suitors include Indiana, Georgetown, Virginia Tech, VCU, Duke, North Carolina. Michigan has inquired and is hoping to get Robinson on campus for visit this fall. Robinson tweeted that he plans to cut his list “very soon”.

Robinson, like many of the best modern day combo forwards, grew from a 6-foot-1 guard to a 6-foot-8 wing over the last several years and his recruitment has exploded. Rivals rates Robinson in the top-25 nationally and was particularly impressed at the LeBron James Skills Academy:

During the spring and early summer, 6-foot-8 small forward Devin Robinson out of Christchurch (Va.) High was the talk of the grassroots circuit. He made a meteoric rise from No. 106 to No. 24 in the 2014 Rivals150 and the way things look he might not be done climbing.

At the recent NBPA Top 100 Camp the five-star swingman showed flashes of what he’s capable of. At LeBron, he’s gotten used to playing against lots of high level competition and has looked really comfortable and at times dominant.

Long and lanky, Robinson is armed with a smooth jumper that he can make with ease from deep, and he’s a very fluid athlete. Around the rim he’s been quite explosive and has started to show what he’s capable of doing off the dribble.

Michigan will have its hands full to try to secure a visit but Robinson clearly fits the bill for what the Wolverines are looking for at the four spot.

Wilson is another west coast prospect that the Wolverines watched in July. USC, Nevada, Colorado, Cal and Boise State are some of his top schools at this juncture. Wilson grew about three inches in the last year and missed a significant amount of time due to a handful of injuries throughout the spring. He was impressive in Vegas and also at the Summer Jam in Milwaukee:

6’8” Cali Superstars forward put his long, athletic body on display over the weekend. Has a knack for doing a lot of things on the court and being very efficient. Wilson rebounds the ball well, handles, looks to get contact in the paint, and shows a nice touch with his left. Uses his length to his advantage on defense as well. At this point Wilson just needs to work on bulking up a bit, and getting a little more consistent mechanically with his shot.