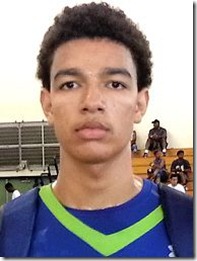 Michigan’s search for a player to replace Glenn Robinson III in the class of 2014 continues to yield new late targets. The latest is 6-foot-8 wing player D.J. Wilson, a native of Sacramento who has caught Michigan’s eye.

Wilson is a versatile player ranked as a top-150 prospect by Rivals. He sees himself as a do-it-all kind of player.

“I’m a small forward who can play on the perimeter and if I need to I can play in the post,” Wilson said during an interview on Sunday. “I shoot the ball well for my size, I can handle it, I can pass well, good decision-making. I can rebound and block shots. I try to do it all on the court.”

It was undoubtedly Wilson’s ability to fill multiple roles, along with his impressive length, that grabbed Michigan’s attention at a recent AAU tournament in Milwaukee. Throughout the week following the tournament, Michigan began expressing interest. From there, contact between Wilson and the Wolverine coaching staff picked up quickly.

“It first started after the tournament in Milwaukee and I talked to coach Vall (LaVall Jordan),” Wilson said. “He was at all my games. I texted with him throughout that week the following week, which was last week. I talked to him on the phone a couple times, and then the head coach called me two days ago.”

When he talks with Michigan’s coaches, Wilson said it’s mostly regarding his family and his game, but they make it clear they would like to see the talented wing in Ann Arbor this fall for a visit. As of now, Wilson has no solid plans but he said that he’s “trying to schedule a visit up there for I think mid-September.”

It appears the Michigan interest is fairly serious, and Wilson has become the latest in a slew of new 2014 wing players to pop up on Michigan’s radar.

The Wolverines are getting in late on Wilson’s recruitment. Some of the schools who have been on Wilson for a while include many from the West coast: USC, Cal and Nevada have offered, and he’s also receiving interest from the likes of Stanford, Washington State and Arizona State. With all these choices, Wilson said academics are most important when it comes to making a decision.

“Number one is academics first,” Wilson said when asked what he’s looking for in a school. “Following that is basketball, as far as the playing style, the coaching, the players themselves, the environment.”

As far as Michigan goes, Wilson has done his homework and likes what he sees on both the academics side and basketball-wise.

“I researched their academics, the school itself. It’s good academically,” Wilson said. “Obviously the basketball program has achieved a lot and they’ve been successful. I like the coaches so much, and I’ve heard of them. There’s nothing I can say that’s bad about them.”

Wilson was also able to watch the Wolverines play in the NCAA tournament this past season. He came away impressed with Michigan’s style of play and the fact that the team likes to get out and run.

Further, Michigan’s coaches have stressed to him that they see him as a possible fill-in for Glenn Robinson III, assuming Robinson has the sort of season most expect him to have next year.

“The coaches all tell me that I’d kind of be filling the void of Glenn Robinson if he left,” Wilson said.

Wilson has no set timeline at this point regarding when he’d like to make his decision. However, he will be cutting down his list of schools soon, within the next few weeks. From there, he will make some concrete decisions about his visit schedule in the fall.

For now, Wilson looks to continue to improve, working on his post moves and overall explosiveness.

“I just been in the gym every day with my trainer just working on various things, working on attacking the basket, my low post game, finishing with contact,” Wilson said. “Trying to get faster and increasing my foot speed.”